Horror in the church 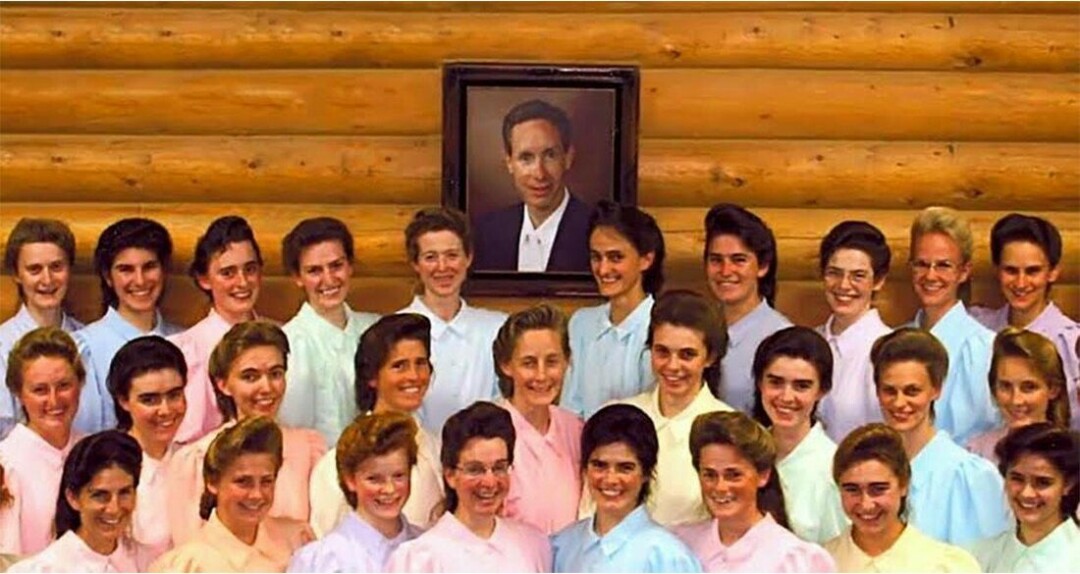 A photo of Mormon “Prophet” Warren Jeffs looks down on a few of his 69 wives, all of whom wore the same hairstyles and pastel dresses.

Want to watch a true and absolutely gut-wrenching horror story about a real monster worse than all the fictional Jasons and Freddies?

Keep Sweet: Pray and Obey is a four-part documentary that showed up on Netflix this month and tells the unbelievable story of a Mormon fundamentalist sect that created sheeple through fear and intimidation, but always with the message to girls and women in the sect – Keep Sweet, no matter how awful your life might seem.

I’ve long been of the opinion all religion is a fear-based fraud invented to keep sheeple in line. Fear-based religious laws certainly pre-date the current police state we live in.

When you look at any religion with a clear eye and uncluttered mind, it does not stand up to investigation. Perhaps no religion is so obviously phony as Joseph Smith’s Church of Jesus Christ of Latter-Day Saints.

There is disagreement about whether Smith’s 1826 appearance in a New York court for defrauding a farmer, Josiah Stowell, by charging him to find treasure on his property, qualifies him for the title “con man.”

Smith told Stowell he could see up to 50 feet underground by looking into a smooth stone about the size of a hen’s egg.

This would be six years after God first spoke to the then 15-year-old Smith, who had gone to the woods to pray to help him decide which church to attend. Two “personages” appeared and told him not to join any church because their doctrines were wrong.

And the court case was just three years after the 1823 appearance of an angel named Moroni (first name Boney?), who directed Smith to a stone box that contained golden plates with teachings that became the Book of Mormon.

Mormons believe that claptrap, and it seems non-Mormon Smith apologists believe he was not a con man – he just had a very active imagination.

So, basically, it’s a religion founded on nonsense, just like every other religion, for people who feel they need a pre-approved direction for their pathetic lives.

So, let’s fast forward deep into the 20th century to find a fundamentalist sect of Mormons who illegally continue to practice polygamy and worship a prophet – Rulon Jeffs, or “Uncle Rulon,” as his followers called him. Followers are told will live forever to lead them to Zion.

But then in 2002, whoops, the 92-year-old prophet dies and does not come back. What the heck? Who’s running the show now?

At the time of his death, Jeffs had something like 70 wives (several of whom were still teenagers when he died) and 65 children. It was one of his sons – Warren Jeffs – who decided he was the chosen one and took up his father’s mantle, which included making most of his father’s wives his own.

This is the fascinating and horrific story told in Keep Sweet: Pray and Obey.

Keep Sweet was a phrase developed by Rulon and promulgated by Warren to keep girls and women in line with the way prescribed by the Jeffs.

That could mean giving up your young daughter to a respected married man in the church, or, when Warren Jeffs started getting rid of boys and men in the community, assigning wives and children to new men and families. And they all just go along with it under the name of religion.

The church ran a town called Short Creek, Az. Even the cops were hired by and reported to Jeffs.
Watching this documentary, you have to wonder at the absolute stupidity of the human race. Why didn’t these sheeple just leave so these monsters could no longer influence their lives? Why didn’t someone do something?

We learn that these fundamentalists preach end times are coming. They must stay together on the same piece of land so on Judgment Day God can lift them all to Zion. Yes, he will raise the land they are on.
Ugh! Pull the other one. All those suckers believed the apocalypse was nigh and disbelievers (Gentiles) would be left behind.

One follower talks about the community’s complete ignorance of the Gentile world. She had no idea who the President of the United States was because Uncle Rulon and then Uncle Warren were of a higher authority than whatever jerk was running the country.

Through his writings and teachings Jeffs also revealed himself to be a racist with comments such as this: “The black race is the people through which the devil has always been able to bring evil unto the earth.”

So why didn’t anyone notice what these weirdoes were up to?

Oh, they did. But because we are a god-fearing nation that has too much respect for religion, even one as crackpot as the Fundamentalist Church of Jesus Christ of Latter-Day Saints, we let the nuts “worship” in peace.

A former member of the church – one of two of Warren Jeffs’ brothers that he booted out of the church, forbidding their large families from ever communicating with them and reassigning their wives to faithful male members – says the church instills in male members the idea that they must have at least three wives to attain heaven. That brother was 50 years old when Warren Jeffs stripped him of his family.

The documentary really gets interesting when Warren secretly establishes a new location for his faithful that he calls Zion. It’s actually just outside small-town Eldorado, Texas.

One of the documentary interviewees is the owner/editor of the Eldorado weekly, who says residents at first had no idea that people at the compound were following beliefs he thought had “been consigned to the ashcan of history.”

A few young women do escape, and one of them proves to be the downfall of Warren Jeffs. He had married this 14-year-old girl off to a married man. The state decided to prosecute Jeffs for accessory to rape and sexual abuse of a child. He went on the lam with all the resources of the church at his disposal– and they were vast. One interviewee who helped funnel money to Warren when he was on the run said he was receiving up to $300,000 a week.

He’s put on the FBI’s 10 Most Wanted List, along with Osama bin Laden.

While on the run, he lives the high life, doing all the things things he warned his flock of in the Gentile world – Disneyworld, strip clubs, wearing Gentile clothing. Faithful church members assist him in keeping him hidden and the money flowing. He had $55,000 in cash when he was captured after a simple traffic stop in 2006.

There were also claims that Jeffs sexually abused boys as well, including a brother who is said to have committed suicide because of it, but he was never prosecuted for that.

Jeffs was sentenced to life in prison, but the documentary shows that he continued to run the church from prison. In 2012 he told followers the end was coming in 2013, but we’re still here.

Jeffs has reportedly attempted suicide several times in prison. He supposedly still has supporters who believe he was wronged.

And the sect itself? The documentary doesn’t explore its fate but you have to believe that he still has followers who believe in “plural” marriages and the message to “Keep Sweet.”