A cool week of music 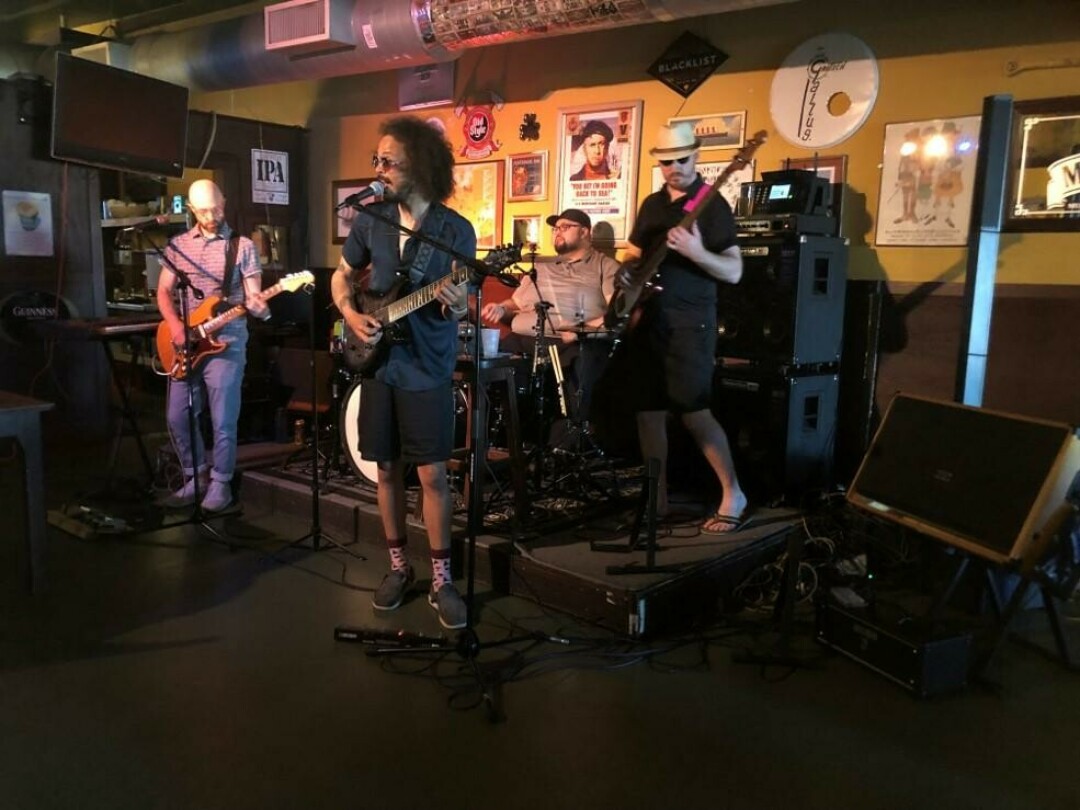 The opportunities to hear live music has continued to proliferate in the days leading up to the summer solstice on June 21.

With later sunsets giving us longer days, outdoor venues would seem to have been the preferred option. But hold it, this is Duluth and the weather wasn’t particularly cooperative this past week.

In general, I try to see musicians I haven’t heard previously – though it seemed the folks I was interested in hearing were playing indoors, while those I have seen (and reviewed) were playing outdoors.

Born Too Late, joined by Shane Nelson, kicked off this season’s Chester Bowl Concert Series at 7 pm on Tuesday, June 14. A sizeable crowd showed up to the first of the weekly concerts despite the very cool temperatures.

We were treated to a wide range of covers: Beatles, Fleetwood Mac, the Temptation’s “My Girl” and a medley of Johnny Cash hits. I was impressed once again with their harmonies and interpretations of the standards. Specifically, “Proud Mary” and “Me and Bobby McGee” highlighted Rokkyn Nelson-Kavajecz pipes.

The next evening I decided to head indoors to hear Emma Jeanne at the Cedar Lounge in Superior as I had not seen her during the Homegrown Music Festival. She was playing an electric guitar solo to a small bar crowd.

I’m afraid I was not overly impressed, due largely to her loud guitar strumming that completely obliterated the lyrics of the songs she sang. I wondered whether an acoustic guitar wouldn’t have been a better instrument for her.

Thursday, June 16, another nice evening weatherwise, found me indoors once again, this time at Carmody’s Irish Pub. I chose to check out the band, Indecent Proposal, consisting of Josh Brown on guitar, Sevin Joki on drums, Terry Beckman on bass guitar and Pete Dotson on guitar.

The band did not perform during Homegrown, so this was another first listen for me. In this case I was more than pleased with what I heard. It was really high-test rock and roll with a number of original tunes, one being “In the Morning,” as well as covers. “Tennessee Whiskey” by Chris Stapleton was particularly well presented.

I was so taken with this band I headed back to hear them again at Carmody’s the following Saturday, when the place stayed open late to cater to the Grandma’s Marathon crowd. 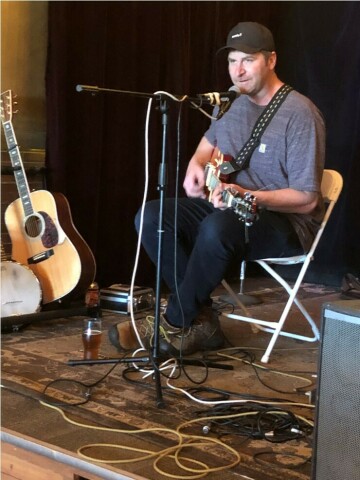 On Friday, June 17, I was back at Cedar Lounge to hear Rory James, who was featured as one of the Reader’s “Magnificent 7” in last week’s edition. He was another performer I missed during Homegrown.
Playing both acoustic and electric guitars to a handful of attendees, he sang original tunes along with covers. “Addicted To Love” was one of his originals I quite enjoyed. Another good one was a 1960s draft protest song wherein the protagonist is a young man who fled to Canada.

During his break, James turned over the stage to Abe Curran, a solo musician, another performer I missed during Homegrown. Unfortunately, I arrived a bit late and only got to hear one of his numbers.
The “Rock the Park” concert at Memorial Park on Saturday was a benefit for Valley Youth Centers. The temporary outdoor stage provided shelter to the musicians from the rain, but not the cold – temperatures did not rise above 55 degrees which accounted for a low turnout and a lot of tuning of guitars.

Tommy Wotruba performed a wonderful dual set, covering a slot meant for Whiskey Trail which didn’t show. Though I had heard him recently in a private gig, this one showcased his deep repertoire of covers. Beginning with Otis Redding’s “Sitting on the Dock of the Bay,” Wotruba moved seamlessly into tunes by Pink Floyd, The Band, Led Zeppelin, Big Mama Thornton (“That’s Alright” popularized by Elvis), Bob Dylan and many others.

The much more recent “You and Tequila,” recorded by Kenny Chesney in 2011, was a hoot and the song “Follow Your Heart” turned me on to The Scorpions, a German band I had never heard of.

In another vein, Wotruba played his mother’s favorite, a country pickin’ instrumental, “Wildwood Flower.” Finishing out his second set with a rousing rendition of Johnny Cash’s “Get Rhythm” led the audience to demand “one more!” 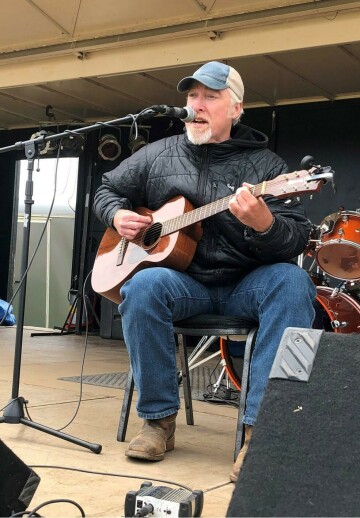 Next up was BoomStick, “the weirdest cover band in the Twin Ports” according to its FaceBook page. I had wanted to familiarize myself with them and discovered John Sequin was a member. (I had heard him solo previously.)

The band is known for driving heavy metal tunes, and they delivered on this day. Their cover of Blondie’s “One Way or Another” was one of the songs I actually recognized. With the wind picking up and the temperature dropping I took a break about halfway through their set, returning in time to hear Virgil Caine.

I had to laugh when I recognized three guys from BoomStick were members of the Virgil Caine band as well. It too played covers, including Dylan’s “Knockin’ On Heaven’s Door,” along with several originals, “Flat Tire,” “The Cat,” and “Time I’ve Been Given.”

As usual, Mark Hawley’s blues harp raised the vibe to the highest level and made dancing imperative.

Movement also helped counteract the falling temperatures – 48 degrees by that point with a cold rain shower driving me and many others away.

Too bad I didn’t get a chance to hear the headliner band, After Shock. Next time!

I must say that it’s commendable how often these same bands and individual performers donate their time and talent to such causes. It’s also a testament to how much they love to play for live audiences.