Mysteries in the fen 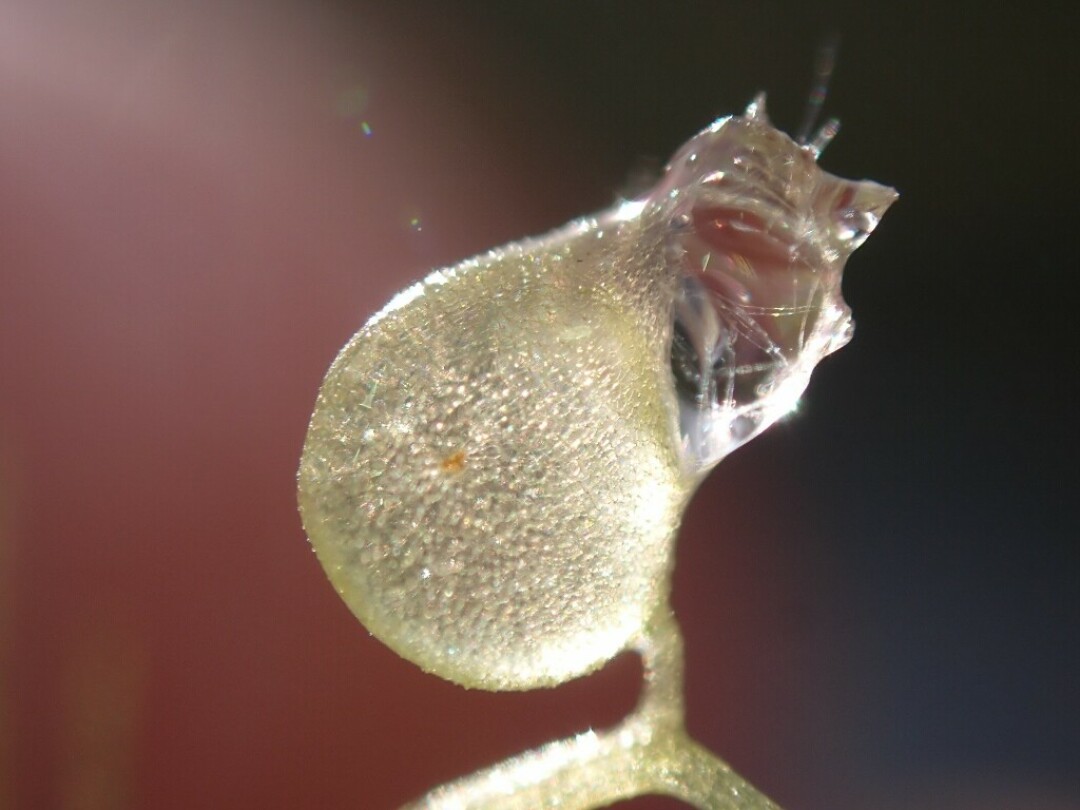 This translucent bladderwort trap is also a stomach. Tiny aquatic creatures trip trigger hairs, get sucked in, and then digested. Photos by Emily Stone.

The warmth of the water was comforting, and I reveled in the textures on my soles. One step sunk into fuzzy sphagnum moss and the next oozed silky muck up between my toes.

It’s hard to believe this all was frozen solid just a few months ago. I moved cautiously, placing each foot deliberately and testing the substrate before shifting my weight and committing to the step.

Caution was warranted not only because I was barefoot and wary of impaling myself on a hidden stick, but also because I was nearing the edge of one of several pools of open water that dot the bog mat.

I’ve tried to measure the depth of these pools – but ran out of gear at 95 feet. The bog mat that supported us above those fathoms was simply a woven mass of poorly decomposed vegetation called peat.

Cade and Olivia, the Museum’s two new Summer Naturalist Interns, were exploring the fen (like a bog but with groundwater flow) with me. A dark mass of adorable, wiggling toad tadpoles pulled us toward the edge of the open water first.

Then Cade spooked a young garter snake out of a clump of leatherleaf and it swam to safety on a little island of peat. Dragonflies and damselflies darted around the stems of bog rosemary, sedges, and other wetland plants at the water’s edge. Their shimmering wings added an aura of magic.

“Oh!” I exclaimed happily, as a submerged plant caught my eye. Its thin, branching, bottle-brush leaves looked somewhat similar to coontail or even watermilfoil, but I knew better. “Bladderwort!” I exclaimed.

I’ve written about this carnivorous plant with yellow snapdragon-like flowers before.

Pulling up the whole plant – this species grows as a free-floating leafy stem less than a foot long – I found the namesake bladders. Smaller than an apple seed and of a similar shape, the translucent capsules sparkled in the sun. That beauty is deadly.

Each bladder, nestled among the thread-like leaves, is a trap with a door that opens inward. The plant can pump water out of the bladder, flattening it and creating a vacuum inside. Bristles near the trapdoor look like a good feeding habitat and act to funnel tiny prey toward their demise.

When a minuscule invertebrate nudges trigger hairs near the door, the flap swings inward and sucks in both water and lunch. The door snaps shut as the bladder fills.

Digestive enzymes and resident bacteria digest the prey, which takes anywhere from 15 minutes to two hours, depending on their size. To reset the trap, the plant uses special cells to pull nutrient-laden water into the stem. Not only does this feed the plant, it restores the vacuum that is essential for the capture of future prey.

There are more than 200 species of these hungry little plants worldwide, and although they live everywhere except Antarctica, their centers of diversity are in South America and Australia.

Across all of their range, they live in moist soils or open water that is nutrient-poor. Their carnivory compensates for that deficiency.

It’s kind of neat that we in the Northwoods have something in common with the tropics – but there’s one BIG difference, right? Winter.

The stem of bladderwort I picked up had more than one type of bulbous appendage. In addition to the pale bladders, at one end was a green mass the size of a pencil eraser. This is the key to their winter survival.

The shortening days of late summer induce the formation of this turion – a dormant bud that is capable of growing into a complete plant. It is essentially a shoot that waits to elongate.

All the leaves and stems are there – just crowded together. Many aquatic plants overwinter as turions. 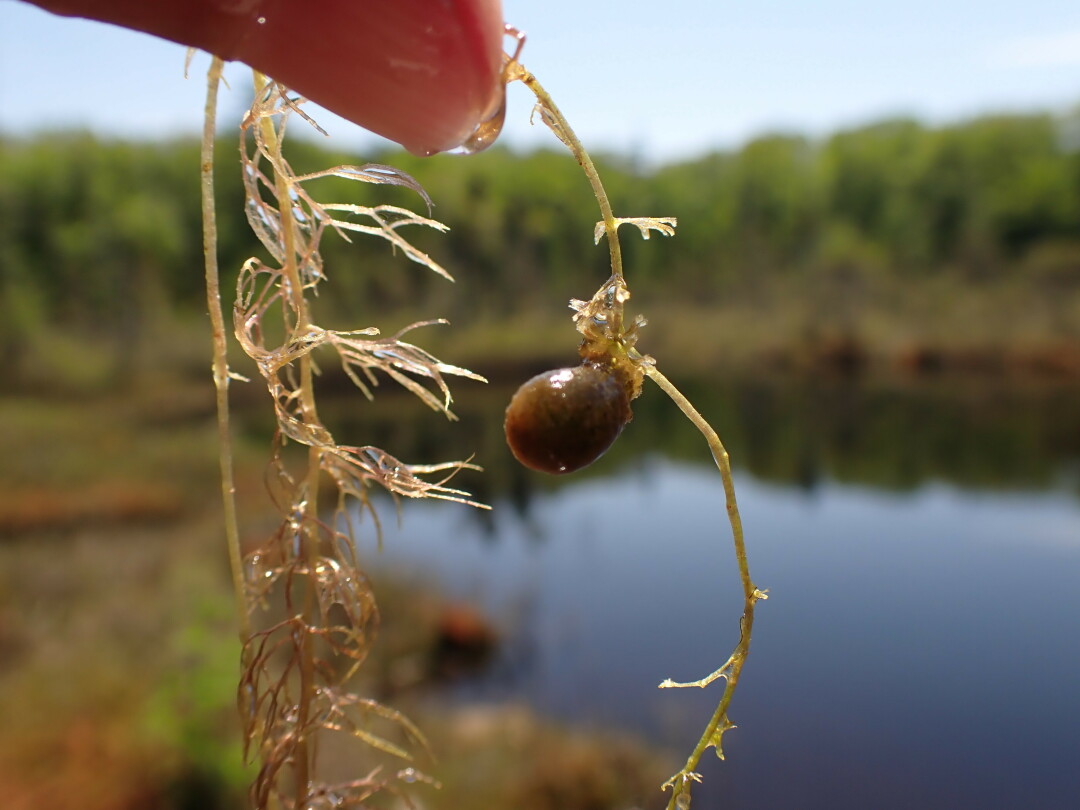 Curiously, the same plant hormone (abscisic acid) that triggers trees to lose their leaves in the fall also instigates bladderwort’s turion formation and keeps them dormant even through balmy fall weather.
As winter approaches, the dying stem drags its attached turion to the bottom of the pond, out of reach of killing ice.

In the spring, warming water triggers changes that increase gas content. Supposedly, the turion then detaches from its mother plant and rises to the surface, breaking dormancy after just two warm days.

But along the edge of this pool in the fen, I found several turions that had not started expanding and were still attached to their stems.

What happened? Did they sink down 95 feet and then rise back up? Did they nestle into a corner of the bog mat and use sphagnum as a cozy blanket? When will they begin to grow?

And what new mystery will I discover the next time I go squishing around this magical place with muck between my toes?