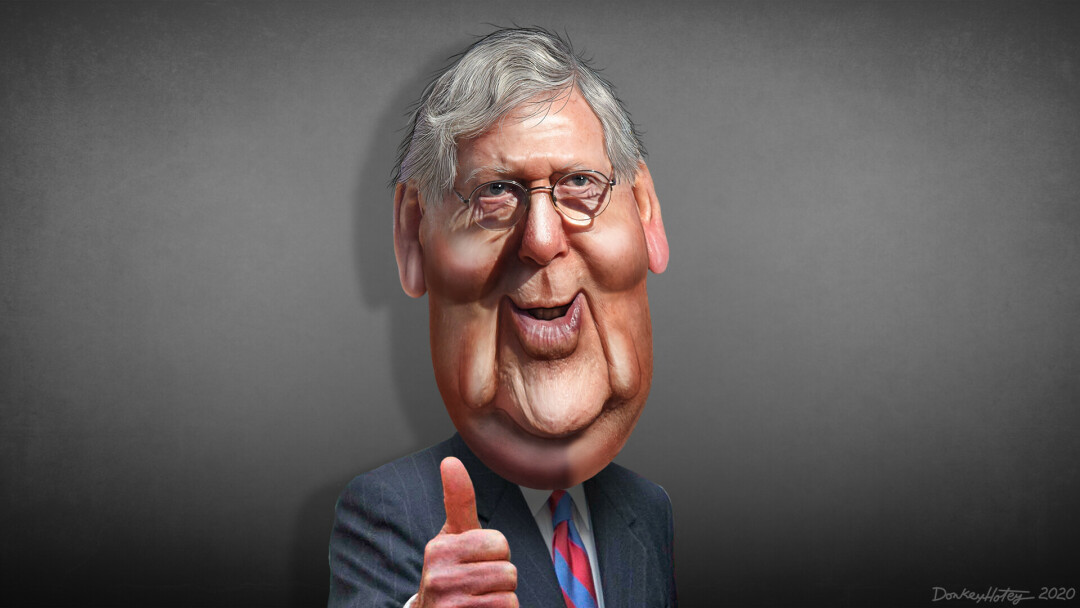 How do you deprogram 52 million cult members?

In a recent poll, 52 million Trumplicans of the gun cult said they were willing to sacrifice several thousand U.S. children each year in order to keep the Second Amendment on the books. On top of this alarming declaration, our last two presidents have serious problems with reality.

In a complex world going through climate change, autocracy, economic inequality, racial discrimination, abortion and religious persecution, we needed philosopher-kings instead of one president without reality and another who can’t recognize it.

For one, Donald Trump, because he is a malignant narcissist with the qualities of mental illness of the sociopath and psychopath as defined by modern psychiatrists and psychologists, he is incapable of even recognizing reality. His “Big Lies” and his 31,000 cataloged as “other ones,” are a well-known testament to his mental condition.

When his former Attorney General Bill Barr testified at a Jan. 6 hearing that Trump often departed from reality, he was terribly wrong. Trump was never “there.”

As Barr said: “It was all bullshit.” He is classified as a victim of antisocial personality disorder. If you have doubts, read the DSM-5 Diagnostic and Statistical t Manual of Mental Disorders (5th edition) approved by the American Psychiatric Association.

When Joe Biden was nominated to run for president as the Democratic candidate, I thought he already acted as an old man at 78. He had no platform to bring new young voters to his campaign except his 44 unexceptional government years as a senator and vice-president. So, in an “anyone-but-Trump,” election he had a chance.

He actually won on a progressive platform put together by Senators Bernie Sanders and Elizabeth Warren, two leaders who face reality and come up with solutions to major political and economic problems.

For 36 years Biden had only one major interest – getting elected. We needed a revolution in 2020 but got a “normal”catastrophe. Now we are faced with hundreds of anti-voting laws, the closing of hundreds of abortion clinics and the inability of the federal government and half the state governments to act in the public and common interest.

Biden was going to work with that great American Senator Mitch McConnell who has destroyed the United State Senate as a trusted lawmaking body. Living in some alternative political universe in his senile years, at the National Prayer Breakfast this year, Biden described McConnell as a “man of your word,” “a man of honor,” and added: “Thank you for being my friend.”

After what McConnell did to get three freaky, anti-woman justices twisted by Catholicism on the Supreme Court. The Court will bring us another Inquisition or change the country into another South Africa before apartheid.

Once upon a time we believed in government and its representatives

Back in 1964 the Korean War had ended 10 years before and Americans still trusted our government with a positive rating of 77%.

I had joined the Marine Corps Reserve in 1950 because the Corps promised I could graduate from college and then serve on active duty as an officer if I took summer training in a special program called the Platoon Leaders Class. I was paid as a corporal for four years and then passed Officers Candidate School at Quantico.

I then spent three years on active duty on the East Coast, Cuba and the Caribbean area. Consequently, I have had a keen interest in all our wars since.

Last week the Pew Research Center released a trust in government poll taken this year. Our trust level is now at a horrendous 20%.

Why the precipitous drop into the crevasse? Well, as Ronald Reagan might say, we might ask Eisenhower, the Dulles brothers, the Bundy brothers, Kennedy, Johnson, Nixon, Kissinger, the Bushes W. and George, Obama, Trump and Biden.

Because all wars make a lot of money for somebody, Eisenhower, with his experience as a 5-star general, warned us of the military-industrial complex forming in the U.S. (“Something wicked this way comes!”)

The Dulles boys, Secretary of State John Foster and Allen as Central Intelligence Agency head, told us that the Chinese commies would “domino” Asia if we didn’t intervene in Vietnam. Eventually we got our ass beat by little guys carrying a pound of rice and a rifle for sticking our nose into the middle of a civil war.

If capitalism is better than sliced and buttered bread, how come old-time Republican conservatives are so frightened by Karl Marx? Was there really a commie under every Democrat’s bed?

Later came the Bundy boys in Vietnam policy, sometimes called “The best and the brightest” in Washington. McGeorge served as National Security Advisor and Bill was a fixture at CIA and the Pentagon. They were overshadowed by Tricky Dick and Horrific Henry, who still doesn’t travel to Chile, Argentina, France and Spain because judges might want his testimony about certain war crimes he committed while in office. Some policy experts have estimated Nixon and Kissinger added 20,000 names to the Vietnam Memorial in saving their faces and asses between 1972-75.

When Dubya and Co-President Cheney attacked Iraq because 15 Saudis flew airplanes into the World Trade Center and the Pentagon on 9/11, people wondered why. Cheney loved oil because he got rich from it. He thought we should have all that oil under Iraq. We had already attacked Afghanistan to punish them for giving Osama bin Laden a home base. We bombed it for a week and then had our hired help chase the Taliban out of the country.

A Russian general warned us that we could bomb the Taliban into the Stone Age, but if we stayed longer, we would be forced to leave with our tail between our legs. Twenty years later they shot our tail off and the Taliban gave Biden the Muslim left-hand middle finger as we ran for cover in C-17s chased by thousands of frantic, dashing Afghans. A chaotic picture that will live in infamy – next to the film of 70 Marine helicopters flying 8,000 people from the roof of the U.S. embassy in Saigon to our fleet at sea.

These are just a few of the reasons Americans lost their trust in government by an astonishing 57 points in just 57 years.

How many shares of stock can be traded in a New York millisecond?

Companies and corporations doing business in a few states or in many may incorporate to be regulated by the laws of any state they choose. Gee, do you think they look at tax and labor laws, freedom from liability for managerial actions taken in making business decisions, certain protections from unwanted takeover bids, secrecy in conducting “offshore” tax deals in tax havens, reasonable annual fees and other regulations concerning corporate operations? The corporation might also look at the state courts and how they make judgments whether by jury, judge, or arbitration rules.

One might think that a state dominated by Trumplicans would have the most attractive incorporation regulations, rules, talented regulators and cheap fees than a state controlled by moderate and progressive Democrats.

Would you believe Joe Biden’s Delaware is the most “popular” state to incorporate in? It has been in the incorporation business for more than a century.

Delaware leads the states in domestic and international incorporations, with more than one million corporations choosing it as a cheap home. More than 300 of the Fortune 500, including Walmart and Facebook, use Delaware as home base.

One might think Bentonville, Ark.,0 might be Walmart’s home. I’m surprised South Dakota is not Walmart’s home. A main competitor of Delaware in the incorporation racket, it has attracted international and domestic incorporations by emphasizing privacy rules, cheap fees and “reliable” courts.

What does President Joe Biden believe?

Joe Biden, to stay elected for 36 years, has had to defend the incorporation rules of Delaware for more than a half century.

I have been following Joe for 60 years. I still don’t believe a word he says because he follows instead of leads. What does he really stand for?

To me, he’s just another Trump “believing” for moments which will get him elected. He’s been claiming lately he’s a union man. He hasn’t said a word about the tremendous effort made by underpaid workers to unionize Amazon and Starbucks, although the attempts are in the news each day.

Statehood for Puerto Rico and Washington, D.C.? D.C. would be the third smallest state and Puerto Rico would be 37th in size. (Joe: each state gets two senators. The Senate would be 54 Democrats and 50 Trumplicans. Do it!)

I have never witnessed a White House doing nothing so well. Escaping Afghanistan as Joe did was a personal, national and international disaster. I see most of our aid for poor Afghans has ended up in mansions owned by Kabul con men, ensconced in various rich ZIP Codes around the world running to safety from the Taliban.

American taxpayers will be happy to know that Bush, Obama, Trump and Biden did such a great job supervising our billions in aid to the anti-Taliban that President Asraf Ghani escaped to Abu Dhabi with his helicopter – allegedly unable to carry all of his loot – just prior to the total collapse of his Afghan government.

Finance Minister Ekhil Hakimi has ended up in California, allegedly buying at least 10 oceanfront properties. Many Afghan con artists in the 20 years of our “sacrifices” of troops and billions are presently living in mansions in Turkey, United Arab Emirates, London and Washington, D.C. bought with cash in our dollars.

Why didn’t we immediately challenge Vladimir?

Further, I will never understand our lily-livered approach to Vladimir Putin and his attack of Ukraine. Everyone in the world except the European Union and Joe Biden knew Vladimir wanted to become more powerful than Peter the Great and create a Greater Russia.

When he parked his first tank or rocket truck or howitzer on the border, we should have sent Vladimir a message: “The European Union and the United States of America just sent Javelins, bigger rockets, howitzers and cruise missiles to Ukraine along with ammunition for other weapons. If you continue to prepare for war, we will continue to build Ukraine’s ‘lock and load’ arsenal whenever you park another tank or truck on the border.”

Like Trump, he’s just another one of the world’s autocratic bullies loosing himself on the world. Vladimir is comparing himself to Peter the Great. We have studied him. Vladimir, you’re no Peter. You’re more like Joe Stalin.

While the arc of history continues to widen because of human innovation, so does the arc of distrust. Life is changing so fast we no longer trust regulators or each other.

As an example, in the 1970s most stocks were owned by individual shareholders who held on to the stocks for an average of seven years. Investment banks and institution investors now hold stocks for an average of seven months. High-frequency electronic trading has now divided Wall Street into predator and prey. Fortunes are made or lost in milliseconds by the buy-or-sell stroke of a key, how long the fiber optic cable is between trader and market, and how effective mathematical algorithms function.

Without trust, the crevasse is widening.