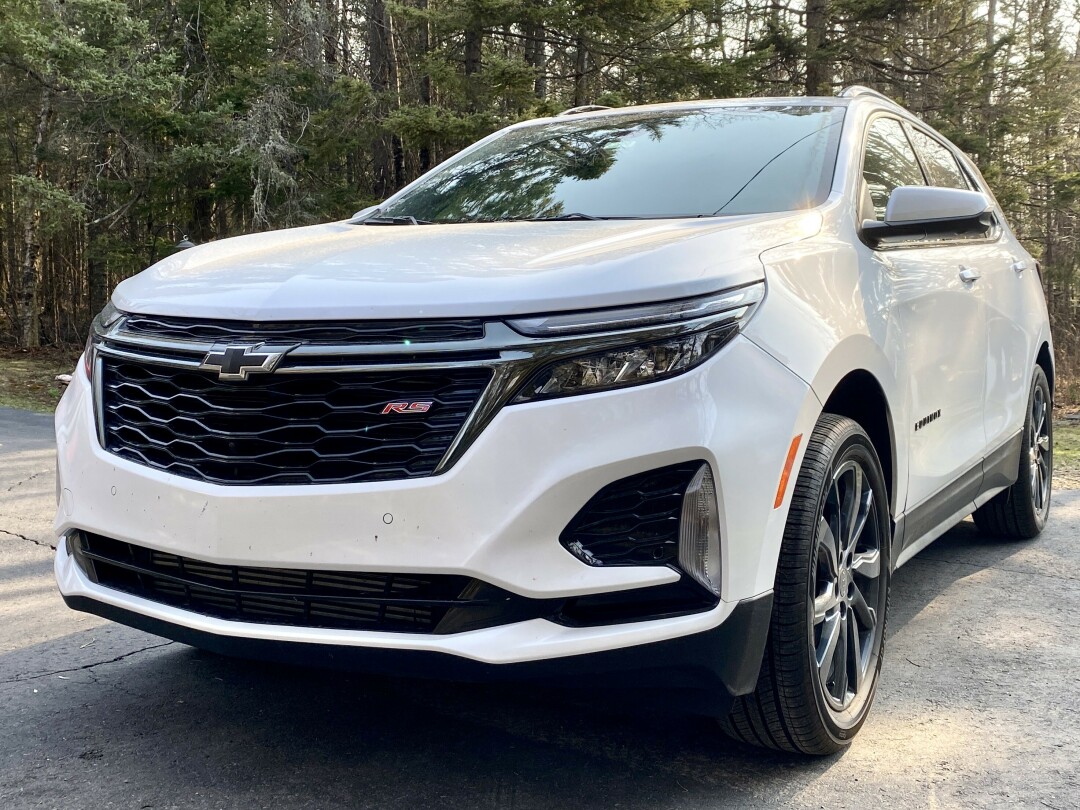 As we’ve watched the Chevrolet Suburban grow from what was really one of the originators of the family-hauling utility wagon, we’ve become conditioned to accept the need for a 5.3-liter V8 or even larger to pull our growing families around.

And Chevrolet hasn’t minded reaping the profits from the Suburban and its smaller sibling, the Tahoe.
But with tightening budgets, to say nothing of emission laws, coupled with the inevitability that our kids grow up and move away, the modern question becomes: Do we really need such a big SUV and do we really need the gas-guzzling V8 engines to haul us around.

The answer has generally been supplied by foreign companies, but Chevrolet is aware that its customers base is a lot different these days, and smaller, lighter SUVs can do the job for empty-nesters and for new, young families as well.

That’s about where the 2022 Equinox comes into the picture.

Chevrolet, and its parent General Motors, are talking in grand terms about switching over to electric powertrains as this decade rolls along, but while we await what now seems to be an inevitable move to EVs, people need transportation now, and many of them prefer smaller, lighter and more economic SUVs to get the job done – including the occasional trip to see the kids and grandkids.

The new Equinox is surprisingly impressive to drive and live in. I don’t mean surprising because it’s made by Chevrolet, just impressive because Chevy has been the target for so many economical and compact SUVs that it’s a surprise when Chevy produces one itself, to take on the new breed.

l had the opportunity to spend a week driving an Equinox in its newest RS trim, which adds a few sporty touches, and meets pretty much all the requirements of a contemporary family-hauler. It feels light, but not skittish, and the fact that it had all-wheel drive might have made it feel more stable than an only-front-wheel-drive might. It had good agility, which also means good emergency-handling characteristics.

No, it wasn’t powerful enough to consider drag-racing your neighbor’s Suburban, but its sleek shape and attractive contours make it look good in the driveway as the neighbors go by. And it is quick enough to be able to zip onto the freeway entrances easily and pass slower traffic without difficulty.

That, too, is surprising perhaps, because the Equinox is powered by a comparatively tiny 1.5-liter 4-cylinder engine, turbocharged for maximum output from such a diminutive power plant.

No, we didn’t go off-roading, be-cause it’s not in the Jeep segment, although if you’ve been to Duluth, you know the city streets take an extra beating from the severity of the winters, and many urban or rural roadways are a lot like navigating off-road challenges.

In that regard, the Equinox was quiet and stable over the rough roads, another nice feature.

And the interior comfort and convenience features work out well, too. For a vehicle that has a base price of $31,700 and an as-tested sticker of $37,015, those attractions make it economical from the showroom on up.

The WPA estimated fuel economy is 25 miles per gallon city, 30 highway. We drove it both ways, and our overall average was 28.9 mpg.

The gleaming white paint was extra-gleaming because it was “iridescent pearl tricoat,” and not just white, which incurred a $995 ransom on the sticker.

The RS edition comes with black roof rails and a special black grille, and functionally the Stabllitrak stability-control system with traction control conspire with the stability of 19-inch wheels to help assure you of control.

Heated front seats and leather seating both front and rear add to the classy image, and the headlights, daytime running lights and taillights are all extra-bright LEDs.

For safety, the Equinox has forward collision alert and rear cross-traffic alert, and front and rear park-assists are enhanced with lane-change alert and blind-zone alert. It also has lane-keep assist with lane-departure warning, invaluable if you tend to meander out of your lane, as we all do sometimes.

Connectivity is a huge feature of contemporary car owners, and the Equinox does an excellent job there, too. The RS leather package is complemented with a Bose premium audio system with seven speakers and excellent sound.  Apple CarPlay and Android auto are built in, and Bluetooth audio streaming is available.

The navigation system includes an 8-inch color touch screen with voice recognition, and data and power ports are conveniently located.

The Equinox fit in well size-wise with the array of Chevrolet SUVs, bigger than the Trax or TrailBlazer but not as big as the Traverse or Blazer, and certainly not close to the Tahoe or Suburban.

Chevrolet is able to keep the price down to around $30,000 by building the Equinox in Mexico, and making both the engine and 6-speed automatic transmission in Mexico as well.

Chevrolet says 36 percent of the Equinox is of U.S. or Canadian origin, while 40 percent of the major content is from Mexico, and the vehicle is assembled in Mexico.

Part of a clever revision of its SUVs, Chevrolet created the Equinox to be economical, and then added on a lot of creature features that American buyers want and will pay for.

With gasoline costing $5 or $6 per gallon on the West Coast, the ability to get nearly 30 mpg is just an added bonus.