The Furries are coming for us 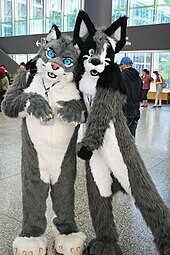 In 1992 after giving a speech at a Congressional District Endorsing convention and drawing boos from most of the Republican delegates, I got a lecture. A solid Duluth businessman told me that challenging the endorsed candidate was wrong and that he couldn’t support me.

Cut to the 2022 convention where I was unable to give a speech. This gentleman’s son, now in charge of his father’s business, engaged me in a friendly conversation.

Knowing what made me the wrong kind of Republican, he set me straight about the world we lived in. He had been talking with business people all over the upper Midwest who, like him, worked with public schools. They had all been sharing the shocking news that their school boards were welcoming a perverse political correctness into the classroom. Children identifying as animals were demanding to be treated like cats and dogs in class and the schools were going along with it. Teachers were being forced to conduct class with children dressed as cats sitting at their feet. Kitty litter boxes were being put in school bathrooms.

Given the businessman’s many eyewitnesses, I listened politely if skeptically. I had been substitute teaching in a school that looked kindly on odd duck kids. I had seen some girls who drew hearts on their noses and who teased their hair to suggest a feline look. However, none of them ever purred or meowed at me.

Did all these businessmen sharing this nonsense and eager to believe it really represent today’s Republican Party?

It’s not a first. Abraham Lincoln famously joked about the Millerites of his era. Mr. Miller, a Revelations reading doomsday-er, convinced thousands of Americans to sell their farms to prepare for the end of days. When his first prediction of apocalypse fell though he recalculated the Bible’s hints. His hopeful End-timesers prepared anew for the appointed apocalypse. When instead another day dawned the Millerites mostly, but never completely, died out.

The End of times has been predicted again and again. The entire last thousand years was a big mistake. We were supposed to come to an end in the year 1,000. The too-eager Millerites only jumped the gun 150 years prematurely. The new counting system made the year 2000 the new 1000. The Bible never lies. God just has tricky math.

As the year 2000 approached good Christian Republicans were primed for the “rapture.” They knew they would be lifted to heaven leaving piles of clothes behind for the damned “left behind” to envy.

At Minnesota Power my wife was one of the people tasked with making sure the computers did not all shut down at the stroke of 2000, thus ending the generation of electricity while airplanes fell from the sky. Both catastrophes were avoided.

Today rapture fever depends on whether Republicans can persuade America that an arrogant used car salesman won a majority of the votes after letting a million citizens die of the virus he bungled.

Maybe God is in on the “big lie” too. After all, an America that will fall for the story that schools are putting cat litter boxes in their rest rooms is sure to snap up Fox New’s “Replacement Theory.” Move over “Chronicles of the Elders of Zion.”

Republicans are allergic to the scientific version of end times. Until they leave their piles of cloths behind they want to keep enjoying cheap hamburgers and leather car seats while suffocating God’s green Earth and dooming billions of species Noah once rescued to oblivion.

I would dearly love to be like Abe Lincoln and find gentle humor in superstitious white voter’s anxieties. But poor Abe. When he called for malice toward none, white supremacist extraordinaire, John Wilkes Booth, shot him in the back of the head.

“I, Pete Stauber, do solemnly swear (or affirm) that I will support and defend the Constitution of the United States against all enemies, foreign and domestic; that I will bear true faith and allegiance to the same; that I take this obligation freely, without any mental reservation or purpose of evasion, and that I will well and faithfully discharge the duties of the office on which I am about to enter. So help me God.”

With Pete in Congress we are safe from the Furries.