WILD still a work in progress 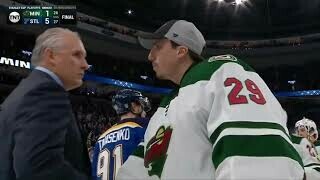 TALMADGE RIVER – The moment it became evident that the Minnesota WILD was going to lose yet another first-round Stanley Cup playoff series I thought it.

I immediately thought about the famed hockey documentary The Russian Five. In this brilliant documentary viewers are given an inside look at what it was like for the Detroit Red Wings to go from a perennial loser and pull themselves back up to being an annual top contender for the greatest trophy on earth and then finally win it.

The futility was long-running though and it was epic. After losing to the Montreal Canadiens in the 1965 Cup Final, they went on an 11-year run with only one playoff appearance and lost out in the first round in that one.

In 1978 they got into the tourney but lost in the second round. They followed it up with another five years of no appearances. Starting with the 83-84 season they began to get into the playoffs on a regular basis.

After not qualifying for the 1990 playoff the Wings made 25 straight playoff appearances. Between then and the 15-16 season they were in eight Conference Finals, winning six. They went 4-2 in the subsequent Cup Finals. That’s a historic run.

What I found so riveting in the documentary was what the club went through to finally return to winning and do so consistently for a long time. They won the Cup in 1955 and would not do so again until 1997.
In the late eighties an assistant GM broached the idea of drafting some Russian superstars and seeing if they could somehow liberate them to come to North America and play in Detroit.

Jim Devellano didn’t know at the time that the Soviet Union was going to collapse in the near future. And even when it did there was no guarantee you could get one of the prized athletes over here to play. The way the Soviets got around the “no professionals” rule of the Olympic Games was to make all of them Soviet Army officers.

They said they weren’t pro-athletes; they were soldiers. The film chronicled the ups and downs of drafting them and then trying to get them here to play. Even with a “liberated” Russia, you didn’t come and go as you pleased, especially if you were a soldier.

There were many issues to overcome to build the team and finally become a champion. Obtaining the talent was only the beginning of that process. There were the obvious language and cultural barriers along with the journey of building and shaping a team into a steady winner.

This film does a masterful job of showing all of it right down to the personal emotions involved. I often feel the “blood, sweat and tears” analogy is worn out. Not in this case. It brings the viewer right into the locker room and onto the team. Without question there was voluminous blood, sweat and tears involved.

In the aftermath of the WILDs series loss it was my initial thought. It is a process I’d remind myself. I can’t tell you there wasn’t an immense feeling of emptiness because there was. I didn’t tear up my house though. Nothing was thrown in a fit of rage – no need for a three-day bender. I had an even perspective.

So. The WILD were eliminated from the tourney in six games. G1 was a 4-0 pasting at the hands of the STL Blues. The WILD would rebound and take the next two tilts by 6-2 and 5-1 scores to take a 2-1 series lead.

And then it was over. Three straight losses of 5-2, 5-2 and 5-1. The worst part was the Blues appeared to be in better shape than the WILD and were more focused. It left me wondering if the WILD had expended too much emotional energy in their quest to gain home ice.

They got it and it did nothing for their playoff chances. In G5 they had a chance to regain home ice and failed.

I opined before the series the WILDs path to advance would be to keep it at five on five and avoid having to depend on their special teams to bolster their chances at a series win.

There were no close games. In each of the six tilts the wins were decisive.

In another twist of fate the team announced future HHOF netminder Marc-Andre’ Fleury would start G1 rather than Cam Talbot. I thought about it and decided not to overanalyze. They both finished the season strong and I wasn’t going to second guess the WILD brass and their staff. I was a bit concerned though.

In Fleury’s last year on the VGK, I could see small parts of his game changing. The reflexes and footwork weren’t the same. While on the Chicago Blackhawks before the WILD trade, I could see the same thing, only more concerning.

The WILD put a better team in front of him than the Hawks, but I had concerns.

Before the tourney began I concluded that the team was winning regular-season games because they were outscoring opponents. It wasn’t because Fleury was taking games for them, or even Talbot for that matter.

At the end of the series, would it have mattered who was between the pipes for the team? Probably not. Fleury was pretty good but I wouldn’t bring him back next season.

But realistically, it doesn’t matter who is in goal without some improvement on defense.

I feel STL Coach Craig “Chief” Berube outcoached Dean Evason in the series. He was not hesitant to make adjustments and quickly made changes when he deemed them necessary. Pulling series starting netminder Ville Husso for Cup winner Jordan Binnington turned out to be their tonic.

Evason, perhaps under a push from GM Bill Guerin stuck with Fleury and by the time they switched to Talbot it was too late. Fleury ended up 2-3 for the series with a SvP% of .906 and a GAA of 3.04%.

Even so, the team had a chance to take G6 and go home for a G7. They couldn’t have looked more lethargic and outmatched in G5 and G6 if they had tried and lost in decisive fashion.

This series could be broken down even more but I won’t belabor the point. The Wild were anything but ready for this series and their opposition knew what it would take and performed accordingly.

I keep reminding myself about the “process,” but it’s not making me feel any better. It takes time and this club will have tremendous salary cap challenges beginning right now.

If Guerin can build a Cup victor, he will have to do it with $12.6 mil less cap space due to last summer’s buyouts. It definitely is a process and for the WILD it is in its infancy.