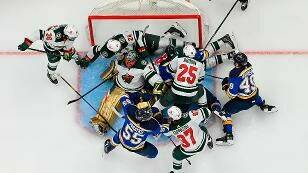 Goal crease scrum between the WILD and Blues in Game 4. Photo: nhl.com.

HAWK RIDGE – It requires a high level of cardio function to play hockey. It takes a high level of ability to absorb stress to coach hockey. And to withstand the rigors of being a fan during the biggest hockey tournament of all?

You must have a good energy level and an ability to deal with the stress of the ups and downs of the game. And it doesn’t hurt whatsoever to be a little bit crazy.

People who know me say that I have all three of those covered. Energy, stress and nuts. I’m good.

The Minnesota WILD and the STL Blues now have four games in the books and their series is tied at two games apiece.

STL won G1 going away in a 4-0 whitewash of the WILD. The WILD came back to take Games two and three with 5-1 and 6-2 victories.

The Blues had the better of it today in a Mother’s Day matinee that saw them gain a 5-2 win to even the series as it returns to St. Paul for G5.

By earning the split in STL the WILD regained Home Ice advantage, with the series now boiling down to a best of three matchup.

By the time you see this column games 5 and 6 will have been played and the series could be decided. Or it could be headed for an epic Saturday night G7 in St. Paul.

That would be nerve-wracking to say the least. That is the world of high-level sports though.

Today the Blues had the drop on the WILD from the start. Even though the first period ended at a goal each, the Blues appeared to be ready to play and the WILD didn’t.

Before the series began, I advised that the WILD wanted to make sure this did not turn into a special teams series. In G1 they took 28 minutes in penalties to the Blue’s 20 and gave up two PP goals. In G2 they still took more penalties (16 minutes to 12) but scored two PP goals to the Blue’s one and looked better from a team defense perspective. Much better in fact.

In G3 in STL the club came out fast and hard and scored twice within the first 2:18 of the game and set the pace from there. The first four goals were even-strength tallies and the fifth was an ENG.

The WILD incurred a minuscule 4 minutes in penalties and the Blues had 8. Special teams weren’t a factor in this tilt. G4 tonight wasn’t a special teams game really. PIMs were at a minimum (10 mins each) and this was a 3-2 game in reality.

The Blue’s 4th goal was an ENG and they got a PP goal with a minute to play when the game had been decided. What can I take away from this loss?

Three of the Blue’s top six D-men were inactive today due to injuries of varying degrees. In addition they suited up 7 D and 11 forwards.

In a simple exam of the roster makeups prior to the game, the WILD should have established the pace of play to their will in the first but didn’t. They also allowed the Blues to score first and in a high percentage of NHL games that is a victory indicator. In G1 the Blues took the WILD fans out of the game early and never let them back in.

As soon as the Blues made it 4-0 right beyond the midway point of the third period, many WILD fans decided it was time to hit the exits. In G2 the WILD scored first and led after one. The fans were raucous the entire game.

In G3 in STL the team scored early and silenced the stunned Blues crowd. They never got into the game after that. The Blues tallied first today and the fans never let up.

In the middle of the second, a one-minute span with two STL scores doomed the WILD hopes for victory.

The WILD put on a couple of instances of sustained offensive pressure in the 2nd and 3rd but to no avail.

Another item of note is that STL came back with netminder Jordan Binnington to replace Ville Husso today. Binnington had been 0-9 in his previous nine playoff starts before today’s win.

The WILD will likely see him on Tuesday in St. Paul.

The WILD had lethargic performances in G1 and G4. They dropped both games. When they played with energy and purpose the Blues had no answers for them in G2 and G3.

They can still win this series and will need to come out on fire in each game to ensure that. This team is better than they realize.

IN THE REMAINING SERIES AROUND THE LEAGUE;

WAS vs. FLA, the Caps lead this series two games to one. They went into the Panther’s house in G1 and grabbed a 4-2 win. They lost G2 5-1 before winning a decisive G3 in DC by a 6-1 final. The Cats team defense looks pretty suspect all of a sudden.

BOS vs. CAR, the Canes made it look like it would be a short series in two dominating wins at home. The B’s had other ideas and just took G3 & G4 in BOS. This one is going back to Raleigh at two games each.

PIT vs. NYR, the NYR were surprised in G1 with a 3OT loss to the Pens then came back for a decisive 5-2 G2 win. The Pens took a G3 win in Pitt. If the NYR fall in G4 tomorrow eve, this series won’t end in their favor.

TBL vs. TOR, The first four tilts in this series have been home ice splits. And whichever club won any of the games did so in emphatic fashion. This evening the Bolts spanked the Leafs 7-3 in an old-fashioned butt whuppin’. It was the teachers against the pupils here. Perhaps the Champs aren’t done yet.

NSH vs. COL, this series stands at 3-0. While the Preds have put on some push at times, they are getting steamrolled. The Avs have outscored them 16-5 so far. Look for a sweep here.

DAL vs. CAL, this was my upset pick of the opening round. So far it’s holding serve with the Stars earning a 2-1 series lead with G4 in the Big D.

If DAL wins tomorrow eve, this one could be over for the Flames soon after.

FOR THIS WEEK, FLA will have to turn it up defensively to win this series. Can they? If the NYR split at PIT can they turn it up and take over the series? Tough call. If CAR goes home and wins G5 can they finish it? Can the Leafs finally escape their first-round woes?

The Avs will advance; can DAL eliminate the Flames, and will the OIL disappoint themselves once again? We are about to find out! PEACE