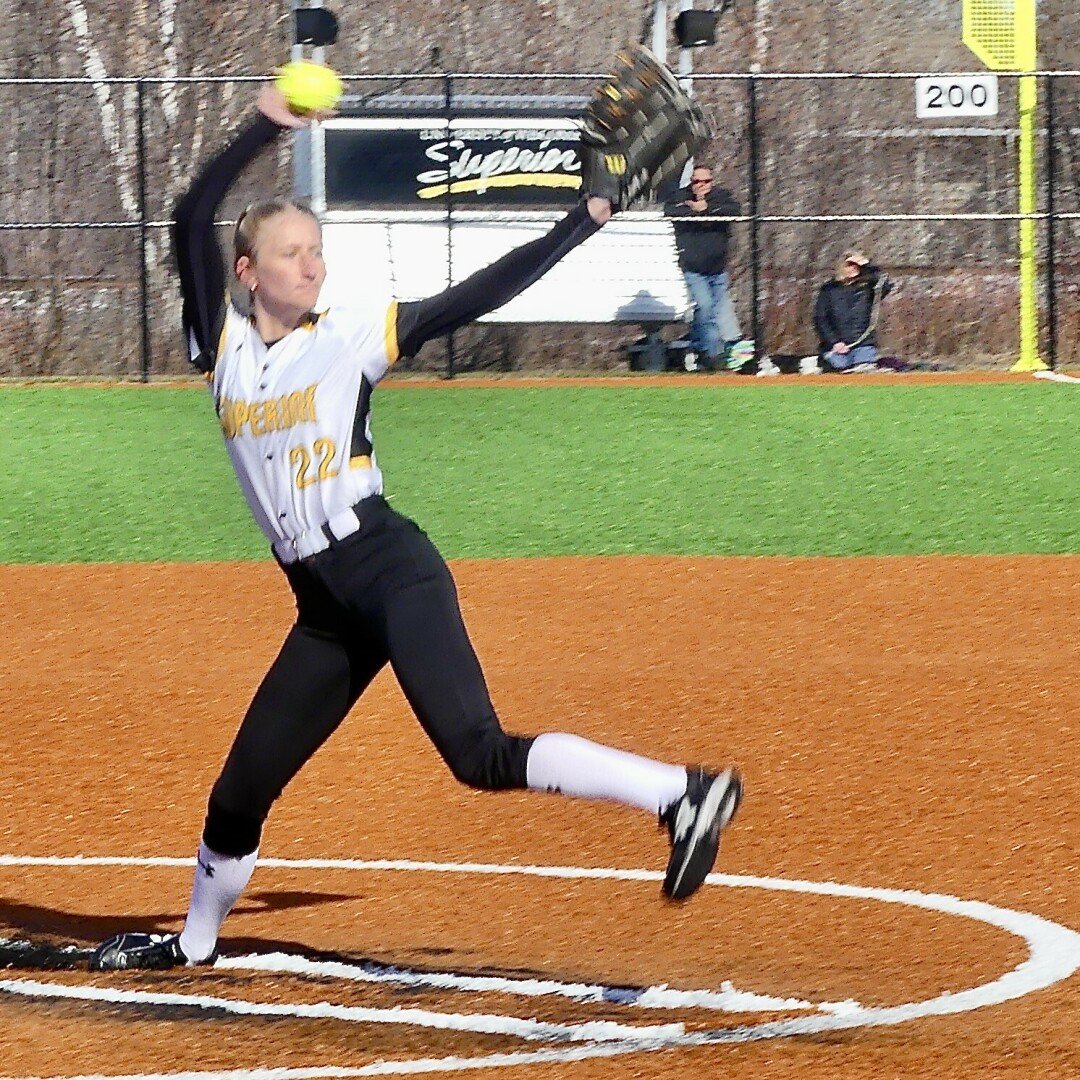 Sophomore Tayler Kraemer, UMAC pitcher of the year, fired a pitch in 9-1 semifinal victory for UWS. Photos by John Gilbert.

What a week we’ve had in sports to vault into May!

We had spectacular events occur near and far, with events that ranged from the most stunning Kentucky Derby I’ve ever seen, down through the Minnesota Wild’s Stanley Cup Playoff charge, and on down to Northland performances in baseball and softball at the college and high school levels.

We’ve even found a bit of positive irony and possibly even some closure in the case of Mike Randolph, who was hired as the new head hockey coach at St. Thomas Academy. Randolph absorbed the Duluth East school district’s jolting refusal to renew his contract after he had spent 32 years establishing and maintaining the Greyhounds as perhaps the state’s most successful elite program.

So stunned by the decision was Randolph that he went home from the brief meeting conducted by new district superintendent John Magas and resigned. Magas later used the resignation as justification for not disclosing the findings of a five-month “investigation” of complaints about Randolph’s coaching that were generated by the parents of three players who quit the team in midway through the 2020-21 season for a lack of prominent ice time.

In doing so, Magas and the school board violated the carefully constructed list of protocol that must be followed by any disgruntled athletes and decided to terminate Randolph.

With universal respect among coaches around the state, Randolph accepted the chance to become associate head coach at St. Thomas Academy with Trent Eigner. Randolph assisted the varsity and coached the junior varsity to a successful season.

When the private school in Inver Grove Heights made the decision to replace Eigner after this past season, Randolph applied, along with a number of other highly regarded candidates, and last week St. Thomas Academy selected Randolph.

Randolph has named as his assistant Tom Klein, former Wayzata and Minnetonka head coach who has most recently been an assistant at Benilde. He said he plans to move to the Twin Cities area but maintain his home in Lakeside.

“We’re not going to sell our house,” Randolph said. “My wife, Ginny, has a number of things she’s doing in Duluth, and I love Duluth too much to leave it completely. We’ll get a place down there, and I can commute when we’re not playing.”

Randolph plans to start conducting summer hockey programs for the more than 100 youth hockey players planning to attend St. Thomas Academy, similar to what he did for his tenure at East.
“I’ll run camps for Bantam and Junior Gold players on Tuesday, Wednesday and Thursday through the summer, up until tryouts start, and I’ll also be running a camp for the high school players when it’s allowed in August.”

Some news reports tracing Randolph’s new coaching job indicated he resigned “amid an investigation.” The administration’s investigation amounted to asking numerous players – including those who quit the team – about their treatment by Randolph, and Magas said data privacy laws prevented disclosing the results of the investigation.

Randolph got a laugh out of that, because he said, “I’ve never seen the results of the investigation, and I’d like to see it, just to know what they found, and there was no evidence of any problems. Does ‘data privacy’ mean that even the person being investigated can’t see the results?”

Randolph is clearly looking ahead. “I can’t remember every being so excited to get going,” he said. “But I’m not going to revisit what happened in the past. I’m just looking forward to coaching a great program.” 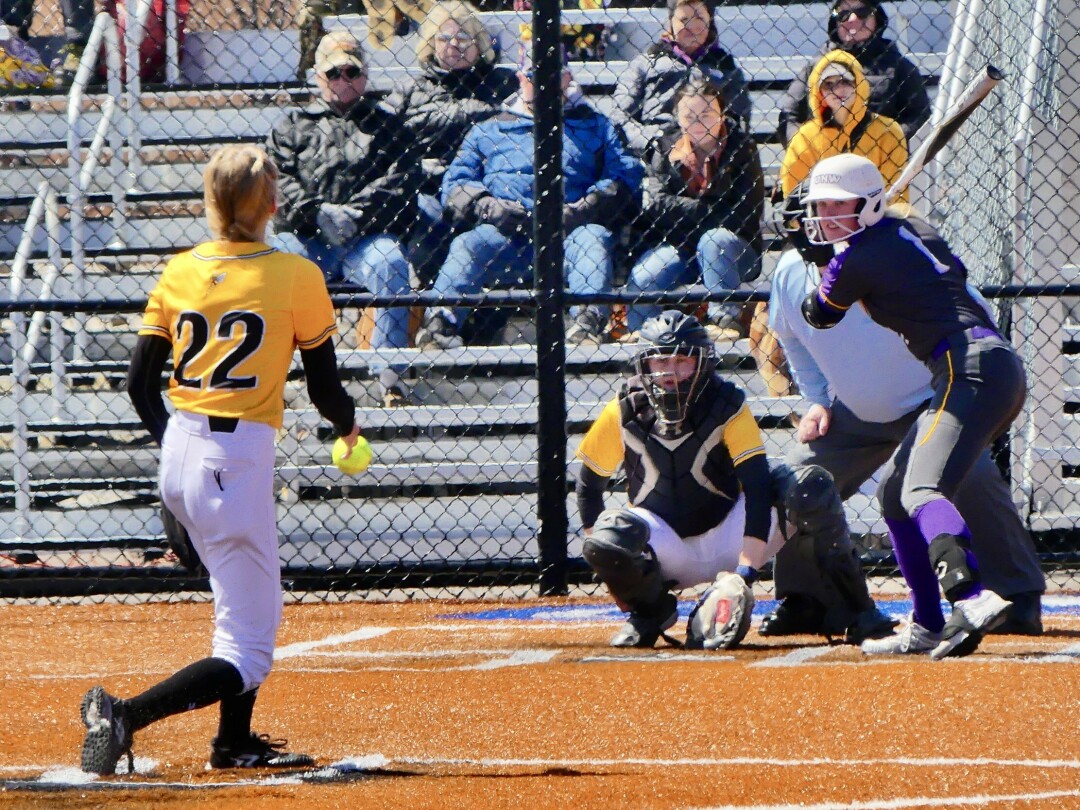 I’m not a horse-racing zealot, although I do tune in to the Kentucky Derby and, if possible, the Preakness and the Belmont. This year’s Kentucky Derby demands some scrutiny, because 24 hours before the race, a backup horse named Rich Strike was not entered. But when Ethereal Road was scratched last Friday, Rich Strike’s owners got their colt entered to join the 20-horse field.

That, alone, was a long-shot for a horse that had been bought for $30,000 from a low-level claiming race last fall.

Jockey Sonny Leon, who has raised a family while content to race at small regional tracks in the Ohio area, rode Rich Strike to some success, and before getting his first ride in the Derby, he had lost close races to both Derby favorite Epicenter at the Louisiana Derby in March, and to No. 2 pick, Minnesota-owned Zandon, in the Blue Grass Stakes last month.

In the Derby, while a notoriously fast pace-setter took off in the lead, Epicenter, a 4-1 betting favorite, and Zandon, 6-1, engaged in a predictable duel up near the front.

Meanwhile, Leon was doing what he does best on his familiar small tracks and maneuvering for openings like a road-race driver.

Starting on the outside, Leon brought Rich Strike, an 80-1 long shot, toward the inside, finally getting to the rail.

As the starting leader fell back after setting a too-fast pace, ultimately finishing last, the Epicenter-Zandon battle was captivating as the horses rounded the final turn for the homestretch.

Rich Strike moved up until he encountered a slowing horse, then Leon guided his mount to the outside, then farther outside to pass the faltering Messier, then back to the inside around that middle-of-the-pack cluster.

Ahead were Epicenter and Zandon, but the unknown Rich Strike approached the tiring leaders with amazing speed, and zipped right past them to win by almost a full length.

Back in 1913, a horse named Donerail was the longest long-shot to ever win the Kentucky Derby.
And now, 109 years later, an unknown horse named Rich Strike became the second-longest long shot at 80-1, meaning anyone who bet on him won $163.60 for every dollar wagered.

Race after race, you see a challenger balked by a slower horse ahead, but never before have I seen a jockey maneuver outside to inside then back outside and into whatever hole would prevent him from running to daylight.

We can bet, to coin a phrase, Rich Strike will have odds different from 80-to-1 for the Preakness in two weeks.

When Wisconsin-Superior played host to the UMAC Division 3 softball tournament last weekend at the NBC field complex, the favored Yellowjackets lost their opener 2-0 to Minnesota Morris.
Sophomore pitcher Tayler Kraemer of Spring Green, Wis., was exceptional except for a wild pitch, which allowed a runner to score and break the 0-0- tie.

Morris, which had been given up 37 runs in three losses to UWS during the season, scored its second run on a double-steal – perhaps the most exciting play in baseball or softball – with Sierra Stevens stealing home.

The loss by No. 1 seed UWS followed an opening 2-1 loss by No. 2 seed Northwestern of Roseville to No. 3 Bethany Lutheran.

Kraemer came back to pitch the Yellowjackets to a 3-1 loser’s bracket victory against Northwestern in the doubles-elimination tournament, and the Yellowjackets gained revenge by thumping Morris 9-1 to eliminate the Cougars and gain the final.

There they found Bethany Lutheran waiting, undefeated. It was a grueling weekend, but Tayler Kraemer again pitched brilliantly, yielding only one run and three hits, but that run in the third stood up as Kayla Senne shut out the Yellowjackets 1-0 on a 4-hitter.

Tayler and Kaela bat 1-2 in the UWS lineup, and they’ll be back for more next season.