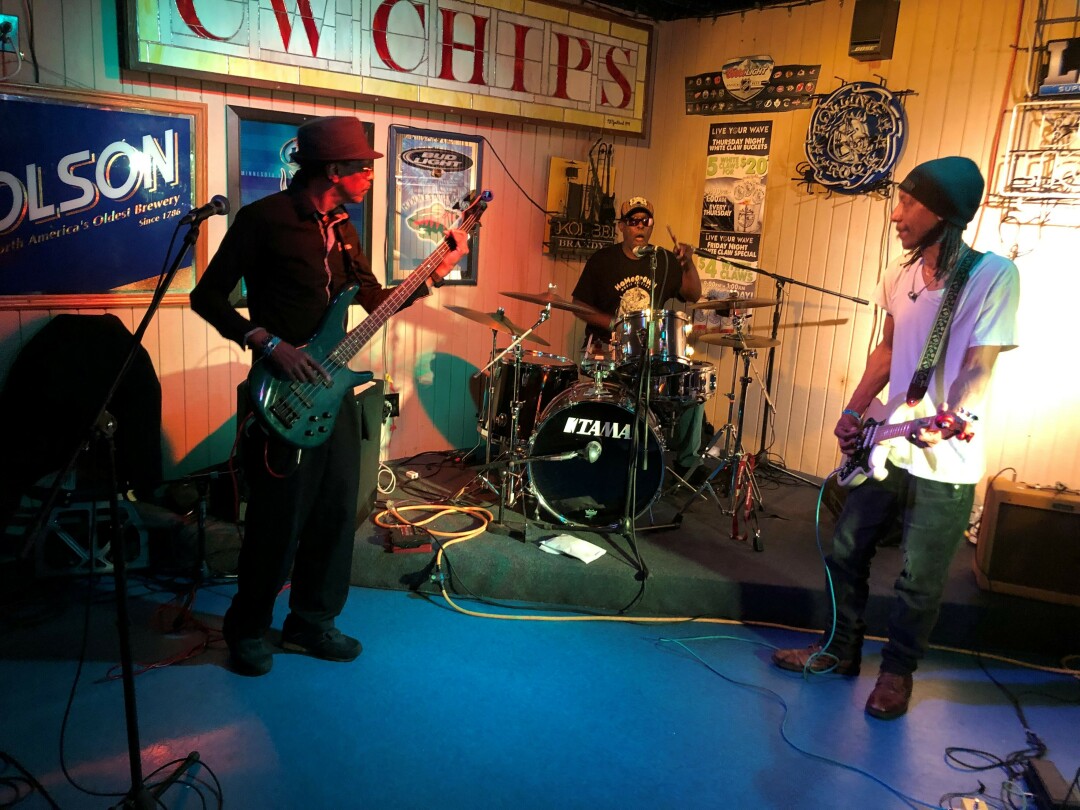 Boku Frequency performing at the Reef in Duluth was my favorite Homegrown performance. Photos by Jill Fisher unless otherwise noted.

Now that Homegrown has come and gone, with tears shed at its ending by some, I can appreciate what an important community event this is.

Both performers and audiences were grateful to be back to live performances after the two-year COVID hiatus, attested by the capacity crowds for nearly every act and venue.

Since this was my first Homegrown experience (having been away from Duluth for 20 years) I don’t have the perspective of those who were here to see it grow from the modest birthday celebration for Scott Lunt at Lafayette Community Center to the extravaganza it is today.

With 195 individual acts at 40 different venues, I obviously couldn’t do it all. As it was, I managed to see all or at least part of 37 musical performances over the eight-day run. An outstanding deal for a $30 wristband!

One of the first things I noticed was the “musical chairs” numerous musicians played, among them Clancy Ward, Misisipi Mike, Eric Bong, Amy Ugstad, Teague Alexy, Jacob Mahon, Suzi Ludwig and Jimi Cooper. What a demonstration of their musical versatility as well as their endurance.

Then there was the opportunity to experience a range of venues and how well they worked for different groups.

No one venue stood out as perfect – whether it be sound quality, creature comfort or sufficient space.

The DECC Harbor Side Ballroom was comfortable, but the sound wasn’t good for the dancers who were relegated to the left side of the stage. Views of Canal Park in the late afternoon light mitigated that drawback somewhat.

Clyde Iron was not a comfortable place for attendees who were drinking (thanks to two bars set up in the performance area) – there were no tables or ledges on which to set drinks down! However, having a kitchen serving food until 10 was appreciated for those of us racing from one performance to another without timeouts for meals.

Bars, which host musical acts on a regular basis, were generally great soundwise for loud bands but it was hard to hear quieter solo artists due to crowd noise (incessant talking).

Darin Bergsven’s fine performance at Vikre Distillery was hampered by this situation.
By contrast, Big Wave Dave and the Ripples late night performance at the Kom-on-Inn worked well despite squeezing into this small space.

Carmody’s was actually one of the best venues in terms of sound, handling both loud and quiet acts well due to its narrow layout that kept the bar crowd separated from the performance area.

Fitger’s Spirit of the North Theater provided comfortable seating and good sound, but no place to dance to the rockin’ performances I witnessed there.

The range of genres was impressive, if not comprehensive. Rock and roll, rhythm and blues, heavy metal, futuristic electronica, hip hop and Las Vegas-type shows were balanced by quirky solo acts and family friendly old-timey presentations.

Then there was Saturday’s late night Burlesque review at R.T. Quinlan’s, contrasted by the Holy Hootenanners at Canal Park Brewing on Sunday afternoon. The overall effect was to push me beyond my established sensibilities and surprise me by my enjoyment of previously eschewed styles – hip hop being in that category.

In addition to that mind-expanding effect was the opportunity to hear lots of original music. An example of that being Shane Nelson’s performance on the DTA Trolley.

Father Hennepin, which played at Duluth Cider to a packed crowd early in the week, offered a pleasing continuity to the overall event and reflected the feelings of the crowd with its rendition of “I Like It In Duluth.”

Four Mile Portage, with attendant clogging, at Empire Coffee in Superior, kept country roots in the mix.
Out of all the acts I attended my favorite had to be Boku Frequency, at its late-night gig at the Reef. It was rock solid danceable funk and refreshing to see an all-Black band amongst the event’s predominantly white performers.

Other highlights of Homegrown for me included the offerings of Born Too Late, with incredibly polished deliveries by 15-year-old Rokkyn Nelson-Kavajecz at Sir Benedict’s Tavern on the Lake. This young band will be one to watch as it evolves.

At times it was an individual’s performance that blew me away – Izzy Cruz, playing the congas with Al Church, was amazing in her cover of “Funky Town.”

Others worthy of my regard were Sugar on the Roof and Actual Wolf. Although I chose to attend mostly those gigs with musicians unknown to me, I couldn’t pass up hearing a couple of my favorite bands such as Hannah Rey (with her band), New Salty Dog and Big Wave Dave and the Ripples.

One of the most surprising pleasures for me was the ear-piercing performance by Fenestra Funk at Carmody’s, with its soaring saxophone. Likewise, The Crunchy Bunch, the hip-hop DJ collective, which played at the Main Club in Superior, was a welcome addition to music I can actually enjoy given their directive to “Shut up and dance.”

Even those acts I did not particularly enjoy had many devoted followers who thought they were wonderful.

Beyond the great music, folks dressing up in outrageous attire was very fun. From the Western outfits on display during Westside Wednesday to futuristic looks by both attendees and performers, Sunday’s pajama party and everything in between, the feeling evoked for me was the glory hippy days of the 1960s.

So, my takeaway is that Homegrown has become one great big party, especially for the 20s set – the upside of which is the celebration and enjoyment of live music, friends gathering, community building and all the fun people watching.

The one downside was too much talking during the performances precluding focused listening in many of the venues.

Further, it is surprising that this level of audience attendance hadn’t shown itself earlier at other regular gigs around town. Only a handful of folks were on hand to enjoy the stylings of Danny Frank with friends Misisipi Mike and Colleen (Boss Mama) Myhre at Carmody’s on April 28.

Where were all those music aficionados the rest of the year?

If the mission of Homegrown in 2022 was to introduce new acts, new music and new venues to the potential audiences of the Northland, then judging by just me it was wildly successful. Here’s looking forward to next year’s Homegrown party!

Meanwhile, a decidedly older and more sedate audience settled in for a fine concert by Monroe Crossing at the West Theatre on Thursday evening. It was a mistake to expect a small turnout for this show due to all the other musical options available during Homegrown; indeed, the house was nearly full, though not as jam-packed as all the Homegrown venues. This just goes to show there are all sorts of Northland audiences to be entertained in spaces large and small. 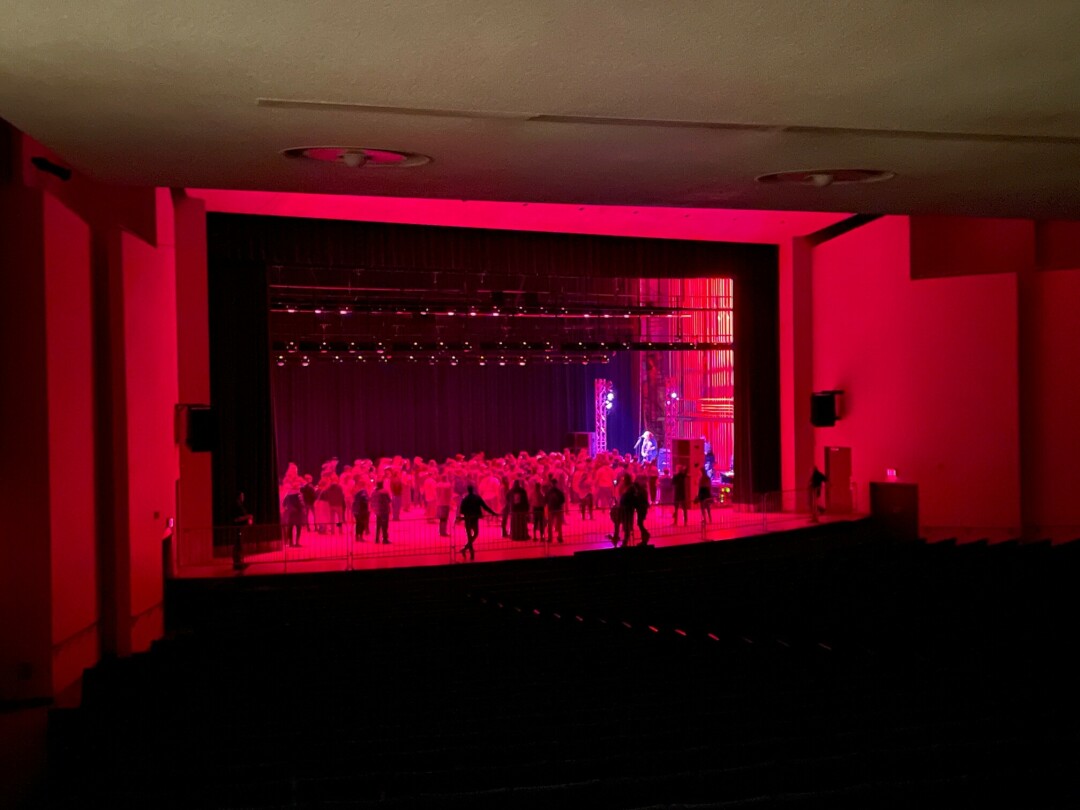 For the Homegrown show at the DECC Symphony Hall, the audience stood onstage (above) and watched the band off to the side, with the backstage as background (below). (Photos by Robert Boone) 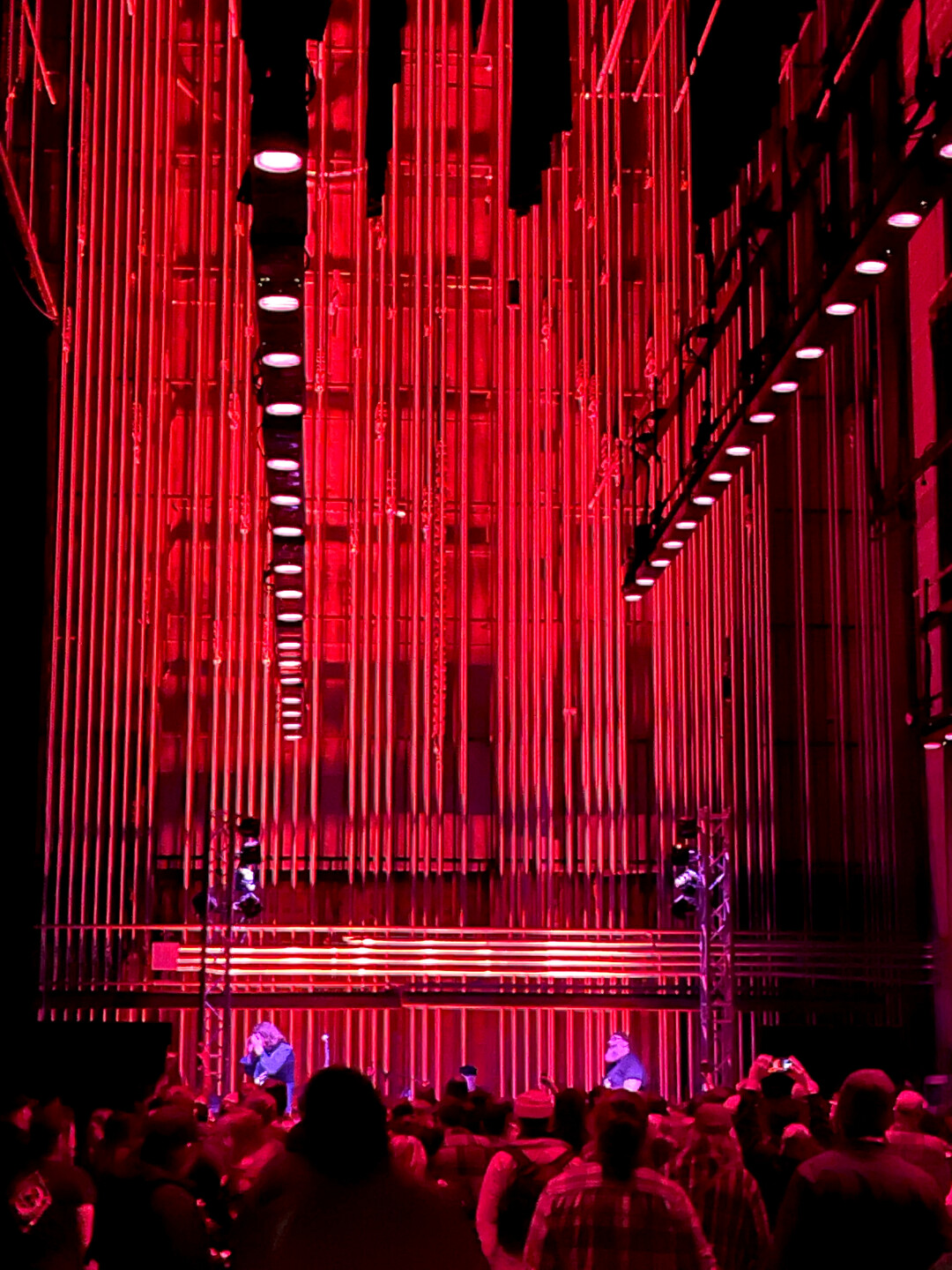 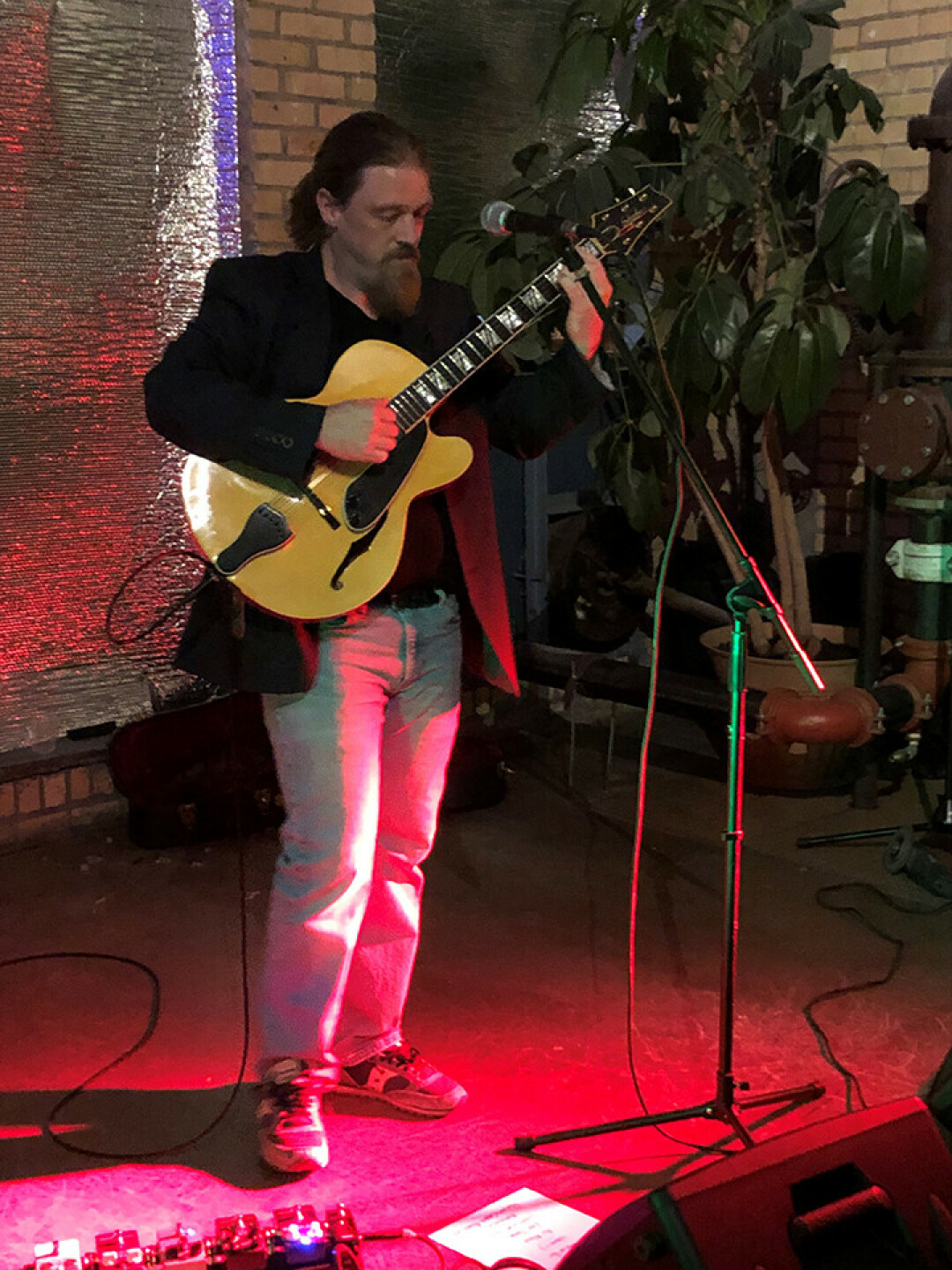 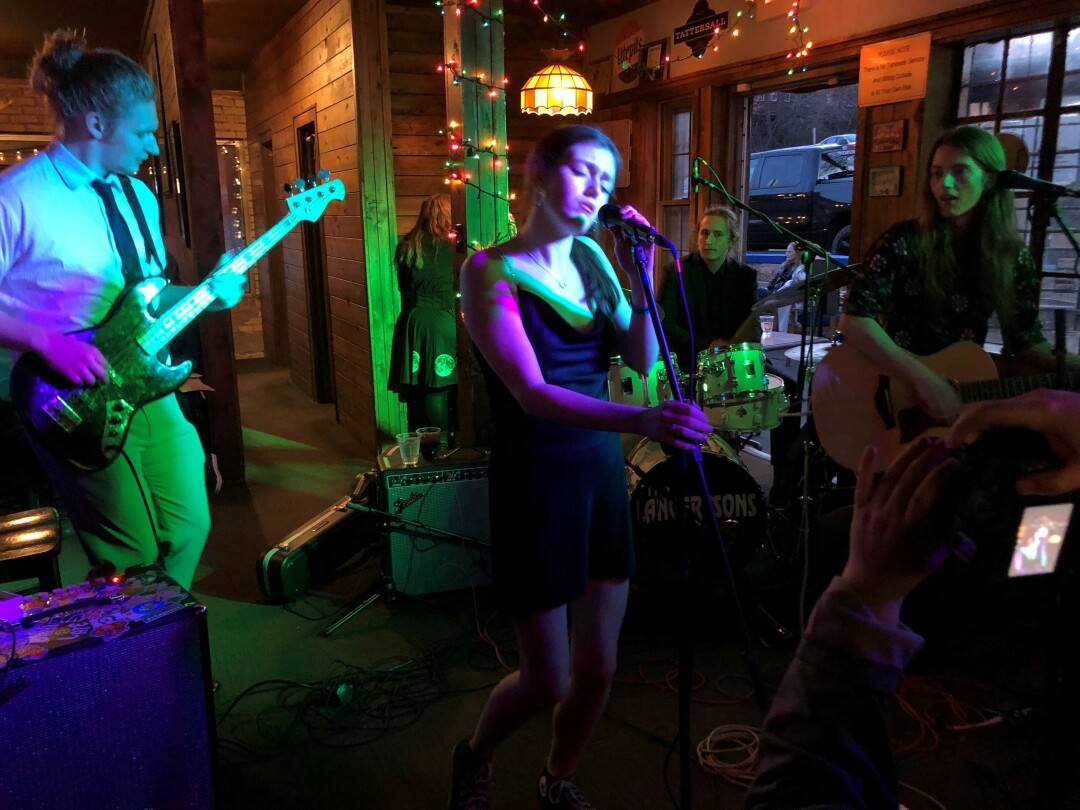 Born Too Late at Sir Benedict's. 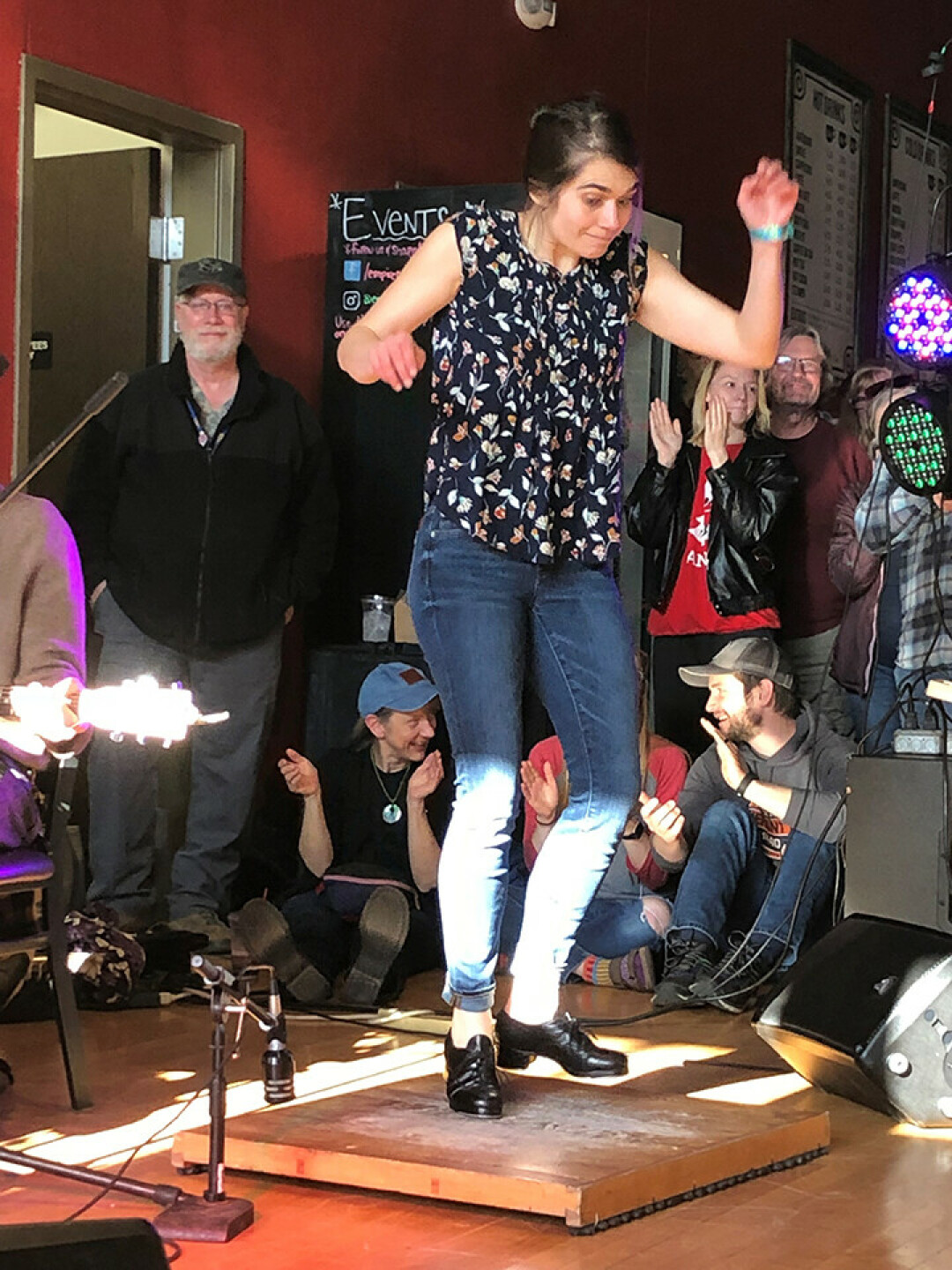 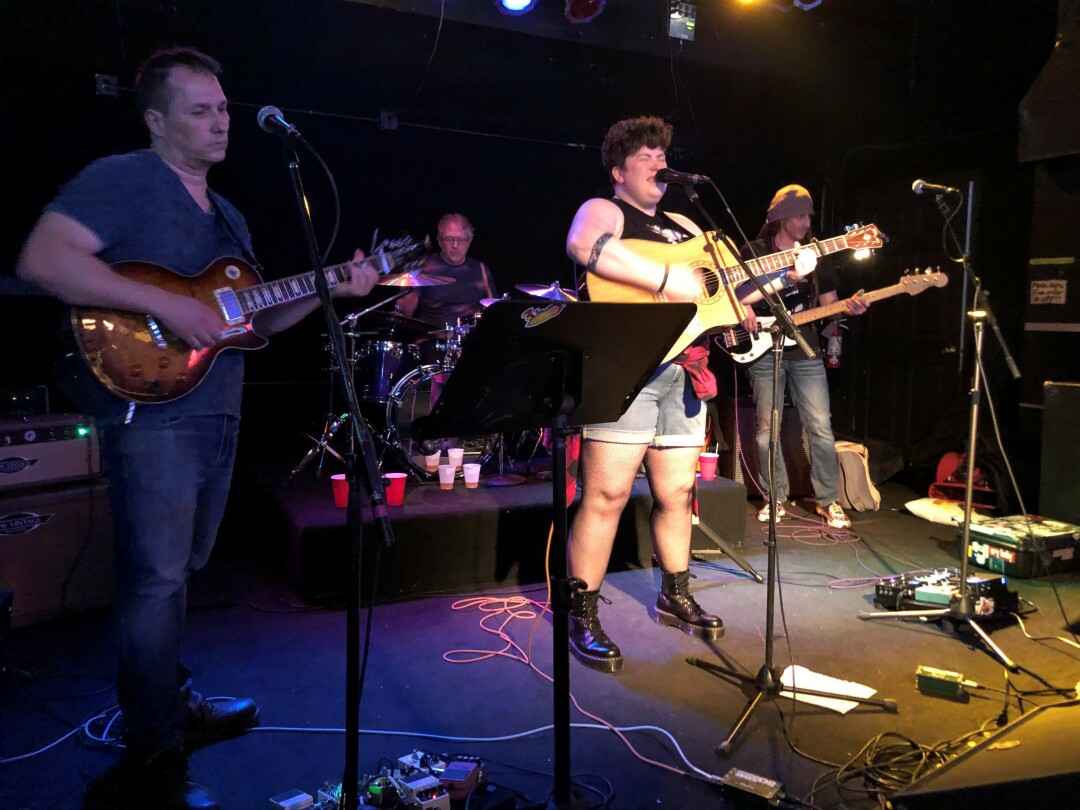 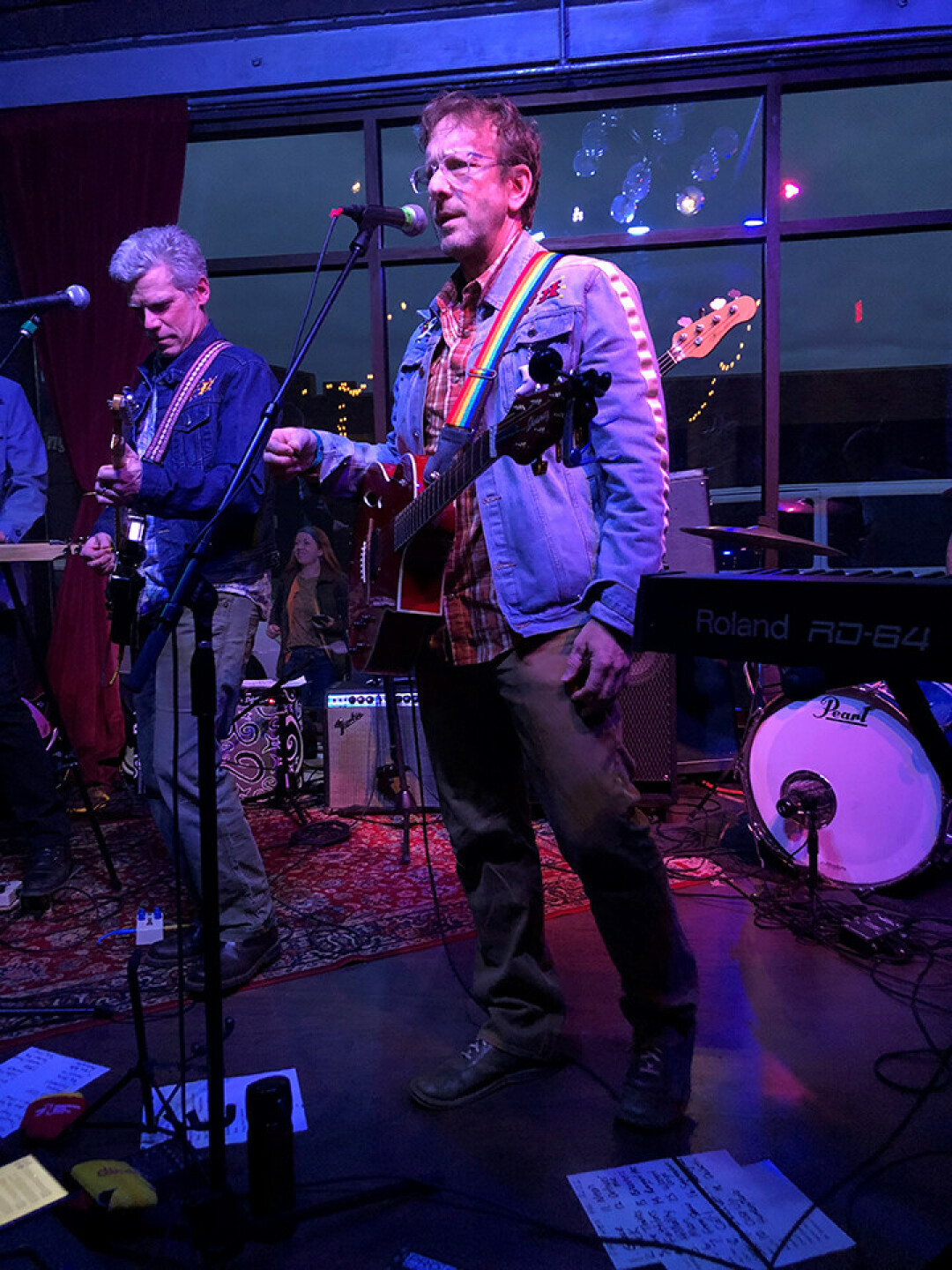 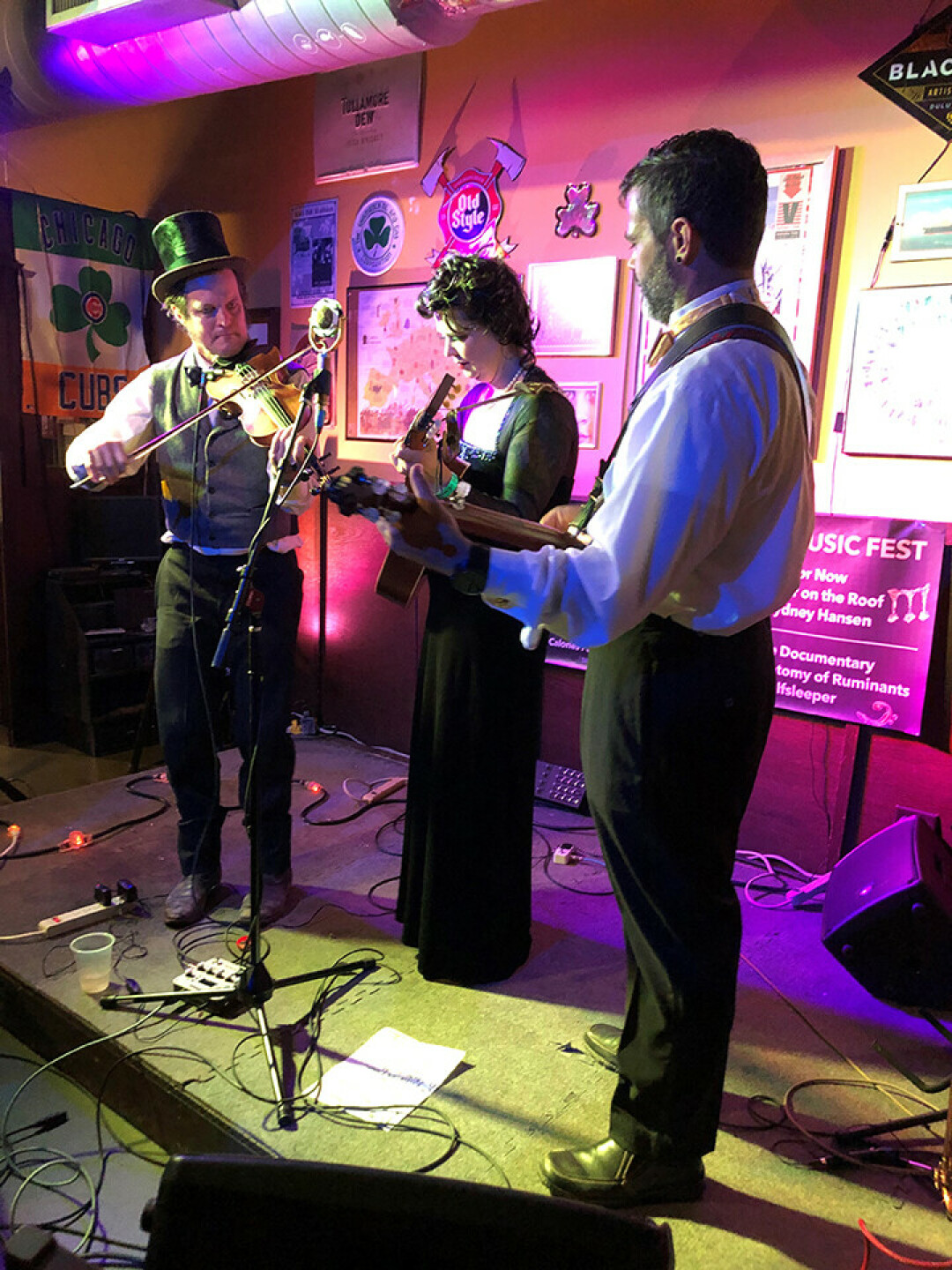 Sugar on the Roof at Carmody’s. 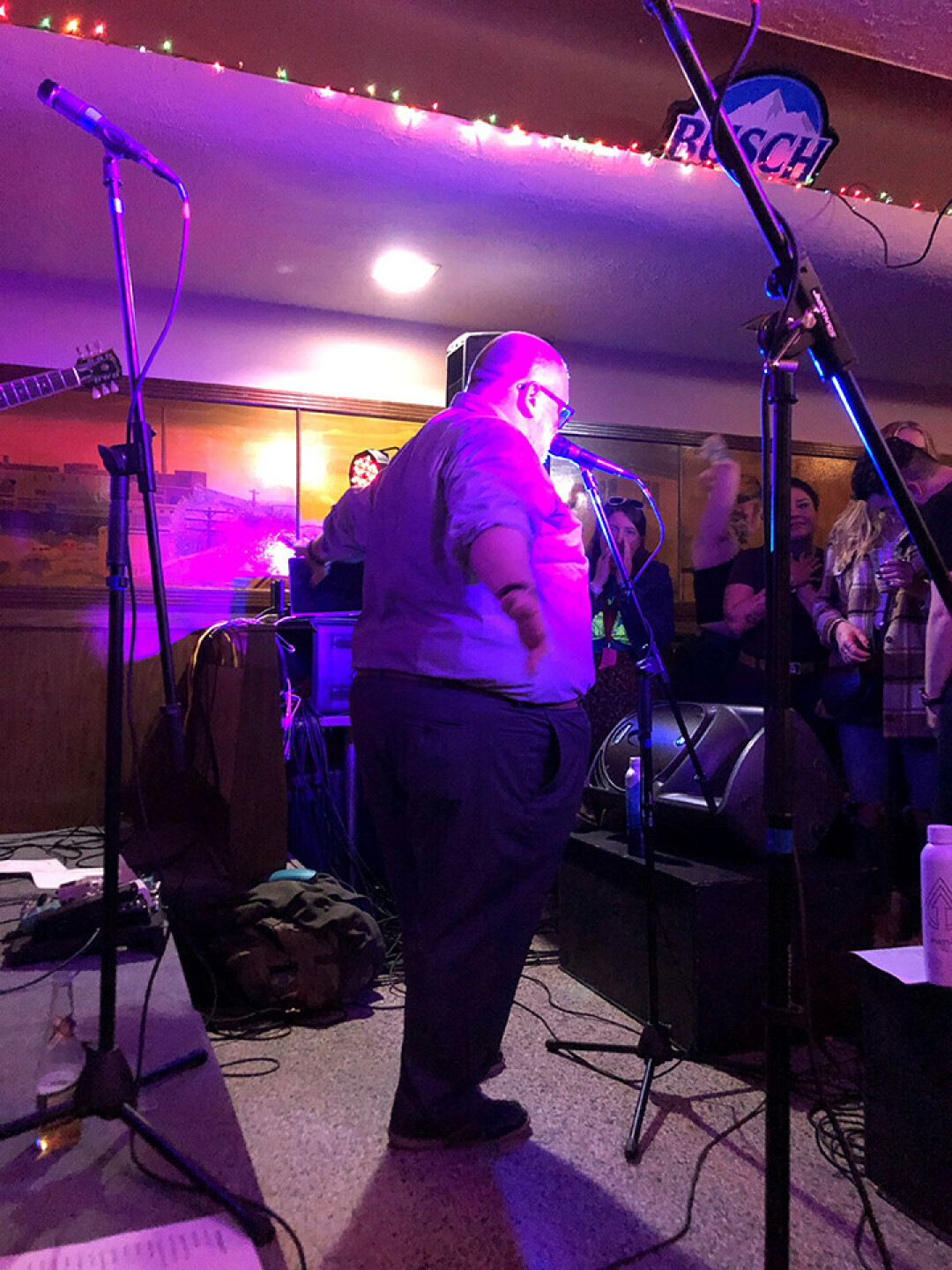