A World Accordion Day conversation with Florian and Patty Chmielewski 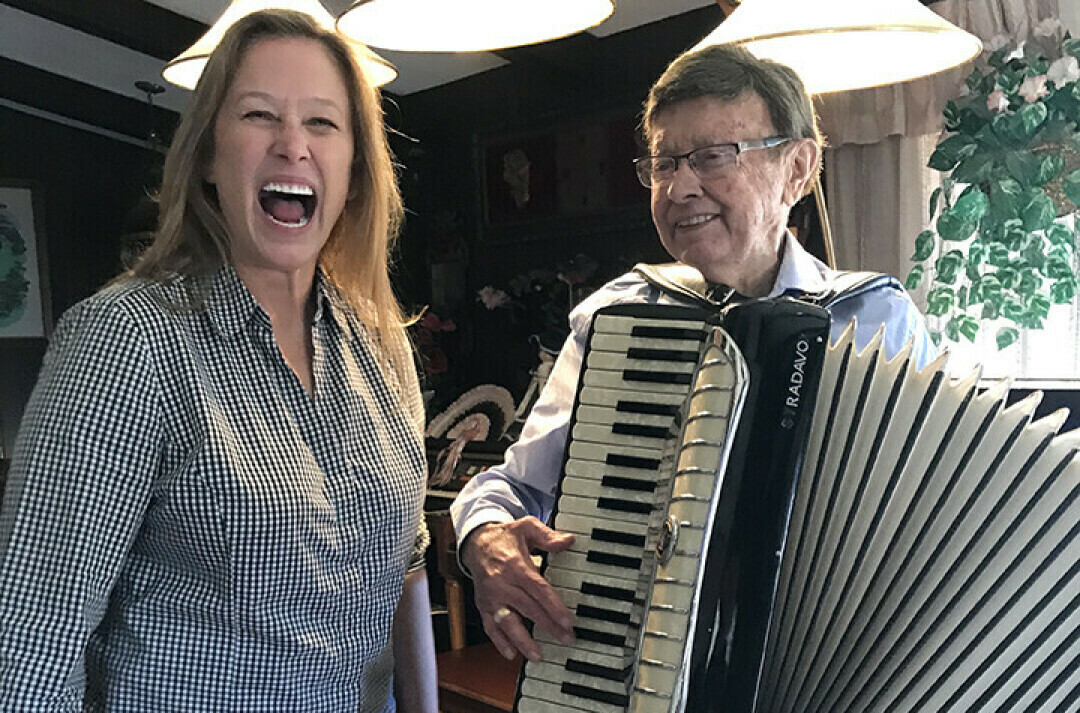 As the Chimielewskis will tell you, there are no sad polka songs, and they consider themselves missionaries of happiness. “It’s always our goal to make people smile, or if they say, they’re not very happy, well, our goal is we’re going to make them happy,”said Patty Chmielewski, who carries on the family musical tradition. “You know, you just really work harder. It’s just a natural innate thing that we that we do. So he and I are very, very similar in our personalities.”

May 6, 1829, is a significant day in world music history, for it was on that day the “sin squeezer” – also known as the accordion – was patented, which is why the Confédération Internationale des Accordéonistes (the CIA) has designated May 6 as World Accordion Day.

In honor of the 193rd birthday of the accordion, it seemed fitting to have a chat with someone who has been strapping on an accordion for 77 of his 95 years – Minnesota music legend Florian Chmielewski, also known as the Swinging Senator for 26 productive years in the Minnesota Senate.

The meeting at Florian’s lifelong home of Sturgeon Lake was arranged by his daughter, Patty, who enthusiastically carries on the Chmielewski family musical tradition.

Not having met many 95-year-olds, I didn’t know what to expect, but was happy to find Florian looking great – bright-eyed, chipper, full of stories and ready to tell them.

Patty, who has been playing music alongside her father all her life, was there to rein in the stories and help connect the dots, for not only was she there for much of it, but she helped tell her father’s story in the wonderful 2017 autobiography 0 to 90 Florian Chmielewski: From Farm Boy to Fly Boy, From Senator to King of Polka. In 90 Quick Years.

The three of us sat at his kitchen table, with window views of former farm fields that Florian and his family reclaimed by planting 50,000 pine trees, as well as a view of the large 95’x45’ garden plot Florian still maintains.

“I do my girlfriend’s garden in Cloquet, too,” Florian adds (Florian’s beloved wife, Pat, died in 2003, the day after their 47th wedding annniversary).

On the table he had assembled various degrees and honors that have been bestowed on him, both for his music and his 26 years as Minnesota’s “Swinging Senator.”

He begins the interview in a way that shows you his decades as an entertainer is ingrained in his personality: “You don’t have to call me doctor but I do have a doctorate degree.”

There’s something so natural and charming about this former farm boy who loves to entertain, who comes from a line of hard-working farmer-politician-musicians, and who has seen the family musical tradition pass on not only to his children, but to his grandchildren and great-grandchildren as well.

It’s an impressive legacy, and Florian is rightly proud of his accomplishments in music and in the political arena. The plaques and awards and hall of fame inductions attest to his very public life, which began in 1945 when the 18-year-old accidentally acquired an accordion from his older brother, who was living in Minneapolis. The brother had an accordion and a landlord who hated its “noise.” 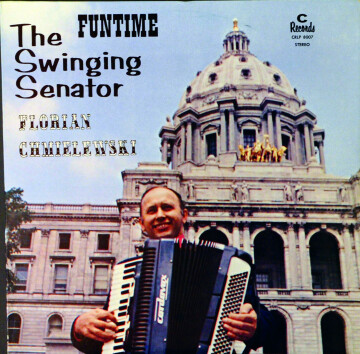 The rest is history. A neighbor heard the teenager practicing on his newly acquired accordion and asked Florian to play at his wedding. Florian protested that he only knew four songs, but the neighbor didn’t care. Repeat them, he said. He and a drummer practiced the four songs.

“We played them over and over all night,” Florian said.

There is, of course, a punchline to the story of the first gig. Three of the songs were appropriate for the wedding – a Swedish song filled in for the wedding march and he had a Polish tune for the couple, who were Polish.

He gets through the first three songs and pauses.

“I only had one more to go, but the song was not appropriate for a wedding,” Florian said. “I thought to myself, now what do I do? I was really puzzled. I have to start playing. I raised my eyes to have and I said,

So he launched into the “Too Fat Polka,” with the memorable lines, “Oh, I don’t want her, you can have her, she’s too fat for me.”

How did that go over?

“And so that was it,” Patty adds. “When he got a $2 tip for doing that particular gig, the star was born. Just like that.”

As one of 15 children, Florian decided to form a band by recruiting four of his brothers – Jerry, Donny, Chester and Leonard – and teaching them how to play their instruments. This is DIY before punk garage bands.

Now, in addition to being a farmer like his father, Florian was a third-generation working musician like his fiddle-playing father and his grandfather back in Poland. The Chmielewski Brothers were unstoppable, playing dances and events. Radio appearances led to television in 1995, and eventually the syndicated Chimielewski Funtime Band TV show.

“The television exposure was a happy, wonderful thing,” Patty said. “Really, I don’t care where we went. If we were in Mexico or there were always travelers and visitors wherever we went who recognized us because of the television show.”

Patty recalls all of it so well because by that time, the brothers had been replaced in the band by Florian’s immediate family – his wife Pat and four children. Patty recalls how hectic things could get, especially when her dad was elected to the Senate in 1970.

Patty recalls how popular the family band was back in the 1970s.

“It was kind of crazy, because we were literally like The Beatles,” she said. “Oh my gosh, I mean, girls would jump in there and try to grab my brother’s shirt and rip off his pockets. My brother would say ‘I’m so tired of having my pockets ripped off.’ Mom was always sewing his pocket back on. I mean, it was crazy. And we won the Nielsen ratings. The best television show. We’d beat Archie Bunker and NFL football. I mean, it was the number one show. We grew up in everybody’s homes.”

While maintaining the band’s very public schedule, Florian had his alternate life as the Swinging Senator, a role he says never would have happened without his trusty instrument.

“I never, ever would be a Minnesota Senator if not from my accordion, and that’s the honest to God truth,” he said. “I went everywhere, to every precinct, playing accordion.”

He continues to play every day, and you can hear him do so the first and third Wednesday afternoon of each month at the Cloquet VFW, a gig he has played for more than 30 years.

And the family band, well, Patty has taken the reins of the band and legacy for the 21st century. Her brother Florian Jr. plays accordion

“I was the youngest and the only girl, and he just assumed that this is the boys’ responsibility, but I had been proving to him my whole life, you know, I can do this. It was just natural.”

Patty said her father and others thought she could have a career as a country singer.

“I even had somebody come up to me and offer me to pay my way to Nashville,” she said. “I didn’t want to be a country western singer. I wanted a family. I didn’t want to leave and be on the road like that, because I knew what being on the road was like. I really didn’t have a childhood. I mean, your bed was n the Suburban. You slept on top of the instruments, and you took turns driving.”

“He is doing everything the way his father would have wanted him to do, like his father was town board, and my dad became a county commissioner,” Patty said. “His dad had the farm. He took care of the farm, and then he took that over. I don’t know, there’s just this dedication, in a way, just like he had for his father, and then I have for him and I carry on his legacy and all the things that he does. I’m on the radio now. I’ve got my own radio show. I’ve got a TV show as well. We’re kind of parallel in our lives. It’s kind of an innate, ingrained thing, I’m sure.

“I was the only one really who was like, you know, wanted to be doing it well,” Patty said. “I wanted to do what he does, giving smiles and happiness to people. And you could see that through your whole life, what it did for people and brought families together, it was just so wonderful. I want to continue that.”

Find the band’s schedule here. You can also catch Chmielewski Funtime Revisited via antenna TV Saturdays at 11 am and Sundays at 8 am on Channel 2.1 (Over the air), Channel 198 (Charter/Spectrum) and Channel 105 (MediaCom). You can also hear Patty and husband Michael Bell weekly radio show Funtime Polka Party Saturdays from 9-11 amon KDAL 610 AM or 103.9 FM, as well as Tuesdays from 7-9pm on Bemidjii’s KPMI 1300 AM.