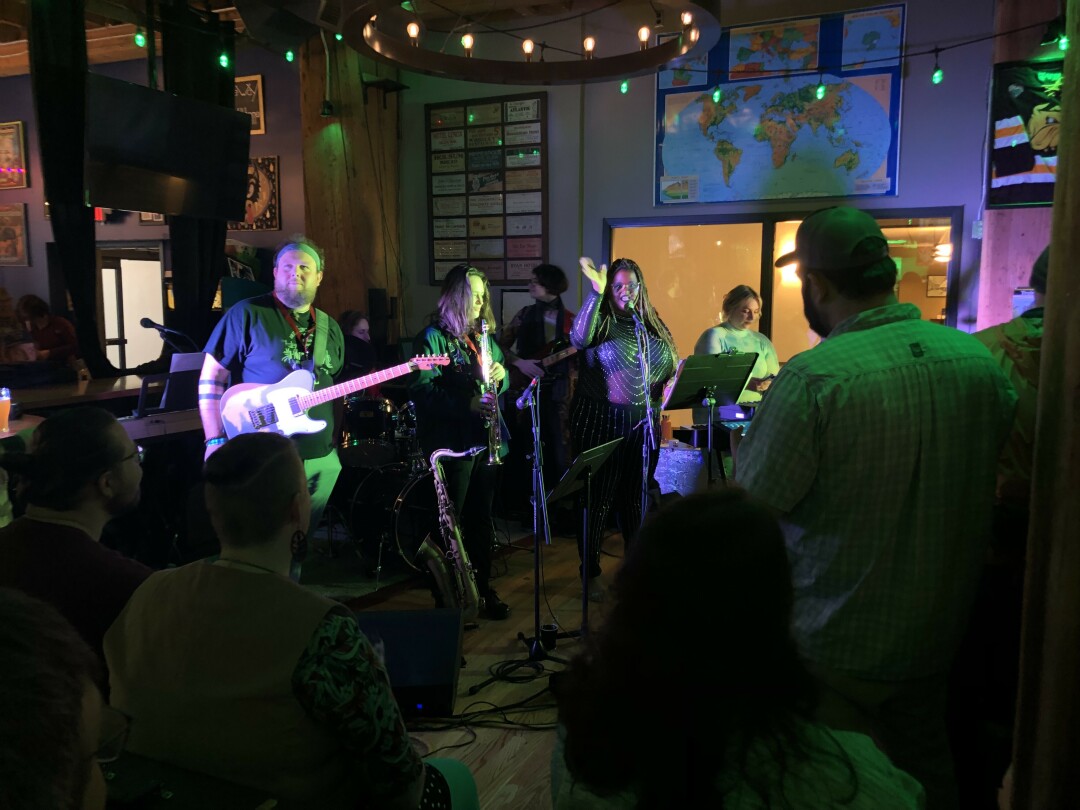 AfroGeode & the Gemstones kicked off the Homegrown Fest at Hoops on Sunday. Photo by Jill Fisher.

“Happy Homegrown!” That was the oft-repeated greeting from participating bands and attendees of the kick-off events on May Day 2022.

A capacity crowd – forget safe distancing – turned out to celebrate the return of live music after two years of virtual concerts due to COVID.

And what a kick-off it was with the six-member band AfroGeode & the Gemstones, launching into a mix of original songs and covers that displayed the band members’ versatile talents.

Lead singer AfroGeode gave a Billie Holiday inflection to an original tune while “Boxes and Squares,” a 2018 release by Tank and the Bangas, had the band moving into a talkin’ blues mode.

Further showing the eclectic range of their set list was the cover of Screamin’ Jay Hawkins’ 1956 song “I Put a Spell on You,” with a take of Nina Simone’s 1965 version.

Premiering an original song by the band, “Can We Find Our Way Back?” was another high test offering, as was Jamiroquai’s “Virtual Insanity” featuring jazzy saxophone licks. But it was the cover of Pink Floyd’s “The Great Gig in the Sky” that best showcased AfroGeode’s Janis Joplin-like passionate expressiveness.

Second up at Hoops was Stardust Collective, another rockin’ group presenting both original tunes and covers. Drummer Amy Ugstad got the groove going with a driving beat on “Set Yourself Free” the band’s first offering.

The original “Small But Powerful” was a tribute to a significant other by Aaron Tank. Then bassist Eric Bong vocalized another original number, “Hard Times” (a far cry from Stephen Foster’s tune by the same name).

Violin, keyboard and vocals were featured on “Show Me How to be Beautiful” by the exceptional Shawna Weaver. “One Step Closer” finished out their fine performance to an appreciative audience.

After a brief respite, it was on to Carmody’s Irish Pub for a lineup of singular if disparate acts.

First timer at Homegrown, Keith Dust attracted a young 20s crowd to hear his heavy psycho grunge rock offerings. Loud and raucous, it had the full-up joint jumpin’ in a way not seen in this venue for a while and the oldsters in attendance seemed to embrace and enjoy Dust’s energetic music.

When the Polkarobics, with their traditional polka tunes came on next, one might have expected the place to clear out. But no, the youngsters stuck around, danced and participated in their old timey and zany songs.

Suzi Ludwig, on accordion, and Jimi Cooper, with his banjo (both will appear as Dance Attic later on in the festival), as well as the rest of the band were clearly enlivened by this reception.

Rick McLean came on next, together with Mike McLean on drums and Pete Biasi on bass guitar. Together they made good on the promise of turning it “up to 11” with their take on good ol’ rock and roll. This was the point at which ear plugs were offered. For all that, it was an agreeable set that prepared one for the last act at this venue – Fenestra Funk.

As someone who never thought they could enjoy what some call “head banging” music, Fenestra Funk was a pleasant surprise.

With saxophonist Michael Schell’s announcement that they were “going to jam,” attendees were treated to a blitz of funky, rootsie and rockin’ instrumentals that segued nonstop from one number to the next. Loud, yes, but as soulful as they come.

Only one of the numbers included vocals, which set them apart from other performances.

Witnessing the ritualistic rhythmic head nodding was another amazing and amusing takeaway for this writer, who had been advised to be sure and check them out.

With so many acts to see, it is a real challenge for this newbie to decide which ones to see (after 20 years away from Duluth this is my first Homegrown experience). And with just one day and evening of music to judge by, I won’t want to miss anymore than absolutely necessary!