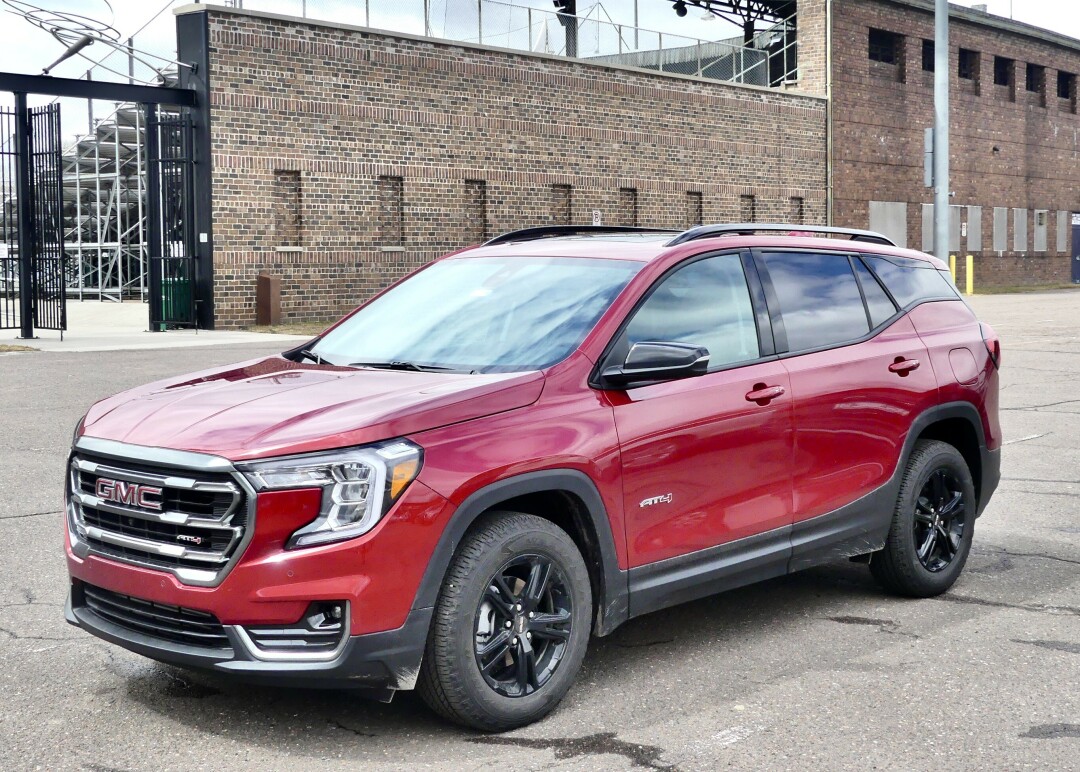 GMC Terrain is a roomy but compact SUV powered by a turbocharged 1.5-liter 4-cylinder. Photo by John Gilbert.

If you were playing word-association games, and somebody said: “GMC SUV,” you would probably say “Yukon,” or maybe even “Yukon Denali,” referring to the so-called industrial-strength version of the Chevrolet Tahoe or Suburban.

But in this age of downsizing and any-sizing of SUVs, don’t leave the GMC showroom without checking out the more moderately sized Terrain. GMC also makes the midsize Acadia, which I’ve always liked, but the new Terrain AT4 was delivered to me for a week’s test drive, and I must say I was at first taken aback, and then impressed with nearly every feature of the vehicle.

General Motors likes to add stuff onto GMC models to give them a little extra drawing power next to the popular Chevrolet trucks of all shapes and sizes, and the Terrain is basically a feature-loaded version of the Chevrolet Equinox, which I’ve always been attracted to as a more reasonable size SUV next to the huge Tahoe/Suburban beasts.

The Terrain appears to be plenty large from the outside, and roomy on the inside, but closer inspection will give indications that it is its own SUV, and not a downsized Yukon.

Performance is proper quick and its handling is agile. It comes with a 9-speed automatic transmission that seems to be ideally set up to provide adequate power to all four wheels. The “AT4” in its name indicates there might be some energetic off-road capabilities that could be challenged by the Terrain.

Also, the name “Terrain” indicates you might have changing terrain underneath you.

But one of two surprises I had in store were yet to be discovered. Because I’m an engine-interested character, I like to drive a vehicle, and if I’m impressed – or not impressed – I want to then check the fact sheet accompanying it to see where the engine came from and try to figure out its lineage.

First thing I noticed about the Terrain’s engine is how nice and compact it is. Turns out, it is a spunky 4-cylinder engine, with dual overhead camshafts and a turbocharger, which can breathe a little extra punch into an otherwise undersized or underpowered engine.

And yet, that was the first pleasant surprise – that the Terrain never felt underpowered, which goes to show you how much potency can be extracted by turbocharging.

The rear seat had large amounts of legroom, and plenty of space between your head and the Skyscape sunroof.

The seats were perforated leather with 8-way power and 2-way lumbar support on the driver’s seat, and manual slide and rake adjustments on the passenger seat. All of that was set for a base price of $34,000, which is a true bargain these days for anything even pretending to be an SUV.

The test vehicle came loaded with 17-inch alloy wheels and all-season tires, and the AT4 package upgrades lifted the sticker price to $39,960, a significant boost to the base price, but still reasonable for a decent sized SUV.

The headlights, taillights and running lights are LED for brightness, and the option list starts with a Bose audio system with an amplifier, a GMC infotainment system with an 8-inch diagonal screen, touchscreen navigation system with voice recognition Bluetooth and assorted safety measures.

Those consist of lane-change alert with side blind-zone alert, adaptive cruise control, for $645; and then some nice optional features, including the Skyscape sunroof with power sunshade for $1,495, and the tech package for $850, that included front and rear park assist and surround vision to aid in parking.

In this time of auto makers filling every niche we can imagine, it makes good sense for General Motors to make an assortment of SUV sizes, and young families looking for a reasonable family truckster for the growing family would be wise to check out the Terrain, among the various models offered by GMC.

The EPA estimated fuel economy of 25 city and 28 highway are reasonable to attain with the little engine that can.

As a starter SUV, the Terrain AT4 with some added trim and beefing up to be more rugged than some, is the perfect stepping stone on the way up to Acadia and then Yukon and Denali, and even Denali L for the extended giant.