Getting a ‘seat at the table’ 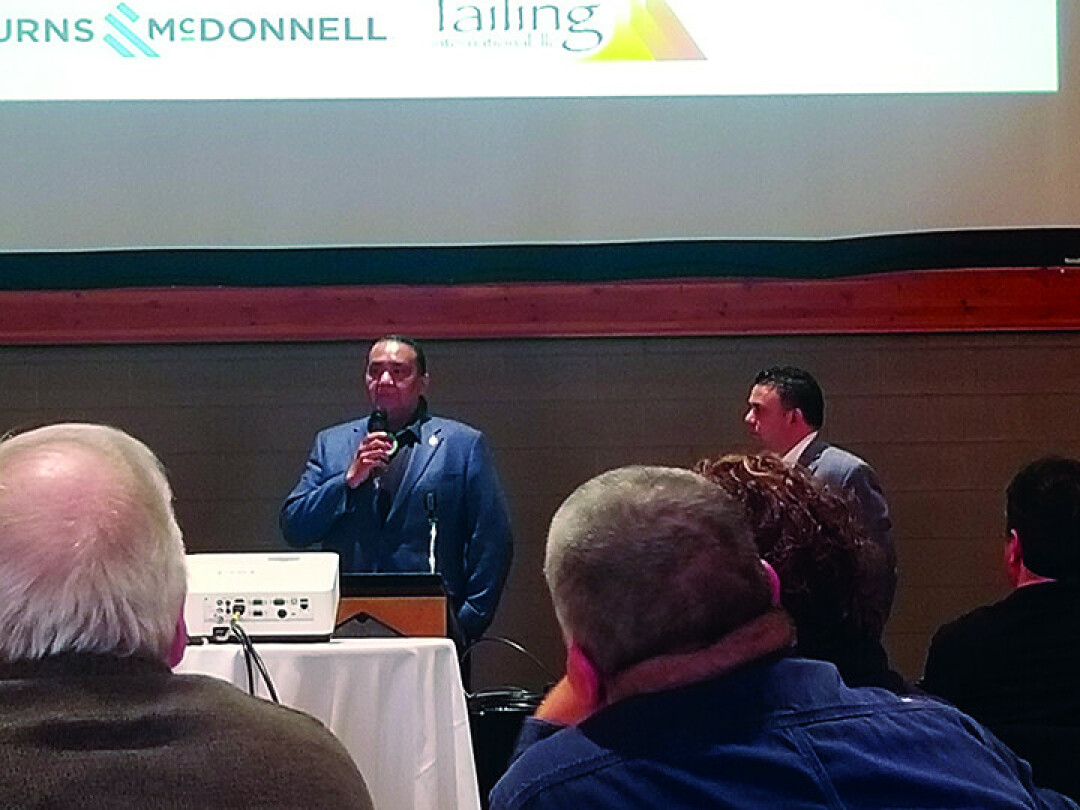 “Just take a pinch and hold it in your hand. It is tobacco,” the man said, carrying the pouch around.

The man next to me was also not familiar with this ritual.

Though this Spring Networking and Jobs mixer was hosted by the Minnesota Tribal Contractors Council (MNTCC), the construction company owner next to me, like myself, was not Native American. He explained lots of regional contractors of different ethnicities came to these events to network, find employees, make deals and friends. This was also his first time at one of these events.

After some silence, Terry Kemper was beating a drum singing a beautiful Native American song.

The booming drums and the man’s high voice reverberated off the giant supports and the tall steel ceiling looking down on what was once a great industrial space and is now a place for meeting.

The man’s voice died down we were told to go outside and lay down the tobacco somewhere.

Around 100 people at 16 tables, many very well-dressed for the event, went out the back door. Most of them placed the tobacco someplace on a long and thin island of grass between the street and parking lot.

It was nice outside in this warehouse district with wide streets and not that much traffic.

On the walk back inside this event at Clyde Iron Works, many people happily exchanged greetings, obviously knowing each other. Soon everyone was back at their tables.

You could say the theme was “a seat at the table” as that phrase was repeated often throughout the event. It was used in slightly different contexts by different speakers.

For Duluth City Counselor Renee Van Nett “a seat at the table” is about her being, what she believes, to be one of the only Native Americans from this area to be in a position of power. As she welcomed travelers to her city, she said it is very hard to get into a leadership position in this city that is 94% white, especially if you live by your values.

To help his community have lots of “seats at the table” economically, speaker James Jones Jr. founded MNTCC to advocate for Native workers and Native businesses in the trade industry.

For the speakers James Campos and Kevin Frost, much of “a seat at the table” was mostly about tribes taking advantage of the billions of federal dollars available through the department of energy, by partnering with the government on energy projects.

James and Kevin are former Department of Energy Officials. They founded the company Right Energy Services (RES). Kevin mentioned growing up in some reservations around the late ’80s and early ’90s, which he laughingly said he considers to be “recent,” where there was no electricity or running water.

He mentioned how you don’t realize how nice it is to have these two conveniences if you’ve always had them. He said that being highly involved with energy production will help tribes to have greater autonomy and will free them to solve other problems in Native communities.

For Josh Ronk and Hans Wronka, who lead programs for the engineering company Burns & McDonnell “a seat at the table” is about how they have a chance to partner with tribes to produce large amounts of solar energy on tribal land. They explained in detail the placing of the solar panels, the running of various lines, and how large inverters convert the DC electricity coming off the panels to AC electricity ready to be put on the grid and sent to homes.

The members of the Middle of the REZ Road Native American Podcast played a clip from the show and talked about how their podcast is about Native issues and employment opportunities.

After this, we enjoyed a buffet of really good heavy appetizers including what I think may have been delicious acorns. Then there was some networking time and cultural demonstrations. People made friends and formed connections.