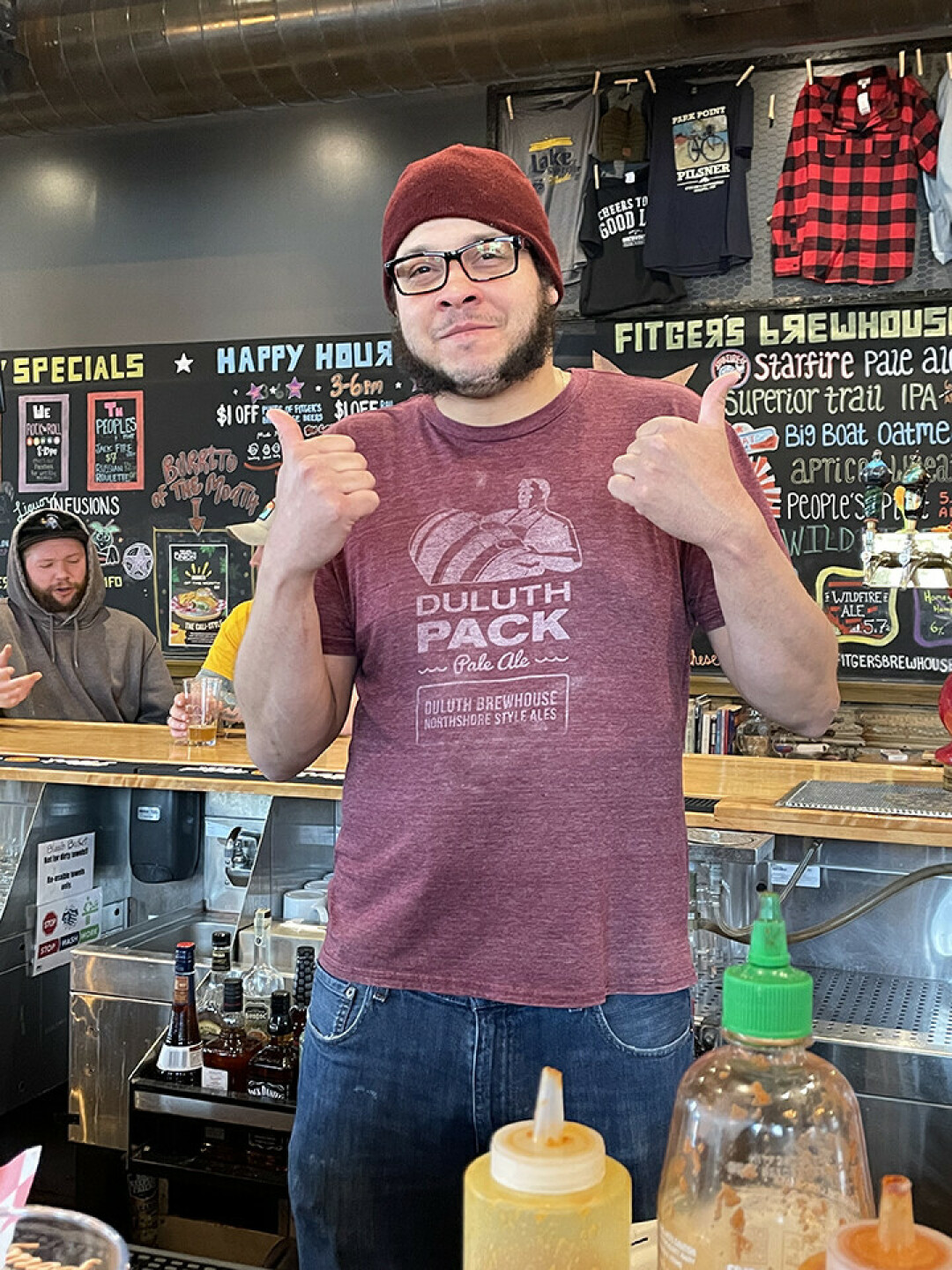 Chad, bartender at Burrito Union, and, top right, the Pomegranate and Ginger Margarita he made. Photos by Alma Jorgenson.

The highlight of doing these cocktail reviews has been getting to know the bartenders of the Twin Ports region. That rings true for this week’s stop at Burrito Union.

Burrito Union is an establishment that pays homage to the Russian communists. It could be a burrito restaurant straight out of Doctor Zhivago.

The people who work at the Burrito Union are always very nice and fun to interact with. During this trip, I have the pleasure of getting to know the bartender Chad.

Chad is an experienced bartender, having worked in the industry for 11 years in the Twin Ports region. He is also a local musician who was really looking forward to Home Grown.

I have been to Burrito Union many times, often the day after a long night of delicious cocktails. I have always gotten their Bloody Mary, which may be the best Bloody in the Twin Ports. However, I didn’t want to go for my old stand-by this time.

I asked Chad what his best drink was and he started making me a Pomegranate and Ginger Margarita, which is a secret menu item.

I was very curious as to what went into a Pomegranate and Ginger Margarita; Chad happily spilled his recipe.

The main alcohol of the drink was tequila – no surprise there. Added to that foundation were pomegranate juice and ginger schnapps. This was shaken and poured into a pint glass with a thick piece of lime.

There’s really no way you can go wrong with a pint of margarita. A lovely twist on a staple, following right in line with the Burrito Union brand.

The moment Chad set it in front of me I knew it was going to be a good one. It was a light pink color with some foam on the top from the shake.

I can’t say enough about the lime, it was perfect. The lime carried the first impression of this drink. It was the freshest lime I have had at a bar in a long time; the thick slice was the perfect addition.

Without even tasting it I knew the bartender took drink building seriously.

This drink smelled amazing. I do love Moscow mules. With the ginger the first smell had a muley hint.
The first taste I got when taking a sip was the sweet and distinctive flavor of the pomegranate. The second taste was the spicy ginger. These two flavors paired together in a way that I was expecting them to. The combination of flavors both worked to help bring out the other.

It was clear that this drink was made with good balance. Too much of either flavor could have completely overpowered the other. This is a combination I wouldn’t have thought of for a margarita but it really worked.

The tequila flavor was subtle but the tequila buzz was there. This is an easy-drinking cocktail, and it packed a nice punch. This is something I look forward to drinking after a long summer day of hiking. It had the same refreshing qualities as a big glass of lemonade.

The simplicity of this drink adds to the brilliance of this combination, two fresh flavors, and tequila.

The drink as a whole was very dry. I like that in a cocktail, so that was a plus for me. Both ginger and pomegranate are dry flavors, combining them was a bold move that really worked. Having a dry margarita was something I didn’t expect to be having, and it totally worked. I would absolutely order this again.

There is nothing that I would have added or done differently with this drink. Chad’s recommendation was stellar.

While talking with Chad about my love for Burrito Union bloodies, I let him know that one of my favorite things about them is how they are the same every time I go there. He told me that both the bar staff and the cook staff work to make sure they are doing everything consistently. If it works, it works. This works.

Burrito Union’s vibe also adds to the appreciation of the drink. The music is always spot on, really helping to create an atmosphere that draws people of all kinds.

This bar has a neighborhood feel, but the crowd highlights many of the different people who live in Duluth. There were lots of neighborhood characters sitting at the bar having a beer. This is a place for local beer drinkers. If I lived closer I may count myself among their ranks.

Burrito Union has never let me down. Their burritos are full and their drinks are strong. For $6 the Pomegranate-Ginger margarita hit the spot. It was a ray of sunshine during a dark rainy week.