Hatred in the world 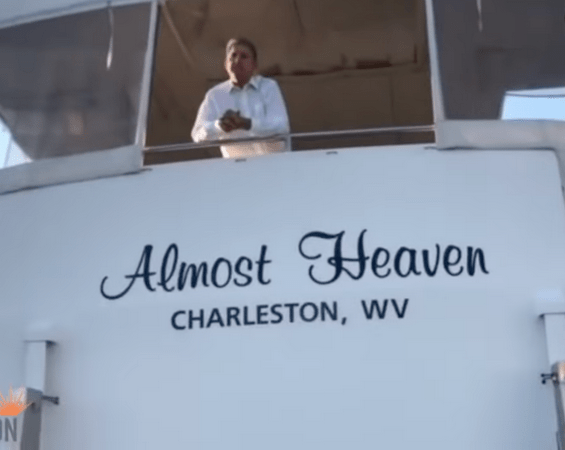 Senator Joe Manchin on his yacht.

Man was made by shock and agony

The printing presses and all those tiny chips fill our eyes and ears every second with words and images of war, destruction, and the slaughter of human beings in Ukraine and other spots on the planet. Vladimir Putin is just one man blamed for creating most of those images.

One of my favorite poets, Robinson Jeffers, has captured the scenes and sounds of the moment and given reasons better than most for why some men hate the world:

“Never blame the man: his hard-pressed ancestors formed him:
The other arthropod apes were safe in the great southern rain-forest
And hardly changed in a million years, but the race of man was made
by shock and agony….a wound was made in the brain
when life became too hard, and has never healed
It is there that they learned trembling religion and blood sacrifice
It is there that they learned to butcher beasts and to slaughter men
And hate the world.”

While Jeffers explains how we suffered a big wound in the brain, G. Michael Schneider of Minneapolis, in a letter to the Tribune, presents details to why the wounds in the brains of many politicians prevent them from solving the tsunami of problems facing our democracy – such as it is. His response is the best summary of current conditions in the Divided States of America. He nails it to the door of the Republican Party, the White House and Congress with a large spike (edited for brevity):

“We all know how magicians pull off their amazing tricks: misdirection. While we are staring intently at the card, their hands are under the table doing the dirty work. Well, the same is true about many politicians. While we listen intently to their public rants about pedophilia rings, their hands are “under the table” cleverly deceiving us by not addressing really important issues – things like climate change, racial and religious bigotry, Ukraine, and the general breakdown of the working class and rural society.

This lets them avoid expressing positions that might anger their voters and lose their support. So they pander to the base with made-up concerns, like transgender bathrooms, like hordes of murderers and rapists crossing our southern border.

I do not care whether you vote GOP, DFL, independent or choose not to vote at all. But I do care that we all demand forthrightness and intelligence from our political candidates. So the next time some elected official starts railing about CRT, please stop them and say you would rather hear those educational plans for closing the achievement gap, helping failing schools, increasing teacher salaries and improving STEM education. And when a politician screams “stop the stea,” politely interrupt and say you would prefer to hear their policy positions on inflation, taxes, Russian cyber-hacking, abortion rights and income inequality.”

It can’t be said better. He didn’t specifically mention hunger in Minnesota and the world, the bullying of the LBGRQ+ community, student debt and gun control, but we are all limited by space.

From junk bonds to space junk to junk history, religion, science and gender

High yield bonds have been investment strategies for many years since investors became gamblers. They have been called junk bonds for less than a century. Junk bonds brought both wealth and poverty.
The term “junk” has now morphed to describe history, religion, science and gender identity as the minority Republican Party attempts to gain absolute power over the majority.

The current pandemic brought on anti-vaxxers, anti-maskers, anti-social distancing, anti-economic closures and junk science instead of real science. And then culture junk such as abortion, contraceptives and religious warfare brought on more political wars.

More than a half-century ago Dr. Martin Luther King, Jr. was shot to death in Memphis where he was building The Poor People’s Campaign, an organization that would have to be reckoned with in the future. (It still exists today!)

Besides stating his opposition to the Vietnam War, he declared that racism, poverty and militarism had to be strenuously fought by millions of poor people if they were going to change their position at the bottom of our national life. It hasn’t happened yet. Junk stuff continues to dominate.

We now have 60% more Americans living under the established government poverty line that existed more than a half-century ago. We now have 140 million poor or low-income people. The Poor People’s Campaign, now led by Reverend William Barber of the Episcopal Church, has determined that during the pandemic poor counties have experienced twice the number of deaths as higher-income counties.

In the richest zip codes we live to be 95, in the poorest it’s slightly above 60!

Research by the Poor Peoples Campaign (PPC) indicated that 250,000 Americans died early in 2000 because they were poor and low-income, before we had COVID-19.

Reverend Barber has asked the government to do a comprehensive study of the effect of virus deaths on income levels so we can identify the reasons why the poor die in such numbers. He claims the increased deaths are not specifically on the vaccine and other rules alone.

He wants to know if the death rate can be blamed on some of the following factors, including work and life conditions that predated the new pandemic. For an example, 22% of Native Americans, 20% of Hispanics, 11% of Blacks, 7.8% of Whites, and 7.2% of Asians did not have any health insurance in 2019. What effect did that have? What about the effect of income distribution and housing?

In 2019 before the pandemic we had 87 million people uninsured or underinsured. We even had 14 million families who couldn’t afford to pay their water bills. More than half of our children lived in food-insecure homes. Those are homes that have to worry about the next week’s food.

This was at the same time one of our billionaires who traveled on a $500 million superyacht wore new clothes each day and threw them away the next. His yacht crew joked that they might be the only yacht crew to clean the decks wearing $200 shirts and $500 cashmere sweaters!

Senator Joe Manchin, who has been made the most powerful Democrat in Washington by the profilibuster and bipartisan hallucinations of President Joe Biden, is being marched on by his poor and low-income West Virginians led by Reverend Barber and the PPC.

Of course, he is hardly ever in his home office. He has to be confronted on his yacht Almost Heaven, tied to the docks of an expensive Potomac River marina where he lives and throws parties for fellow senators.

He doesn’t bother talking to his 710,000 poor and low-income constituents, some of whom marched 23 miles to see him in his W.V. office. He leaves that up to his staff. He’s not the food bank type. He’s a U.S. Chamber of Commerce type who votes against voting rights such as the John Lewis Voting Rights Act and the Freedom to Vote Act, sits with Republicans in the House chamber, and blows up the Build Back Better Act by refusing to rid the U.S. government of the filibuster.

Could it be because he owns a coal company that makes him about a half-million a year? He will be the Democrat most responsible for the election of a Republican Congress in 2022 and a Republican president in 2024, whether Trump or another sociopath.

Barber’s PPC recently traveled to New York City, the playground of the rich, to call attention to the 47,000 poor people who are homeless in the city with most of our billionaires in $50 million to $150 million mansions.

Every Friday the Wall Street Journal runs a multi-page section called “Mansions” which reveals the week’s most expensive mansions changing hands. I have not seen an issue which pictures the homeless shelters occupied by 14,000 homeless children every night in our financial capitol.

Does the Bible say anything about the poor and poverty?

Some Bible experts say the good book mentions the poor more than 2,000 times and accuses the rich and powerful of causing poverty.

I wonder where the thousands of ordained ministers who preach the prosperity gospel got the idea that the Christian God rewarded those who got rich. About once a year a man of the cloth who wears cashmere writes an article in the mainstream press declaring that Jesus Christ is not a socialist. Could he possibly be a democratic socialist or moral capitalist?

What really happened in the temple? Should the rich inherit the earth instead of the meek?

That famous picture of President Donald Trump sitting at the Resolute desk in the Oval Office while a golden gaggle of ministers are reaching to lay their hands on him? Most of them preach the prosperity gospel! Many of them live in million dollar mansions and fly around on private jets.

Of course, the Bible offers an infinite cafeteria of ideas about poverty one can choose from.

Funny the words abortion, transgender, gay (except for emotions), gender, lesbian and asexual never appear in the Bible but are on the list of appetizers in today’s cafeteria of ideas.

Is it difficult for a literal interpreter of the Bible to make choices for their political diet?

Andrew Carnegie did not have a wound in his brain

Between 1958 and 1970 I spent many hours at the Fargo Carnegie library built with a big donation by a once-poor Scot who became one of the richest men in the world by making and selling steel. He is still one of our leading – and purposeful – philanthropists. He donated money to build 10 libraries in North Dakota and a total of 3,000 in the United States and Scotland. Among many museums and buildings he financed, New York’s Carnegie Hall is perhaps the best known.

Carnegie had only two years of formal education, but his family were readers and he educated himself in many fields as he climbed the ladders to success in the business world.

After moving to the U.S., he started his working life at age 13 in a cotton factory, taking home $1.20 a week to his family. He then moved to railroad jobs, starting as a telegraph messenger, then telegrapher, then superintendent of the Pennsylvania Railroad.

Then came U.S. Steel, where he made his fortune. Then came books about the use of wealth, ending with The Gospel of Wealth in 1900. Every Fortune 500 company should have his message about wealth read at board meetings:

“The problem of our age is the proper administration of wealth, so that the lives of brotherhood may still bind together the rich and poor in harmonious relationship.”

Carnegie must have read it before making decisions concerning his philanthropy.