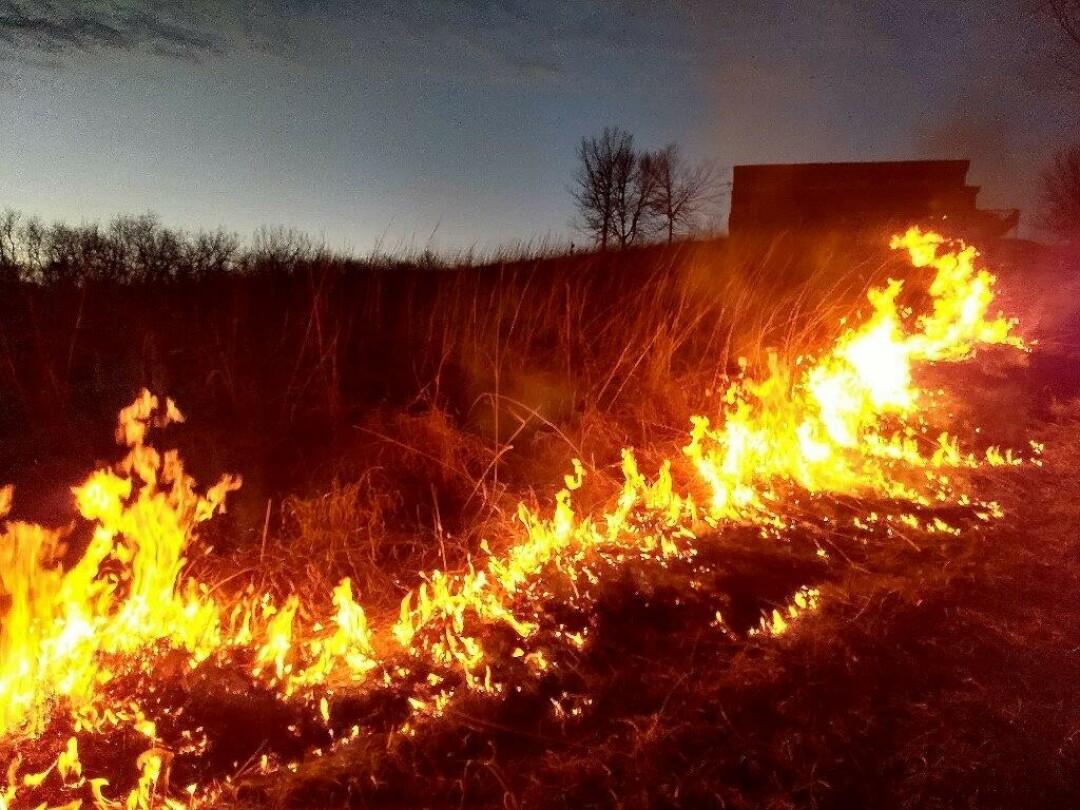 Back fire: The mowed path of sledding hill below my childhood home doubles as a fire line. The flames of this backfire are sandwiched between short green grass and the prevailing winds, so they are less likely to get out of control. Photo by Emily Stone.

Flames crackled at my feet and the sunset clouds reflected a little of their orange glow. The heat on my face contrasted with cold water on my back as I held the nozzle of a backpack sprayer at the ready. Glancing downhill, I could just see my dad’s head above the smoke and flames as he walked the fire line with a drip torch, a magic wand of destruction.

As luck would have it, I’d arrived home just as the weather had given us the perfect evening for burning prairie.

The house where I grew up in Northeast Iowa sits on top of a hill that was once planted to corn. When my parents bought the land in the late 1970s, they started planting native species even before they drew up plans or built the house.

Each fall, Dad mows paths through the big bluestem for sledding and skiing, and each spring, those paths turn into fire lines for a prairie burn. It’s been years since my timing has been right to help.
Driving around the Midwest, I often squint at the fields of corn and beans and try to imagine the waving oceans of prairie grass that once were.

While Iowa sits at the edge of the rain shadow of the Rocky Mountains, it’s not lack of rainfall that kept the land in grass instead of trees; it was fire.

My dad wasn’t walking the trails with a drip torch back then, so how did early prairie fires ignite?
In a study just published last October, a group of researchers in Illinois combed through records of prairie fires between 1673 and 1905 in an area that spanned from North Dakota to Ohio, and included Wisconsin. They found evidence of 795 fires in newspapers, diaries, explorers’ journals, and other historical documents.

Of those, only five were started by lightning. Native Americans – already being pushed off their land – only set 32 of the fires. The rest were ignited by Europeans, either accidentally, or because they’d learned from the Native Americans how useful fire could be.

For many reasons, the practice of burning prairie diminished. Today, though, wherever people are trying to restore or reconstruct native prairies, fire is recognized as an invaluable tool.

While my yard in Wisconsin is still mostly covered in snow, lawns and weeds had both begun to green up in Iowa. Woody shrubs were beginning to swell their buds, too.

Burning in mid-spring maximizes the impact of the burn because the fire will knock weeds back and force them to struggle.

Fire is a form of decomposer, and makes nutrients from dead vegetation available for new growth.

While most land managers advocate for burning prairies only every few years, my parents burn around the house on an annual basis. Their hope is that regular burning prevents the buildup of fuel and reduces the danger from an unplanned fire. They also hope – with some science to back them up – that burning around the house will reduce their chances of getting Lyme or one of the many other tick-borne diseases that seem to become more common each year. 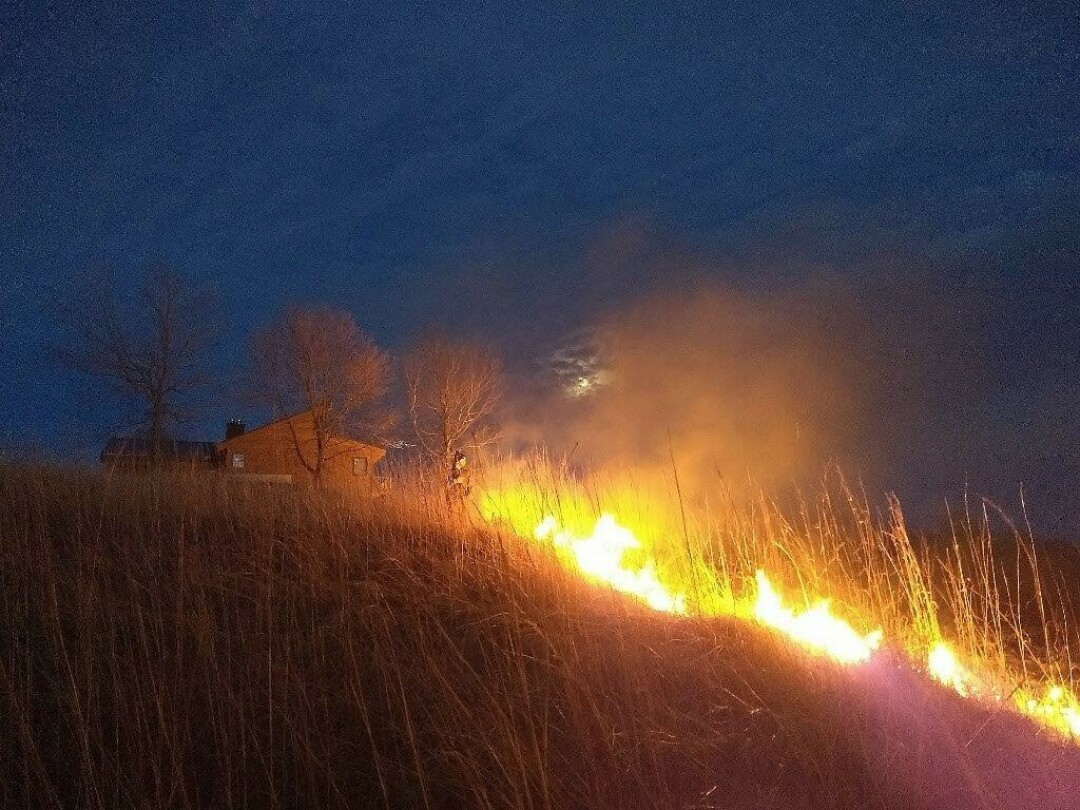 As a campfire-poking kid, I love the idea that setting fires has a scientific and ecological purpose. But burning prairie safely requires skill and planning.

Mom and Dad have their system down so well that they often manage all by themselves, although they were grateful I offered to carry the heavy water pack, and my partner was there to rake vigorously at the fire lines.

Long before Dad set a match to the drip torch, we’d waited for the gusty winds to die down, hosed down the sledding run on the east side of the hill, wet down the strip of lawn near the house, watered the few shade trees, raked around the bluebird house and cleared a space around the electrical box.

Dad even put a barrel over a tiny seedling oak – supposedly descended from Aldo Leopold’s “Good Oak.” Hoses, jugs and rubber flappers all stood at the ready to put out stray sparks.

The first fire Dad set was a backfire – sandwiched between the mowed path and the westerly winds –and it crept along slowly, using up the fuel.

When Dad’s slow, glowing walk finally reached the bottom of the hill, and then the windward edge, we had enough guardrails in place that I could laugh with glee as flames whooshed up the hill. Sparks danced skyward toward a full moon as darkness descended.

By the time we were done, there was no wind left to fan new flames and evening humidity was curtailing the rest. Deep below the blackened soil, a web of roots, burrows, insects and more bided their time.

When the Sun rose on the scene, the pair of bluebirds was already foraging in the ash. Rain in the forecast would bring with it a flush of new growth. The fire’s destruction would soon become renewal.