Two in one: Drink and appetizer 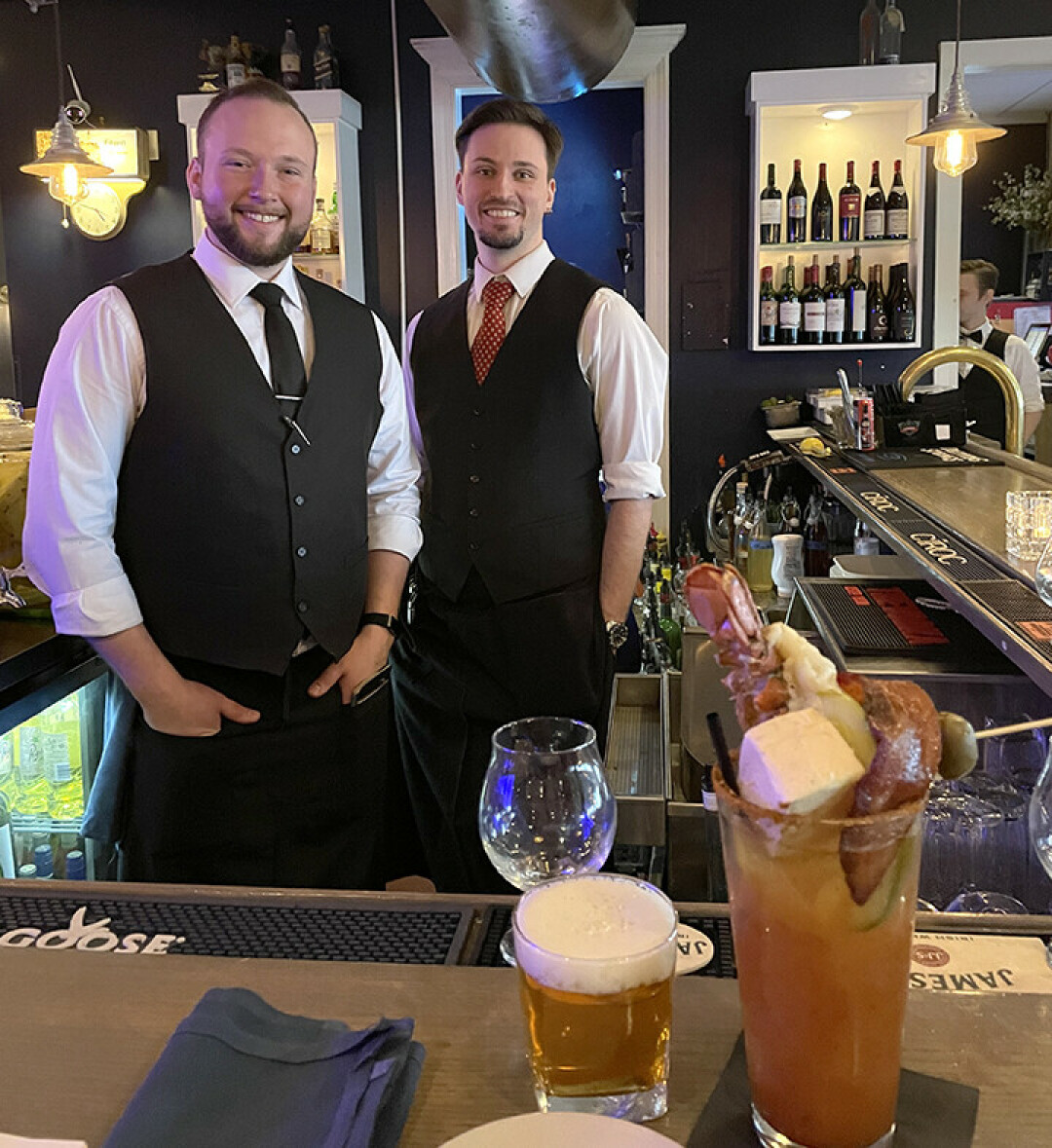 Bartenders Alex (left) and Sean, with the Famous Lobster Bloody Mary at the Boat Club. Photo by Alma Jorgenson.

I haven’t lived in Duluth for a long time, so I’ve been exploring. That exploration has taken me to the Fitgers Building.

Through my strolling through the building and around town, I keep seeing the ads for the Boat Club’s Famous Lobster Bloody Mary.

As an avid bloody drinker and maker, I have always been fascinated. Bloody Mary’s are drinks that are insanely close to my heart. I have spent many weekends working on perfecting my Bloody recipe.

My standards may be higher than the average drinker. This week I found myself in the Fitgers Building and decided to make a stop at the Boat Club.

The very first thing anyone will notice when going into the Boat Club is how very fancy it is. There are white tablecloths and very comfortable bar stools with cushions.

I wasn’t sure if it was a place I could just sit down at the bar and have a drink. However, I was welcomed with true enthusiasm by the two bartenders for the evening, Sean and Alex.

Alex let me know that this was his second day of training and Sean was the bar manager. They looked sharp! Exactly what I would expect from bartenders at a restaurant of that caliber.

I ordered the Lobster Bloody Mary, after a slight pause at the $24 price tag.

The foundation of this drink is the house-infused pepper vodka. This infusion was Smirnoff vodka infused with bell peppers, jalapenos, garlic and black peppercorns.

I was able to get a taste of just this infused vodka and it was full of flavor. It was sweet from the bell peppers and then spicy from the jalapenos and peppercorns. The spice of this vodka hit the front of the mouth and the soft palate in the back. It was more of a spicy feeling than a spicy flavor.

It was the garlic that really made this infusion hit hard. The garlic smell from taking a sip really helped get me in a Bloody Mary mood. I recommend this vodka for this Bloody even if you’re not a garlic lover such as myself.

The ingredients of the actual drink were pretty standard. The Bloody Mix itself was Miss Mary’s Bloody Mary Mix. I was actually surprised that it was not a housemade mix.

I will admit I am not the biggest fan of Miss Mary’s mix, to begin with. It was rimmed with lemon and Old Bay seasoning. I really had expected something more from this $24 drink.
In the first sip, the smell of the smoky bacon really takes over. It leads nicely to the flavors of the vodka.

The average Minnesotan will be able to appreciate the spice level – it truly is Minnesota Spicy. I would have liked to see some horseradish added, with the use of the lemon on the rim it would make sense to have horseradish as an additional flavor.

The toppings of this Bloody Mary are what justifies the $24 price tag. There was an entire lobster tail! It’s probably about 4 inches worth of buttery lobster.

I removed the shell from the lobster and then plopped the tail into my glass, I really wanted to get that seafood flavor. The bacon was some of the best bacon I’ve ever had. It was a maple, siracha bacon. It was sweet and spicy, Minnesota spicy.

I love a good strip of bacon in a Bloody. When the bacon hits the cold drink the fat almost caramelizes around it. With a strip of bacon this sweet it really helped to bring out the sweetness of the maple. It was like bacon candy.
They also had a two-inch by two-inch chunk of Dill Havarti. This cheese was very good, but I was unsure of how to eat a chunk of cheese that large.

I got to play with my food at a white tablecloth restaurant. That was actually pretty fun. Eventually, I did ask for a knife so I could slice it up, which is something I would recommend with this drink.

Along with the dill cheese, they also had the traditional dill spear. It was a Filthy Pickly brand pickle. It was insanely fresh and had the perfect crunch.

Along with the pickle, there were two olives, one blue cheese stuffed and the other gherkin stuffed. Both of these olives were delicious; a blue cheese-stuffed olive always goes great in a Bloody.

All of the toppings together were equal to an appetizer. It was so much food. It was all good, which I think should be expected at a restaurant like the Boat Club.

The $24 for the drink really is like a drink plus a charcuterie board for one. It almost felt like the toppings went a bit overboard, but then I just remembered how much I was paying for such a drink.

My expectations for this drink were way too high. I hoped for a bloody that tasted like lobster, but what I got was a pretty standard bloody with a chunk of lobster.

If you’re looking for a place to have an appetizer with an alcohol kick this is the place to get it.
If you go to the Boat Club and want a high-end cocktail I recommend ordering something else on their very unique menu.

Sean, the bar manager spent some time talking with me about the creation of their menu. Many of the drinks feature infused alcohol.

The Boat Club is a fun place to sit at the bar and watch the lake. Next time I will be ordering one of their martinis.