The eyebrows of Julie Adams 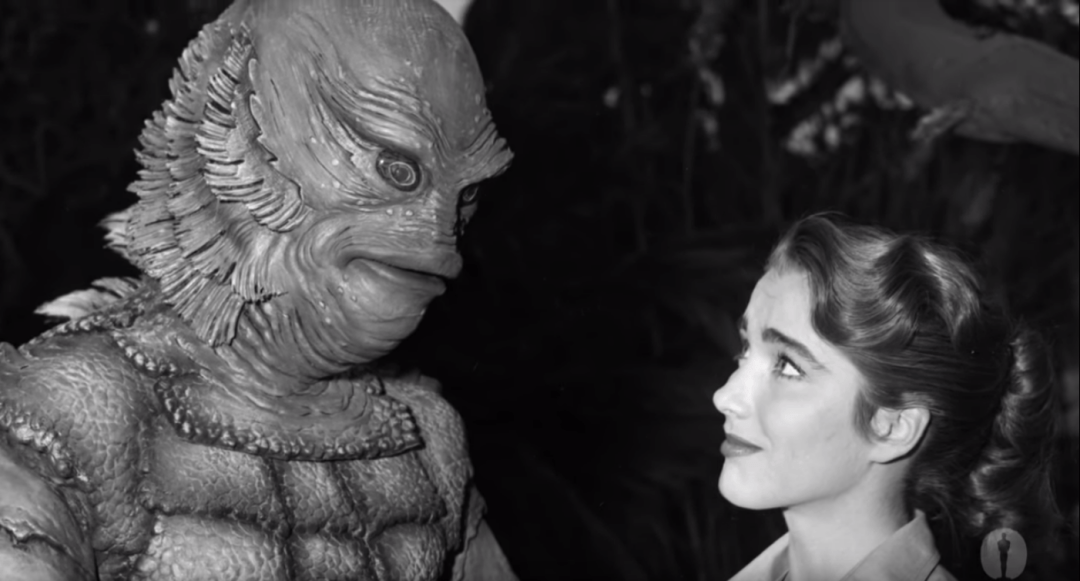 The Gill Man and Julie Adams with her magnificent eyebrows during filming of the 1954 horror classic The Creature from the Black Lagoon.

I fell in love with The Creature from the Black Lagoon as a kid when I stayed up late on a Thursday while my mom was at her bowling league to watch it as the late-night movie on the fledgling WDIO.

Since they were the new station in town, they filled a lot of programming time with movies in the afternoon and after prime time. That included a Friday midnight creature feature with amiable weatherman Jack McKenna as host Professor Fantastic.

The Creature from the Black Lagoon, made in 1954 in 3-D at the end of the first 3-D craze, remains my favorite creature feature for many reasons. The Gill Man, as he is also known, is supposed to be the missing link between fish and man.

I’ve lost track of how many times I’ve seen it, which is why I was a little baffled by my most recent viewing because the entire movie was dominated by the eyebrows of the only female in the movie, the lovely Julie Adams, who, because of this film, is a major scream queen pin-up.

Even though she had been in scores of movies before this, many of them westerns, and more films and TV followed, Creature was her defining moment, much to her dismay. It followed her the rest of her life.

But she really had a chance to shine in this classic beauty and the beast story.

I just could not get over how her thick, lush eyebrows were dominating this viewing. Even in long shots, her eyebrows were standing out.

Co-star Richard Carlson has a decent set of fuzzy caterpillars above his eyes, but they are nothing compared to Julie’s dark, angular brows.

I was so disturbed by this eyebrow revelation that I needed to talk to someone about it, someone who would understand, and the only people who came to mind immediately are Kelly Florence and Meg Hafdahl, two women who think and talk about these things in a series of books and in their podcast Horror Rewind.

Their Science of… series began in 2019 with The Science of Monsters, which included a chapter on the science behind the Gill Man, so I reached out to them to talk about Julie Adams eyebrows in The Creature, and Meg replied, “We’re your women.”

It turns out Kelly had an even more memorable first experience with The Creature than I had. She believes it was WDIO that had a special 3-D showing, complete with the glasses (unfortunately, WDIO does not keep an archive of promotions).

“The whole family sat around in our 3-D glasses around our TV, and it was just a magical experience,” she said. “There’s just nothing comparable to that in my childhood, because we were watching this scary movie in 3-D.”

And, better, yet, she actually met Ricou Browning, who plays the Creature in the underwater scenes (a different actor – Ben Chapman – played him on land). At age 92, Browning is the only cast member still alive.
“He was at a Comic Con that we attended,” she said. “We were selling books there, and so I was able to give him a copy of our book The Science of Monsters because we wrote a chapter on Creature from the Black Lagoon.

But what about Julie Adam’s eyebrows?

“Eyebrows go through a lot of trends,” Meg said. “She can pull it off. It harkens to Elvira (Mistress of the Dark), who came later of course, Bride of Frankenstein who came before. It’s fashion.”

“Eyebrows, you don’t realize how much they matter until you notice them,” Kelly said. “A change of shape or color, and all of a sudden it’s all you notice. Meg mentioned Elvira. I was thinking of Vampira as well. Her eyebrows had a gigantic slant, and I think later in life she shaved them off entirely.”

The underwater sequences between the Creature (Ricou Browning) and Julie (actually, it was swimmer Ginger Stanley in the water sequences) are some of the most beautiful and menacing images in the movie. As she swims, the Creature follows, swimming upside-down beneath her. He could easily overpower her, but his curiosity about her proves he is more human than monster, and we feel empathy for this curious creature and his good sense not to overstep obvious boundaries between their two very different worlds.

Also contained within this tight 79-minute film is one of the greatest horror soundtracks ever written, full of blaring horns and a sense of dread.

“Absolutely,” Kelly said of the soundtrack. “It’s so incredible how much a soundtrack adds to the tone of the film and the feeling.”

Several studio composers worked on the soundtrack, including Henry Mancini, who had a seven-year tenure as staff composer at Universal-International. He reportedly said that of all his work for the studio – which included the music centric The Glenn Miller Story – his favorite was The Creature.

I mention that Creature was director Jack Arnold’s second 3-D movie. The year before he had done It Came from Outer Space, also starring Richard Carlson. In 1955 he did Tarantula, and in 1957 he did what many consider to be his masterpiece, The Incredible Shrinking Man. I say Creature is his masterpiece.

“Those are all favorites of mine and Meg’s,” Kelly said. “We would pop in an old black and white movie when we first became friends. It was great to find someone who was into all these old horror movies.”

“I really enjoy a lot of the sci-fi elements of 1950s horror,” Meg said. “There were a lot of creatures growing in size and aliens. It goes back to what people were scared of in the 1950s. It’s hard to find good sci-fi horror these days. That’s a blanket statement, but I sure love it from back in those days.”

“Thinking of the equivalent from a few years ago, Guillermo del Toro’s love letter to this movie, The Shape of Water. I hope it brought a new audience to this movie to see why it is so beloved.”

Kelly and Meg are working on the fifth book in their series, The Science of Witchcraft. In addition to writing together, Kelly teaches communication at Lake Superior College in Duluth. Meg now lives in Rochester and writes female-driven horror fiction, including the novels Her Dark Inheritance, Daughters of Darkness and the short story series Twisted Reveries.