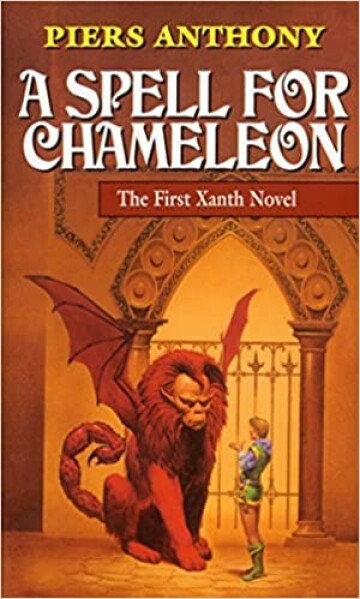 I have seen a lot of Piers Anthony books on the shelves, and I assumed he was a fantasy writer. Then there was a story by him in one of my comic fantasy collections. He usually writes novels, so that was different for him. It was humorous but weird.

The introduction to that story said that his Xanth series was comic fantasy, so on the strength of that, I bought a few used books. I have only sort of read the first book, A Spell for Chameleon, and have started on the second, The Source of Magic.

The map is from the web, and is identical to the one in the first book except for the typo at the top. Pogo Possum’s home, the Okefenokee Swamp is identified as the Ogre-Fen-Ogre Swamp in the book, not the Orge-Fen-Ogre.

If the author lives near the North Village, then he is slightly to the West of Ocala. The Gap Chasm in Xanth just about follows Rte 4 across Florida, so it might be regarded as an elongated pothole. Mundane starts in Alabama, and Key West is Centaur Island. The Isle of Illusion may be Merritt Island, which is near Cape Canaveral.

I have read a lot of fantasy where Magicians, Sorcerers and Mages wield a variety of spells, and most people have no magic.

Xanth is very democratic in this respect: all the magic in the world is in Xanth, and every person in it has one piece of magic and it is unique.

A Mage is someone whose magic is stronger, but otherwise they are the same as everyone else – they have just one magical ability.

Who keeps track of this?

The King has to be a Mage and male. At the beginning, the King’s magic is the ability to control the weather. He is getting senile, so he is ready to be replaced.

Finding another Mage is the first step. The only other known Mage is Humphrey, the so-called Good Mage. There was another Mage, the Evil Mage, that was banished to Mundania years ago.

The Evil Mage Trent’s ability was to transform things, and he had transformed a man called Joshua into a talking tree.

The Good Mage, whose magic has to do with the gathering of information, doesn’t want to be King.

The North Village is the site of the King’s Court, and it is here we meet Bink, who will be a central character in most of the early stories, at least.

He is a blockhead, very strong and very stubborn. The Good Mage declares him as having powerful magic, but it is not discernible, so the King banishes him from the village, as every person must have magic ability to stay, even though some of these magic abilities are trivial, to say the least.

Anthony has denied being a misogynist, but he certainly is a chauvinist. He loves to describe women’s bodies, especially the bare-breasted ones. Among those are a centauress (Is that the correct word? I have only ever seen male centaurs depicted.) He describes her as being beautiful in an equine sort of way, and of course all centauresses go without clothing. She is more well-endowed than human women, as she would have to be, I suppose, since her offspring is mostly horse.

Which brings to mind another question: does a centauress also have standard mare equipment between her legs? If so, who feeds off of that?

Our hero rides her as she jumps a 10-foot chasm, and accidentally cops a feel while flying over. Of course, they need to discuss this when they land. It should be noted that the boys from the Village often visited the centaur grounds to stare at all the breasts.

Not Bink, of course, as he is too strait-laced.

Bink also runs into a whole village of bare-breasted women whose menfolk have disappeared, and mermaids, who never wear a bra. (Are we having fun yet?) 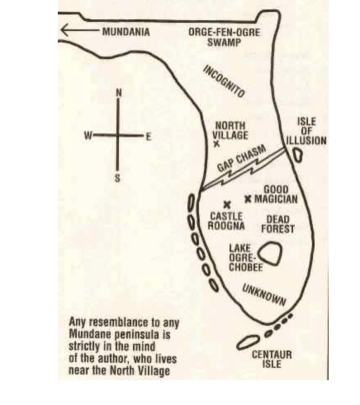 He has to get across the Gap Chasm to get to the Good Magician’s castle, which is much too wide for the centauress to jump. Among other things, there is a Gap Dragon to contend with. A minor inconvenience for our hero, because it seems it is impossible to take a step on Xanth without having to fight off meat-eating plants and animals.

Progress is painfully slow. because every fight has to be described in painstaking detail.

I hate that. It reminds me of 19th century authors who described scenery like that. Charles Dickens got paid by the word, so he became an expert at taking two words and expanding it to two paragraphs. I prefer stories that move a little quicker.

On the other side of the Gap Chasm he meets Iris, a Mage whose magic ability is illusion. I want to say she first appears bare, but I don’t want to look it up, so maybe it was pasties or those tassel things. In any case, he turns her down, no matter what she looks like.

He does meet the girl of his dreams in the Chameleon, a woman who cycles from ugly and very smart, to ravishing and very stupid. Her middle part of the cycle is the woman he falls for.

He also meets Trent, whose wife and child died in Mundania. He is a changed man and tries to undo the harm he did when he was younger. Bink still thinks of him as the Evil Mage, and he believes it until the end.

At Castle Roogna, he meets a beautiful ghost of a woman named Millie, who had been murdered 800 years before. Millie’s magic ability is SEX APPEAL. Sounds stupid to me, but it’s magic to the author.

In the comic fantasy I like to read, the humor comes from interaction among the characters. There is none of that in these books – all interactions between characters are deadly serious.

Among the more common deadly plants our hero encounters is the tangle tree, which sends out vines to trap its victims, and carnivorous grass, which will send its blades into you and tie you to the ground if you happen to lie in a patch of it.

There is also a lethargy tree that saps your strength if you sit under it.

There are also useful plants. When our hero needs new shoes, he goes to a shoe tree and picks a pair. He empties out the seeds and puts them on.

One character goes to a breadfruit tree and picks a loaf of raisin bread.

Despite these amusing sidelights, this is not my kind of comic fantasy. When I said I have sort of read the book, I mean I skimmed it, trying to skip the tedious descriptions of battles.