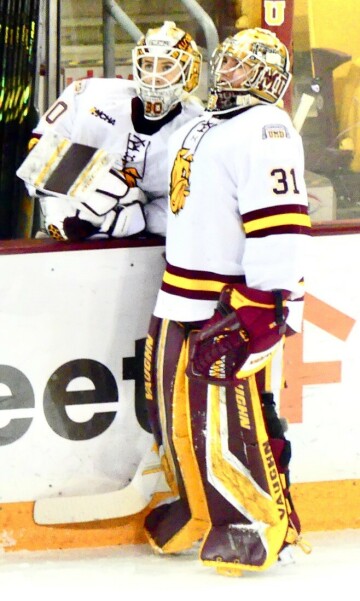 When UMD women’s hockey coach conducted a post-season Zoom media conference last week, she talked about how pleased she is that goaltender Emma Soderberg has decided to return to UMD as a fifth-year senior, even though her decision undoubtedly prompted Jojo Chobak to enter the transfer portal and leave the program with three seasons of eligibility remaining.

In anticipating her four incoming freshmen, I asked Crowell if she had been shopping the transfer portal, and if there were any players like Elizabeth Giguere out there this year.
“There aren’t many players like Giguere anywhere,” Crowell answered.

Undoubtedly true. Personally, I will be happy when the college hockey seasons return to normalcy and end when the final play of the national championship game is over.

That hasn’t been the case for the last year or two, when the end of the season means time to re-recruit players from other programs who might be interested in transferring.

It makes a lot of sense to have college hockey resemble all-day free-agency, and it worked for both UMD programs this past season.

The UMD men’s team became the recipient of Casey Gilling, who joined the Bulldogs for a fifth season and wound up centering the first line for the Bulldogs, who made it into the NCAA tournament before losing in overtime to Denver in the West Region final.

The UMD women’s team struck an even richer vein of gold when Elizabeth Giguere, who had won the Patty Kazmaier Award while leading Clarkson to the NCAA title, decided to come to UMD for a fifth season of play. She was brilliant, forming a potent 1-2 punch with Gabbie Hughes that took the Bulldogs all the way to the NCAA championship game.

The flip side of all the incoming players on the move is that an outstanding prospect like Chobak might leave, just as sophomore defenseman Connor Kelley did from the men’s team.

Both moves started the social media – and sometimes regular media – wheels churning, wondering about hidden unrest within a team that might prompt a player to leave.

The explanation, however, is simple and in most cases averts the controversy. Because the NCAA cancelled its tournaments in 2020, it gave those seniors who were cheated out of their final season the chance to return and play that season after their eligibility would ordinarily run out. They made it a blanket deal, so any player could enter what they call the “transfer portal” to mean they are looking for a new school and will not return to their present one.

Some colleges over-recruit, attracting more players than they need and then unfairly dismissing prospects or breaking their agreements to avoid going over the roster limit. As it stands, those schools might end up with too many players and have to pull scholarships.

The days of the free extra season are about to end, and rosters will return to the limit of 18, who face a lost year of eligibility for transferring from a men’s program, even though the women have had that loophole ever since starting NCAA hockey.

Colleges also try to convince prospects coming out of high school to spend a year with a junior team, which allows NHL length seasons for players up to age 20, and having more experienced freshmen make a stronger team.

UMD has a couple of such players coming in next fall after a year or two of junior.

One is Jack Smith, an outstanding center at St. Cloud Cathedral, which beat Hermantown in the state final two years ago. He went off to junior, and when such players get to age 20 they have to come to college to continue playing.

So a college might have to choose to cultivate their program by adding good new players, which might mean encouraging a current player to enter the transfer portal, or at least accept the loss of such a player gracefully.

In the case of Jojo Chobak, she had a brilliant season despite never having started a game until Emma Soderberg went off to tend goal for Sweden in the Beijing Olympics.

Her first start was a shutout, and she was named player of the week. When Emma returned, she might have been exhausted, but she certainly wasn’t at her usual peak, and Chobak relived her one game, and started and won in her place the next night, too.

It appeared that she may have taken over the No. 1 role going into the NCAA tournament, but Crowell went back to the more experienced Soderberg.

After UMD lost a heartbreaker to Ohio Sate in the NCAA final, Soderberg didn’t change her plans for the future. But she thought about it.

“I started thinking about what my options were,” Soderberg said. “My plan was always to come to UMD, play four years, then go back to Sweden. I knew that UMD was the best option for me to play hockey, so I went home and talked to my family. They were very supportive. I kept my decision process to myself, but there is no other place I want to be.”

Crowell said she kept Chobak apprised of Soderberg’s options, and explained that she ideally would like both of them back, possibly to alternate next season. But Chobak, a freshman from Chicago, knew she had proven she could play under WCHA pressure – including a 1-0 shutout over Ohio State – and decided to test the transfer options.

“Jojo carried us through those 10 or 11 games when Emma was gone, and we believe in both of them,” said Crowell. “But she decided she wanted to go somewhere where she could get more opportunity to play as No. 1, and we support her decision.”

There are other movements of area hockey interest. The biggest news locally was the decision by sophomore Max Plante – UMD assistant coach Derek Plante’s second son – to leave older brother Zam Plante to lead Hermantown to an attempted repeat Class A state championship, because he has accepted an offer to join the elite National Development team’s Under 17 team based in Ann Arbor, Mich., for the upcoming season.

That also means Max, who led Twin Ports and Northeastern Minnesota high school players in scoring last season, will also play on the Under 18 team the following season.

The unique circumstance where the brothers played together on the same line was a major attraction. The chance to play a second year with his brother was not enough to prevent Max from leaving, and means Northern Minnesota hockey fans won’t see him play again until he is in college.

The other movement was just as surprising. Trent Eigner, head coach at St. Thomas Academy, brought in deposed Duluth East coach Mike Randolph as his third assistant, then decided to make Randolph – who resigned after being informed by the school administration that they were not renewing his contract for a 40th season – as associate head coach.

Randolph had significant impact on the St. Thomas Academy team, and coached the junior varsity to surprising success, including victories at Grand Rapids and Hermantown and another against Hill-Murray.

Last week, St. Thomas Academy officials informed Eigner they had decided to not renew his contract and were going a different direction. The school opened applications and has since closed them, and Mike Randolph did apply for the opening, as did several other prominent coaches.

Hockey fans are genuinely enthused about the rejuvenated Minnesota Wild, who have clinched a playoff berth and are in excellent position to make a run at succeeding this spring. They are joined, for the first time in my memory, by a legitimately valid Minnesota Timberwolves NBA team.

So compelling is the establishment of the Timberwolves as a valid playoff team that – for the first time in their existence, I watched the Wolves play in their first playoff game at Memphis. It was a rugged, grueling, physical battle, and the Wolves pulled away for a significant 130-117 victory.

They got complete performances from every player in their lineup, and it means Minnesota sports fans have the first spring ever where they can pull for both Twin Cities teams, while the Twins sort out their pitching, hitting and injury problems. 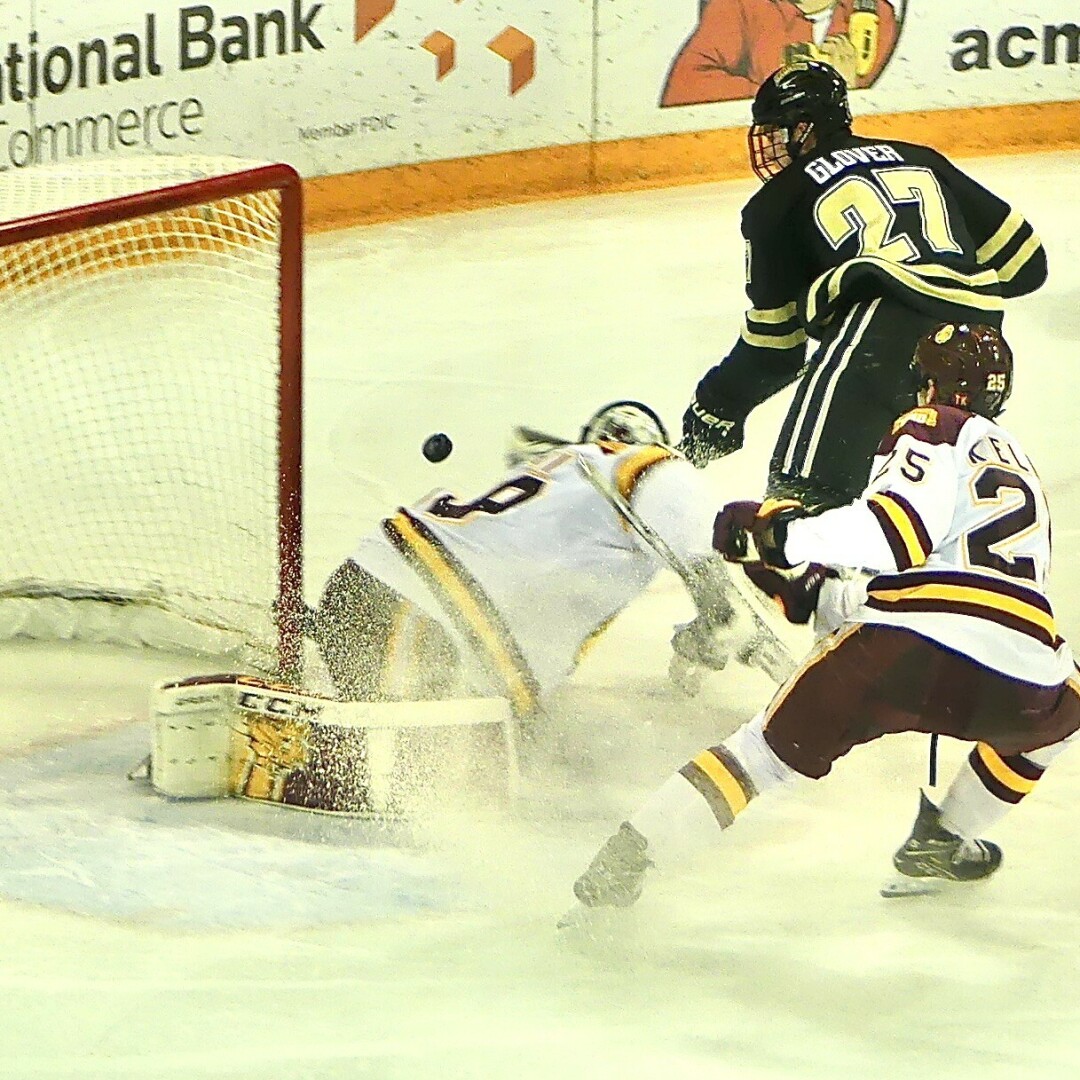