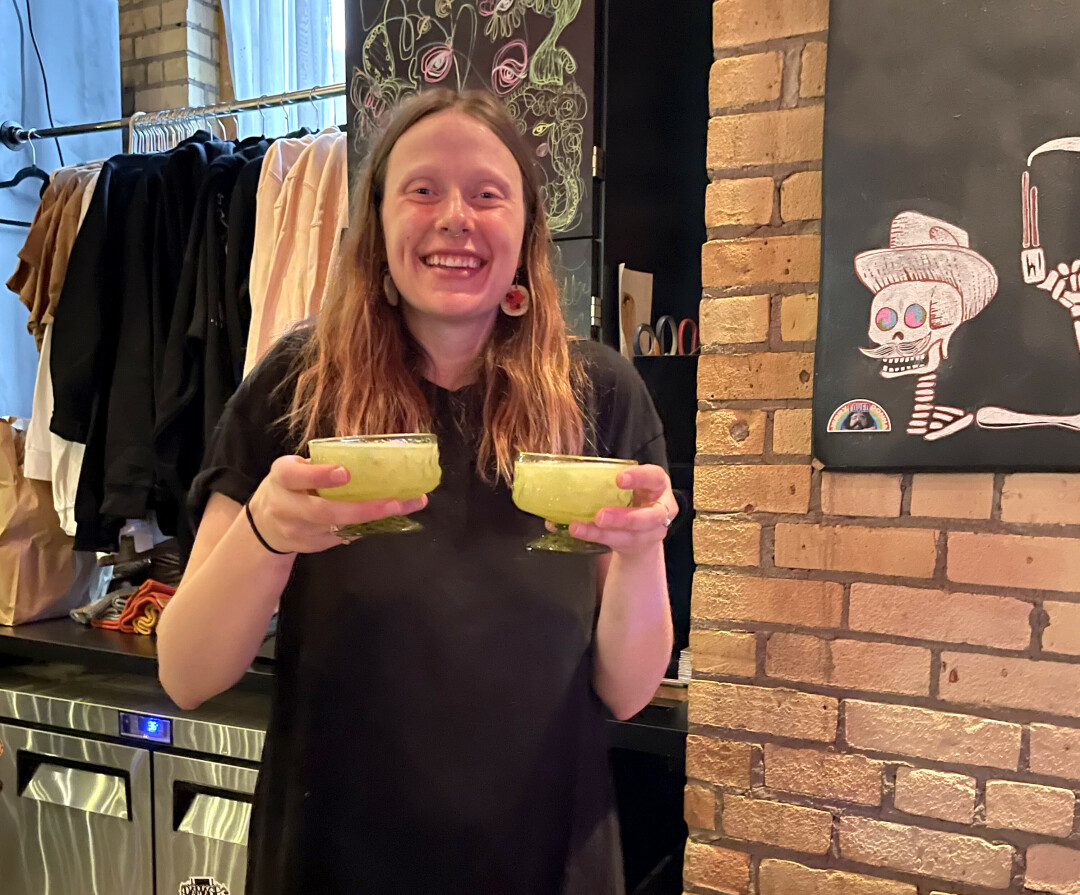 Bartender Mel brings a brace of Mezcal Friend of the Devil cocktails at The Ripple in Canal Park. Photo by Alma Jorgenson.

I had no expectations when I made my way down to The Ripple Bar in Canal Park to try a cocktail.
Before coming here, I think I may have some bias against themed bars. Having met some amazing Deadheads at music festivals across the midwest, I decided to set those biases aside and try out this Grateful Dead-themed bar.

The Ripple has an amazing atmosphere. It is a little carved out corner in Hoops Brewing Company. Microbrews and jam bands turn out to be a delightful pairing.

When I got there I was greeted by a very enthusiastic bartender named Mel. She let me know this was the night of their Grand Reopening, there was a band and lots of old friends reuniting.

I asked Mel to recommend a drink and she recommended a drink called Friend of a Devil.

The Friend of a Devil is a drink that can be made with either Tequila or Mezcal.

Mel recommended that I go for the Mezcal, which I jumped on board with. In my opinion Mezcal will always be the superior agave liquor. It is sweet, smoky and has an almost earthy flavor –the perfect foundation to many cocktails.

Mel used Fidencio Mezcal this evening but she let me know the Mezcal they have in stock changes based on availability.

Along with the Mezcal the Friend of the Devil also had Fratelli Maraschino Liqueur, lime juice and green chartreuse. The drink was shaken with ice and then poured into a low glass. The glass was rimmed with a lime peel, then the lime peel was set into the glass.

This drink was green, green and more green.

The liquid itself was a beautiful light chartreuse color that had a ring of lighter-colored bubbles along the lip of the glass.

The cup it was served in could be described as a chalice. It was a decorative glass that was short and green. It was finished with a very dark green lime peel that was perfectly curled. This drink was presented perfectly.

As soon as Mel started walking over to me I could smell the smoky Mezcal; it has a very strong and unique scent, so it was no surprise that this was the first smell that hit.

I went in to take a sip and got a lot more of the sour from the lime. The smell of the sip was similar to a lime slushie. The large mouth of the glass allowed for the scent to really take up space.

This drink was absolutely amazing. The taste started off smoky. After the smoky flavor I got the sweet cherry flavor from the maraschino liqueur. The last flavor of the sip was the hit of the limey citrus.

Lime and Mezcal were the perfect pairing. The color of the green chartreuse brought the lime flavor forward.

However the Mezcal was the flavor left in my mouth and on my lips. This heavenly, smoky agave created a phonomone that I could only describe as Mezcal kisses.

This drink went down so smooth and it was so boozy!

It almost tasted like it had been a shot they expanded into a cocktail – a smart move on their part.
It was shaken with ice and then strained into the cup; this kept the drink cool but not watered down at all.

I ordered another Friend of the Devil so I could compare. This drink had been cooled a little more than the first, which brought out more of the lime flavor. As it warmed I could taste more and more of the Mezcal. It was equally delicious.

This drink has been on my mind since I tried it. It is a drink I could get accustomed to drinking on the regular. It was refreshing and left me feeling perfectly content. It was like a Margarita for serious drinkers.

While slowly drinking this heavenly green drink I was looking over the rest of their cocktail menu and mentioned to Mel how unique all the drinks looked. She told me the bartender who crafted the menu had been bartending most of her working life and had a passion for creating menus like this.

I hope to get back to The Ripple to taste more of their specialty cocktails. If you’re looking for a drink that tastes as good as it hits, I can fully recommend The Ripple Bar. The music was good, the atmosphere was popping, and the drinks really were state of the art.