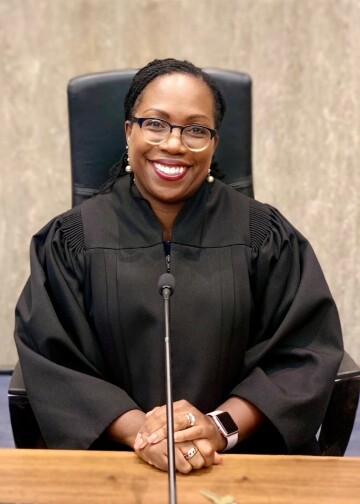 We have two victories in the struggle for justice and social progress to celebrate. I am referring to the confirmation of Judge Ketanji Brown Jackson to the Supreme Court and the enactment of the Emmett Till Anti-lynching Act.

Martin Luther King claimed the “arc of the moral universe is long but it bends toward justice.”
But too often it has been hard to find much evidence for his optimism. Reading the news is more likely to bend one toward drink, cynicism and misanthropy than hope for the future. As a society, we have a long way to go to achieve liberty and justice for all. But these two events are landmarks in the 400-year struggle for a better America.

Judge Jackson, speaking at her swearing-in ceremony at the White House, described the victory.
“It has taken 232 years and 115 prior appointments for a Black woman to be selected to serve on the Supreme Court of the United State. But we’ve made it – we’ve made it – all of us...We have come a long way toward perfecting our union.”

She went on to say, “In my family, it took just one generation to go from segregation to the Supreme Court of the United States. And it is an honor – the honor of a lifetime – for me to have this chance to join the Court, to promote the rule of law at the highest level, and to do my part to carry our shared project of democracy and equal justice under law forward, into the future.”

Judge Jackson is breaking glass ceilings in many categories. She is, of course, the first Black woman to serve on the Supreme Court. She is also the first Supreme Court Justice to have experience as a public defender, and the first since Justice Thurgood Marshall to bring significant criminal defense experience to the Court.

In addition, Jackson’s appointment marks the first time in the Court’s 233-year history that it will no longer have a majority of white men.

Unfortunately this does not mean the court will be more progressive. Justices Clarence Thomas and Amy Barrett are both conservatives. The good old boys still are in control.

There are other facts that are not “firsts” but tell volumes about justice in America.

Jackson was criticized as an “affirmative action” candidate. But Biden’s determination to appoint a Black woman was long overdue. Out of the 3,843 federal judges in our history only 70 – or 1.8% – have been black women.

This didn’t happen because Black women were not smart, experienced or qualified. It happened because they were not considered on an equal basis.

Judge Jackson is more qualified than many prior justices. Historically most Supreme Court justices, and many judges, have been selected for political reasons. The contrast between the qualifications of Judge Jackson and Justice Clarence Thomas at the time of his appointment is stark. The American Bar Association rated Jackson “well qualified” (its highest rating) but only gave Thomas a “qualified” rating (with some evaluators considering him unqualified). The NAACP opposed his appointment.

Another long overdue milestone for justice was achieved by the enactment of the Emmett Till Anti-lynching Act on March 29, 2022. The law makes lynching a federal hate crime.

Efforts to pass a federal lynching law have failed for more than a century – most recently in 2020. There were 200 attempts to make lynching a federal crime between 1882 and 1968.

Seven presidents, between 1890 and 1952, asked Congress for a law. But all these were defeated in the Senate by southern segregationist Democrats.
In 2005, a resolution passed by the Senate formally apologized for the failure to enact anti-lynching laws.

In 2018, the Senate unanimously passed Justice for Victims of Lynching Act but it died in the House. In 2020 the House passed the Emmett Till Anti-lynching Act by 410-4 but it failed in the Senate because of one senator.

We usually think of lynchings as being mob actions involving public hangings. The NAACP defines lynching to include any “extrajudicial racial terror killing and mutilation committed to uphold racial segregation and a false premise of racial hierarchy.”

Lynching of course, could be punished as murder under state law and federal law. But prosecuting mobs is difficult, murder is usually prosecuted in state courts, and local juries are often racist. So justice was frequently denied.

The NAACP has documented 4,743 lynchings between 1882 and 1968. But this number is certainly under counted and no one really knows how many people have been killed by racial and ethnic hate-motivated vigilantes. Blacks have been the vast majority but not the only victims of lynching.

Some claim the last documented lynching in America occurred in Mobile Alabama in 1981. But the killing of minorities and “others” continues today.

In recent years Blacks and gays have been dragged to death behind vehicles. Hate-motivated mass shootings have occurred in churches, stores, night clubs, work places, and even on military bases.

According to Jill Collen Jefferson, a lawyer and civil rights activist, there have been at least eight suspected lynchings of Black men and teenagers in Mississippi since 2000. These hangings were officially declared suicides. She has said, “...lynchings never stopped in the United States. Lynchings in Mississippi never stopped. The evil bastards just stopped taking photographs and passing them around like baseball cards.”

Surprisingly, given the partisan divides, the 2022 Emmett Till Anti-lynching Act passed the Senate unanimously and only had three Republicans oppose it in the House. The Senate confirmed Judge Jackson by a partisan 53 to 47 vote. Only three Republicans voted to confirm.

Judge Jackson will be an inspiration to women of color, women in general and the nation. The Emmett Till Anti-lynching Act is a huge milestone for justice.

So we should celebrate even if the arc of justice is moving slowly.