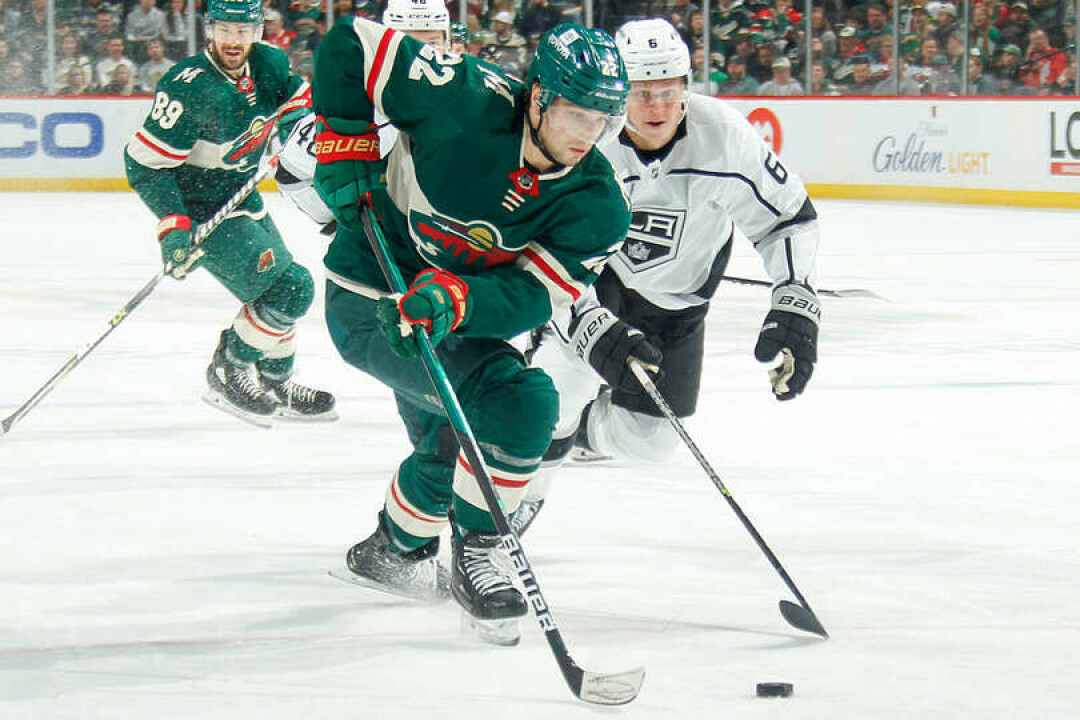 Kevin Fiala battles Olli Maata of the LA Kings in a 6-3 win.

ST. PAUL – It is here. The “stretch” run that will take us to the conclusion of the NHL regular season has begun.

The Minnesota WILD finished a tough week by defeating the LA Kings in a 6-3 tilt. But before the WILD could get home today to play in front of their own fans the team had to endure a couple of harsh road games. On Tuesday night the club started the back half of a four-game road trip. The first half of the trip was a great success in having had statement games against two of the eight Eastern Conference playoff teams. They throttled CAR 3-1 and then won in WAS the next night in a 5-1 domination.

This Tuesday past the team played at the NSH Predators and let’s just say that this one is better forgotten. The team succumbed on the scoreboard in a 6-2 letdown game. And there was more animosity in this game than I had imagined existed in the rivalry between these two.

I can see it from the Wilds side though. The Preds have dominated the WILD in the recent past, amassing a whopping 11-2 record extending back to New Year’s Eve of 2017. On Mikko Koivu sweater retirement night, the Preds recently embarrassed the WILD in their own barn. So I can see the WILD coming in with a bit of a snarl working.

It didn’t do much for the WILD though. There were three fights in the first and another in the second period. Of the four, I think the WILD may have won one of them; the other three may have been draws.

The downside is what this type of play does to your roster’s physical condition. In addition, D-man Matt Dumba lit up Mike McCarron with an open-ice hit on the half-a-foot taller, 45-lbs. heavier winger and Dumba hasn’t played since. From what I can tell it is a shoulder situation. He left the ice with a sagging right-wing and was in evident discomfort.

D-man Jon Merrill is still out, so suddenly matters aren’t so steady on the team’s backend.

I’ve said it before; I’ll repeat it; pick your battles carefully for the rest of the regular season. Something much more important lies ahead. Be tough and don’t back down. I understand. Just be smart about it for a couple of more weeks.

Overall this was a deflating type of loss. The team got smacked on the scoreboard and didn’t prevail in the physical end of the game either. The team looked to regroup on Friday night in STL.

Compared to the spanking the WILD got from the Blues in the Winter Classic the team played a much better game than they did on New Year’s night. They took a 3-1 lead early in the third frame only to cough it up in the middle of the period and then lose the game early in OT on a Robert Thomas score.
Thomas had earlier gifted Kirill Kaprizov a goal when he passed the puck right to him deep in his own team’s end. Kaprizov buried it quickly.

Jake Middleton scored right into the period and then the Blues took over. To put the road trip in perspective, the team earned five of eight points and paid the price for each one.

Against the LAK this afternoon I wasn’t sure what to expect. Veteran sports bettors would say to never bet on the home team in their first game back home and that’s what the WILD had this evening. In addition, the Kings are in a playoff position right now and desire to keep it.

Both teams have important players out injured. (LA = Doughty & Brown) (MN = Merrill & Dumba) To further add to the clouds of doubt I had circling overhead the Kings raced out to a 3-0 lead in the game’s first ten minutes. They had a SHG, an even-strength goal, and a PP tally to add insult to injury. All they needed was a penalty shot score and an empty netter to make the disaster complete for the WILD.

In a wonder of wonders scenario the WILD got the following six goals for the win. No one got beat up or maimed. There was a light heavyweight tilt between Brandon Duhaime and Brendan Lemieux that looked like a draw to me.

I don’t know if this was a dispute over French-Canadian name supremacy or what because both are Americans. Perhaps they just don’t like one another. It happens. That’s hockey.

For the calendar week the team went 1-1-0-1. The two losses were somewhat ugly (so was the win for that matter) and the club still has two crucial players on the shelf. Matt Boldy returned from injury today and got the team’s second goal.

For the rest of this month and thus, the regular season, the team will play 11 games in 19 days. They’ll be in St. Paul for seven of them. That is the only positive I can spot in the rest of this schedule. That’s better than a game every other day with six tilts against teams that currently have a spot in the tournament.

On the one hand you can say the team will be playing at a very high level in preparation for the tourney.

On the other hand you may have a strong case for locking up a spot in the playoffs as soon as possible so you aren’t exhausting your roster on the way there. This factor has plagued the club in the past and has contributed to its inability to get beyond the first round of the playoffs.

THIS YEAR, the WILD is 22-9 versus the Eas,t with one game left with them. They are 22-18 against the West with ten games remaining in the Conference. That’s 12-7 against the Pacific and 10-11 against the Central.

The 10 tilts left split evenly between the two divisions. Two of them are against the top two teams in the West. This week; vs. EDM @ DAL @ STL & vs. SJS.

But an omen of sorts appears when you consider that the WILD is only 3-9 against currently playoff-bound Central foes in what is known as “four-point” games. It’s when you meet an opponent who gets a two-point win against you that also keeps your team from gaining two points, and vice versa. It’s going to be an interesting three weeks folks. PEACE