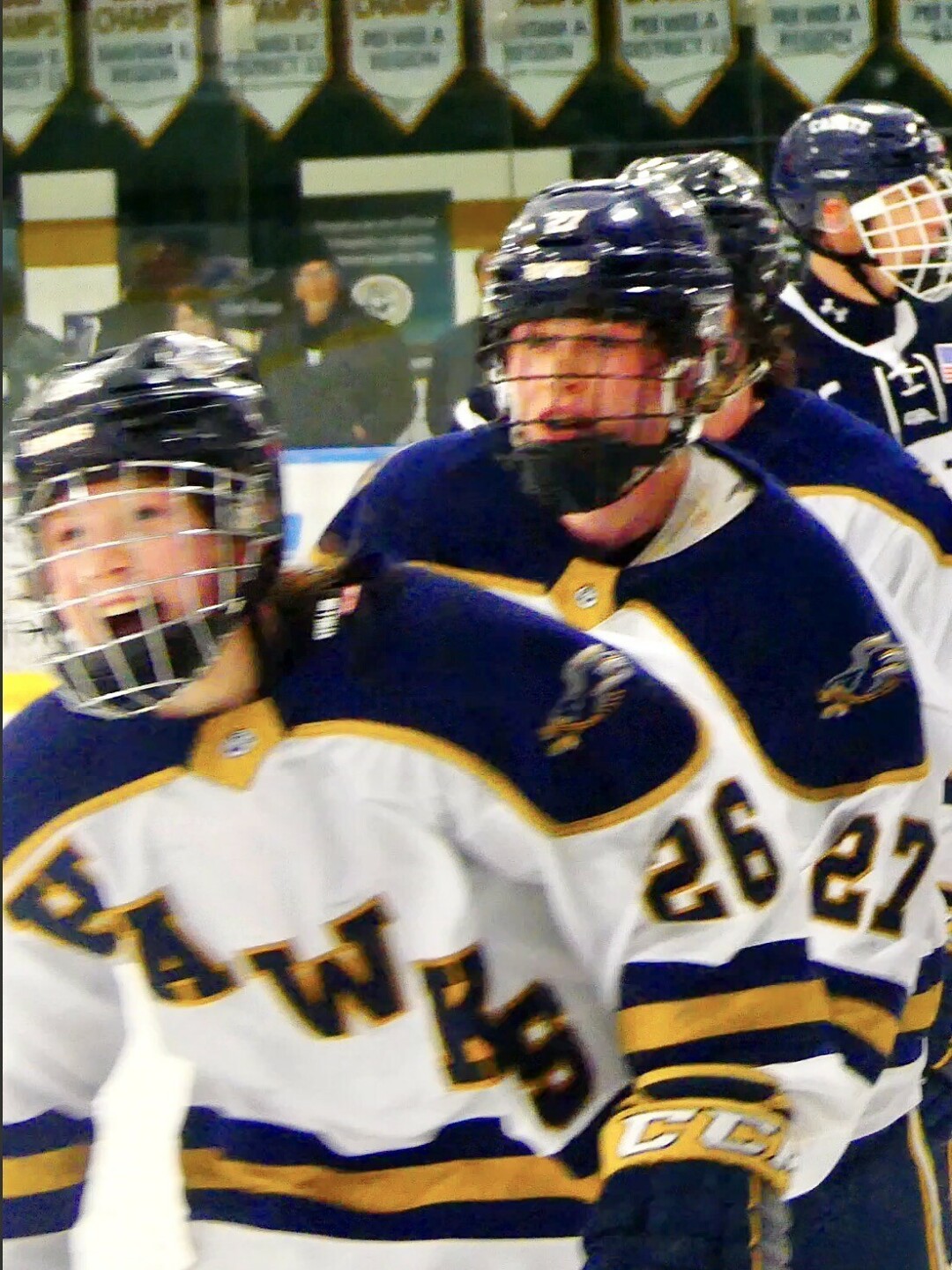 Sophomore Max Plante (26) led his brother, junior Zam Plante (27) after Hermantown scored a goal in a Section 7, Class A victory en route to the state Class A title. Photos by John Gilbert.

It was impossible for a Northern Minnesota hockey purist to lose while watching the NCAA Frozen Four last weekend. Those of us who missed UMD’s presence could cheer for either another NCHC team or another Minnesota team.

Some of us genuinely resented the Big Ten’s official hockey chairman declaring on the Big Ten Network after Michigan beat Minnesota for their league playoff that he would do all he could to support the “Big Ten continuing to dominate college hockey.”

Simply declaring such a thing doesn’t make it so, of course, and such disregard for the facts insults the rest of college hockey and does Big Ten teams a disservice.

The Big Ten is best known for igniting the destruction of the WCHA – the best men’s college hockey league in the nation – when it called for all the Big Ten teams to drop out of the WCHA and organize the new Big Ten hockey conference in order to give the Big Ten Network more programming.

The move fed the idea of North Dakota and Denver to pull together Nebraska Omaha, Western Michigan, Colorado College, Miami of Ohio, plus the later additions of UMD and St. Cloud State to form CHC as a truly elite eight-team conference.

The concept left Minnesota State Mankato and Bemidji State, along with historically strong Michigan Tech and Northern Michigan, to try to salvage whatever the remnants could provide as the WCHA.

So to say the Big Ten would “continue to dominate” college hockey was just another part of the ongoing marketing and promotional propaganda barrage of claiming superiority often enough that more and more fans might believe it.

In their supposed domination of college hockey, the total number of Big Ten teams who have won NCAA titles since the league was formed is: Zero.

The NCHC, after being formed seven years ago, won in the 2017 final, UMD captured back-to-back titles in 2018 and 2019, and the 2020 team that was the strongest of the decade was derailed from a third straight title run when the pandemic shut down and eliminated the 2020 NCAA tournament. Mass-Amherst won the 2021 title, breaking the streak of four straight trophies going to NCHC teams.

When this year’s Frozen Four arrived, it was put up or shut up time for the Big Ten, in all its arrogance. Michigan and Minnesota both had highly skilled teams, and both reached the Frozen Four, along with Denver, as NCHC standard bearer, and MSU Mankato from the remnant-based WCHA, which had been renamed CCHA.

Michigan somehow claimed the No. 1 overall seed, as the selection committee swallowed a large dose of Kool-Aid and fell for the Big Ten marketing and would face Denver in the first semifinal.
Minnesota, declaring itself the favorite, would face Mankato. Those who believed the hype conveniently forgot that Mankato had eliminated the Gophers 4-0 in the West Region final one year earlier.

My position is that the Big Ten records are artificially padded by the top teams beating up on the bottom three – Penn State, Michigan State and Wisconsin.

If true, Michigan and Minnesota would lose those semifinals; if not, the Gophers and Wolverines would both win and meet in the final, making gloating acceptable.

Denver defused Michigan’s explosive offense and beat the Wolverines 3-2 on Carter Savoie’s overtime goal in the first semifinal. The Gophers, with a chance at revenge for last year, and to offer evidence of the Big Ten’s “domination,” scored the first goal against Mankato, then the Mavericks took over the game and rolled to an embarrassingly one-sided 5-1 semifinal romp.

Two years, and two 4-goal Mankato victories against the Gophers proved the Mavericks validity.
In the final, Mankato was the definite underdog against Michigan.

Among the interesting factoids was that NHL scouts, who are also susceptible to the hype but often discuss and agree who is draft-worthy, had drafted 40 players who were in the four lineups: 14 Gophers, 13 from Michigan, including seven first-rounders, 12 Denver players, and one – count ‘em, 1 – player on the Mankato roster.

Mankato goaltender Dryden McKay won the Hobey Baker Award the day before the final, and for two periods, he was unbeatable.

Sam Morton’s power-play goal staked the Mavericks to a 1-0 lead, and it stayed 1-0 into the third period. But when the Pioneers broke through. Ryan Barrow’s goal came on a rebound, Denver followed up with a goal by Mike Benning for a 2-1 lead. Massimo Rizzo made it 3-1 at 13:34, and Brett Stapley and Cameron Wright both scored into an empty net to close out a stunning 5-1 victory for Denver.

A Mankato championship would have been both deserved and a colorful Cinderella story, but Denver winning proved once again the superiority of the NCHC, where every game is an intense, playoff-style struggle.

When the result turned out to be the latter, how could any of us lose? Except, perhaps, the Big Ten’s best, which have to go back to their private TV network and find new strategy to describe how they dominate college hockey. 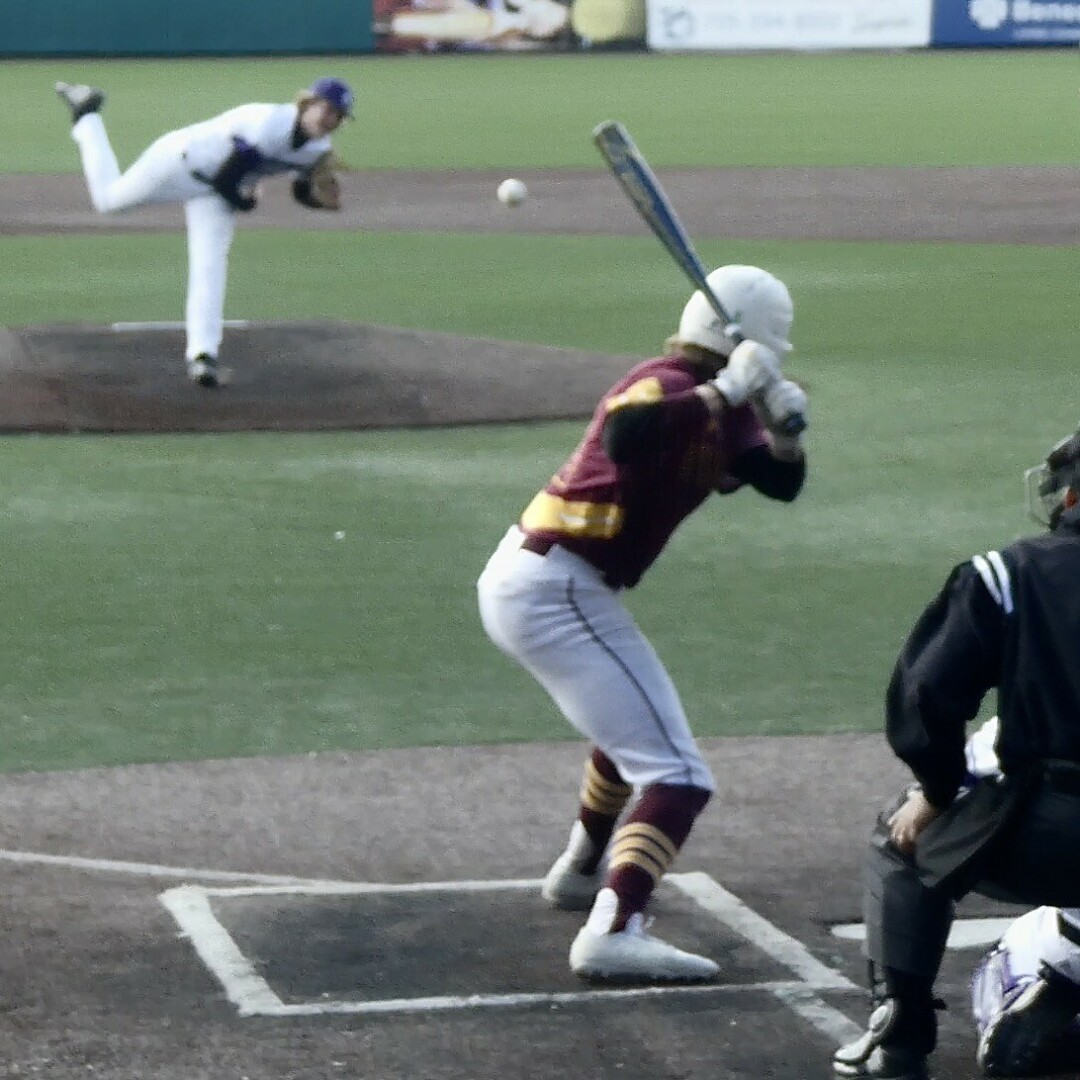 UMD outfielder Austin Gordon, waited for a pitch from Winona State's Dillon Whittaker Monday at Wade Stadium. Gordon went 2-for-3 as UMD came from a 4-0 deficit to win 5-4 in the first game, and take the second game 6-4 for a sweep.

At UMD, where the Bulldogs can look back and realize what a great year they had, including a 2-0 shutout of the same Denver Pioneers and another one against Western Michigan to win the Frozen Faceoff NCHC tournament, plus sweeping a home-and-home series against Minnesota, the transition to spring sports is well underway.

The last taste of hockey saw goaltender Ryan Fanti sign a pro contract with Edmonton, after Noah Cates signed with Philadelphia, and junior defenseman Connor Kelley is transferring to Providence, while another couple of players with remaining eligibility may also leave the program.

On Monday, springtime came to Wade Stadium, when the snow held off and temperature got up to 50, and the Bulldogs baseball team swept a doubleheader from Winona State.

They were tough, character-type victories. Winona took a 4-0 lead in the opener, but UMD rallied for three in the sixth to get to 4-3. And in the seventh, Brandt Kolpack led off with a single, and when Winona botched defend in a sacrifice, pinch-runner Ben Reilley came around and overslid third base. The Winona third baseman made a dive for him, but Reilley got his hand on the bag before the tag.

An intentional walk loaded the bases, but a strikeout left the Bulldogs with the bases loaded and two outs.

A sacrifice fly by Brodie Paulsen tied the game, which brought to the plate Alex Wattermann, who was having his biggest day as a Bulldog. Wattermann hit a single to right-center, driving in the winning run for a 5-4 victory.

In the second game, Wattermann continued his hot hand, winding up with four hits for the sweep, and finishing off a 6-4 victory in the second game by pitching his fourth save of the season.

Last Sunday, the Twins averted a go-ahead run by Seattle when Jesse Winker tried to score from first on Mitch Haniger’s double to right center, but Alex Kirilloff threw to shortstop Carlos Correa, who spun and fired a strike to the plate, where Gary Sanchez put hte tag on Winker to snuff the threat. In the last of the first, Byron Buxton homered to lead off, and later in the inning Sanchez hit a grand slam for a 5-0 lead.

In the second, Buxton hit another home run, and in the third, Max Kepler homered, followed by a Jorge Polanco 2-run homer in the fourth, and a Correa homer in the sixth. Six home runs for a 10-4 triumph.
On Monday, four hard-earned runs while Dylan Bundy threw five innings of 1-hit ball, and the Twins won 4-0.

Over at Xcel Energy Center, Sunday night, the Wild continued to play exceptional hockey – the kind of hockey that makes Minnesota hockey fans hold their breath, hoping they are not being misled.

When a strong Los Angeles Kings outfit rolled in and fired three of their first five shots past Marc-Andre Fleury for a 3-0 lead in the first 10 minutes, I looked for a goalie change. But instead, the Wild stormed back for goals by Kirill Kaprizov and Matt Boldy 50 seconds apart before the first period ended.

Jared Spurgeon, Mike Zuccarello and Matt Foligno scored in the second period, and Nick Bjugstad whacked in an unlikely rebound in the third period for a 6-3 comeback victory.
Maybe hockey season isn’t quite done yet, folks!

Max Plante, who helped Hermantown win the state Class A hockey tournament as a sophomore in March, will leave the Hawks to join the U.S. National Development hockey program in Ann Arbor, Mich.

The younger of the two Plante brothers on the championship team was named to the Under 17 select team, and is scheduled to also play on the Under 18 team a year from now, while his brother, Zam, who will be a Mr. Hockey favorite as a senior, trying to lead the Hawks to a second straight title.

“I’ve never seen anyone who loves the game as much as Max,” said Hermantown coach Pat Andrews, who will miss coaching the two mercurial line mates. “He’s just always so exuberant about playing. He was so excited to play in the state final he went to bed at 8 o’clock the night before. He’s been up-front with me all the time, and I knew he had a great tryout just after the state tournament, so it doesn’t surprise me he was picked.”