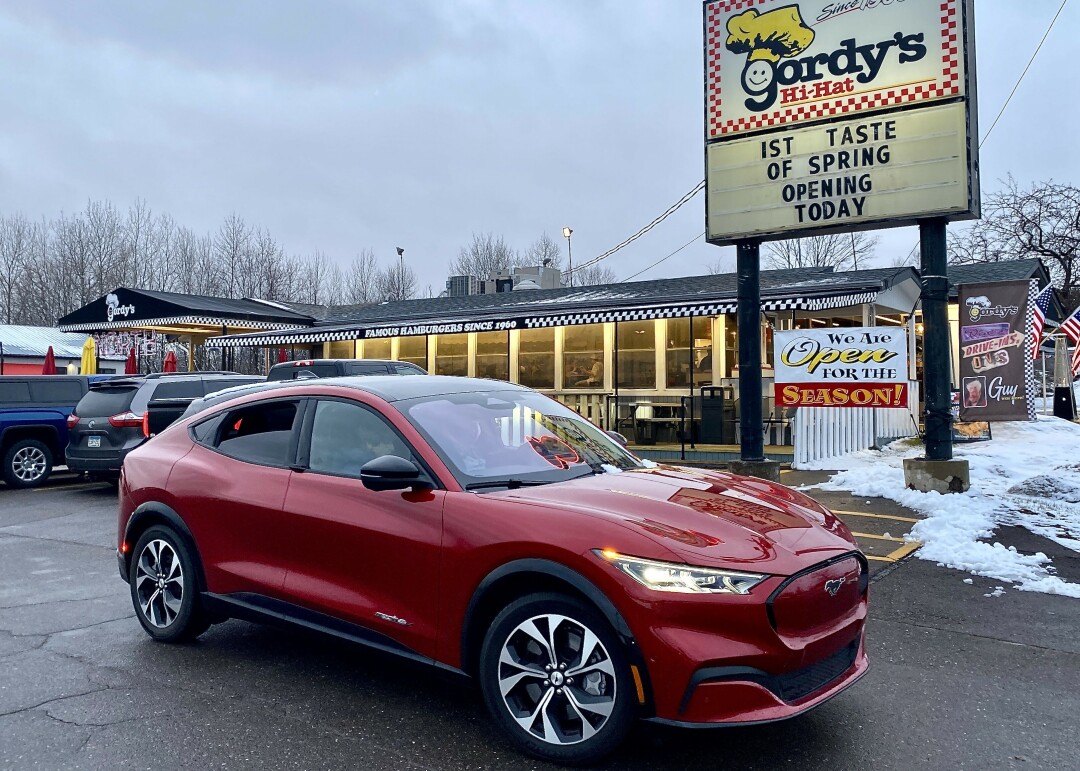 Mustang Mach-E, pure-electric vehicle in SUV category, visited Gordy’s on the day of its seasonal opening. Photos by John Gilbert.

With only a few days remaining before Easter, there is just barely time to get to Virginia, Minn., for a stop at Canelake Candy Shop, where, I guarantee Easter bunnies of all shape and gender, you will find the best idea in candy Easter eggs for children of all ages.

That, and the chance for another test-drive, were the reasons we headed from Duluth to Virginia.

The test-drive this particular week was the new Ford Mustang Mach-E – a pure, Ford-built EV that can perform with or better than virtually every other EV on the market, and it looks remarkably mainstream.

Before we get hung up on automotive details, it was our luck to also drive the Mustang Mach-E from Duluth to Cloquet on the day of the new season’s grand opening of Gordy’s Hi-Hat drive-in, the indisputable best drive-in restaurant in the universe. Besides, Gordy’s is sort of on the way to Virginia, as well.

At Canelake’s, a third-generation store specializing in homemade candies that are, truly, mind-blowing for purity and taste, we were lured by the temptation of the Easter egg delicacies, and we loaded up on these phenomenal dark chocolate eggs, filled with maple walnut, coconut, pina colada, orange, strawberry, chocolate, tutti-frutti,vanilla and various other stuff.

This year, Pamela Canelake Matson and Dennis Matson, her husband, are making the normal egg-sized eggs, and also much larger eggs with the same filling. I asked Pamela why she doesn’t fill those eggs with her own, homemade caramel. She said they were too big.

I debated that with her, simply because, to pure dark-chocolate and caramel lovers like I am, too big might be just about big enough. She then made some smaller-than-usual dark chocolate eggs filled with her caramel, and I assure you, they prove that I win the debate. They are the best ideas ever for Easter eggs that are, frankly, too good to be used up as hidden gems for kids.

We may not be in total agreement on candy, just as we don’t always have to agree with Ford, and not all of its “better ideas” are indeed better ideas. But the Mustang Mach-E is right up there among the best of the better ideas out of Dearborn in several decades.

My guess is that Ford was caught in its own cross-hairs. The company announced it wouldn’t be building any more cars other than the Mustang a couple of years ago, so it had to squeeze the subcompact EcoSport in among its SUVs.

Next up was the move to electric vehicles, so Ford decided to build a pure electric, from the ground up, and rather than give it its own identity, Ford decided to call it a Mustang.

That led me to a few sarcastic remarks, suggesting Ford could continue to build the Taurus and the Fusion and the Escort, also, just call all of them models of the Mustang.

We probably shouldn’t suggest such ideas.

At any rate, the Mustang Mach-E comes in one body style, a fastback 4-door compact sedan – except that Ford is insisting it be classified as an SUV.

My tester was a Rapid Red Metallic 4X Premium AWD model, and it came to me by trailer from the press fleet service in Chicago.

At first glance, the closed-in grille catches your eye, because there really is no normal air intake in the grille. Fully charged, the vehicle showed a 270-mile range, and instruments on the gauge package keep you posted of remaining range, and what percentage of full-power you have remaining.

It is that “range anxiety” that causes potential buyers to be reluctant, because it certainly is not in the driving. The vehicle takes off swiftly, and silently, although you can switch a setting on the large center-dash panel screen to introduce a couple of piped-in sounds to alert pedestrians that something is coming, and perhaps because occupants might feel uneasy at the eerie silence.

The interior is roomy for four, or five, with comfortable front buckets, although rear-seat headroom is compromised a bit by the slope of the rear roofline. You engage drive by turning a rotary dial on the dash, and with only a one-speed.

The power of the basic Mustang Mach-E is 290 horsepower and 317 foot-pounds of torque, while the 4X Premium improves on those impressive figures to deliver 324 horsepower and 428 foot-pounds, with separate batteries driving the two electric motors, fore and aft.

Power is smoothly delivered through the one-speed automatic, and you appreciate the silent force available at the tap of your toe. Steering is precise and adds to the feeling of overall safety.

There are a couple of things we’d want to check on if we were considering a purchase. There are charging devices spreading rapidly through the Twin Cities of Minneapolis and St. Paul, but the spread is a little slower away from the big metro areas.

Duluth, for example, has a couple of sites with chargers, and you can buy a charging station to have a high-power unit at your disposal. Otherwise, the smaller battery takes a long time to charge on normal household electricity, and the 4X Premium takes longer.

We learned right about the time the car was delivered that a company called ChargePoint that is building charging stations all around the country has been accused of excessive charging – for money, not electricity – so Ford, Hyundai, and a couple of other companies have broken off their arrangements with ChargePoint. We were assured we could still use their chargers, however.

After paying only casual attention to the remaining range, we made our short trips, and we enjoyed opening day at Gordy’s, celebrating with burgers, fish ’n’ chips and a pineapple milk shake, we noticed the range was dwindling. So we hit the two charging locations in Duluth that I know of, and learned that you have to have a specific ChargePoint card, which I don’t have, to get any electricity out of its plug-in hook up.

I contacted a Ford dealership in Two Harbors, and a salesman said they do have a charger, but he would have to ask his manager, who would call me back within the hour. Two weeks later, I haven’t gotten a call.

We plugged into our garage household electrical outlet and left the Mustang Mach-E charging overnight, and for a total of about 10 hours, and it said our new range would be 65 miles. Not much return, for the time spent, I thought.

I gave a call to NorthStar Ford, and a very accommodating service manager named Kaylee arranged for me to drive up and use their quick-charging unit. I did that, and we left the car there for four hours, until the Saturday 6 pm service closing time.

When I first got in, I was dismayed to see that it showed only “46” on the dash. Then I noticed that was percentage of charge recaptured, and it was closer to 77 miles of range.

We greatly appreciated the convenience and accommodating nature of Kaylee and her associates at NorthStar Ford, and we’re guessing Ford will work out a better arrangement with some other aftermarket quick-charge company for its customers.

The number of EVs on the market are growing, virtually by the month. I’ve driven several, from Hyundai, Kia, BMW, Volkswagen, and Tesla. Some are built onto existing platforms, some are on unique new platforms.

The Mustang Mach-E was built all as one, on a new platform, and the tester listed at $56,200. There are government offers available to offset that initial cost, but it’s still not bad, when you consider never again having to pay for gasoline, which has dropped down to less than $4 per gallon for now, but we don’t know for how long.

The “better idea” from Ford works, at $56,200, even if it does not include the stop at Gordy’s or the carful of Easter eggs at Canelake’s in Virginia. Come to think of it, the Mustang Mach-E does resemble a bright red easter egg.