Miranda was half right 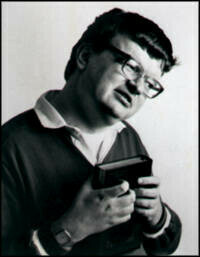 Kim Peek, who has the Savant Syndrome, was the model for Dustin Hoffman’s character in Rain Man.

Zebras are half black and half of humans are above average

In Shakespeare’s play The Tempest, Prospero’s daughter Miranda has been sheltered much of her life. After a storm maroons them on an island, she is exposed to some of the residents. In her naivety concerning humans, she exclaims, “Oh, wonder! How many goodly creatures are there here! How beauteous mankind is! O brave new world,  that has such people in it!”

Her father, who has seen many goodly and ungodly humans, responds with a negative grunt. Prosper has dealt with good and evil geniuses and morons for much of his life. As an example of a moronic human, his slave Caliban trys to rape Miranda later. He was not “goodly.”

Although we use the IQ Score Bell Curve to describe the intelligence, or lack thereof, of the human, we still lack knowledge of what our brain can do. We do know that any moron or genius is capable of doing good or committing evil.

Also, the human keeps discovering things, raising the relative intelligence of everyone.

We have a lot of work to do in determining the capabilities of that three-pound mass – or mess.

We have humans who don’t fit on the IQ chart. Vaughn Smith is a carpet cleaner in Washington, D.C., who speaks eight languages fluently, knows 37 more, and he can carry on a lengthy conversation in 24 of the 37. He can read and write in eight alphabets – and tell stories in Italian, Finnish and American Sign Language. He is currently learning Salish, a Montana Indian language.

He is a “beauteous” human savant, a very learned person in only two areas, languages and carpet cleaning. We used to call them idiot savants until we got more manners and called them victims of the Savant Syndrome.

Savants are beyond ‘goodly’ and ‘beauteous’ and out of our world – so far!

Darold Treffert has studied the work of savants in his informative and – in a way – frightening book Islands of Genius – The Beautiful Mind of the Autistic, Acquired, and Sudden Savant.

His work, published in 2010, covers 122 years worth of work by savants. This is the frequency of the five top savant subjects in order: calendar calculating, music, mathematical and number skills, and mechanical/ spatial skills.

There was the savant who flew over London without a camera, returned to earth and made an accurate map, including buildings, of streets.

There was the savant son of a concert pianist (who had never played the piano) who listened to his mother play a long Chopin concerto. When she left the room to get coffee, he climbed on the bench and played the concerto beautifully.

This is scary stuff. I have to cover a couple from the book.

Blind Tom, the son of a slave sold in 1849 who had produced 12 product-children for her owner, was given free to her new owner because he was blind and worth nothing on the slave market. At five years old he did not speak, could hardly walk, and showed little intelligence – except for music. The slave owner’s daughters played the piano and Tom listened. He soon climbed on the bench and played beautiful tunes.

Blind Tom turned out to be a musical genius of international fame. He played at the White House when he was 11 and went on a world tour at 16.

Daniel Tammat is a numbers savant. March 14 is celebrated as National Pi Day. Remember 3.14 from math class? When he was 25 he gained the attention of the world by reciting Pi from memory to 22,514 decimal places. It took him more than five hours! It’s unbelievable!

He has many number skills. Ask him to calculate 37 to the power of four he will instantly give you the answer: 1,874,161.

Read the book Islands of Genius. The Savant Syndrome and the thousands who have this “handicap” will amaze you.

Do animals also have Savant Syndrome?

A golden retriever was recently hired by an Orlando hospital as a care and service dog. Parks sits, stays and raises his paws on command, pushes objects, turns lights on and off, pulls ropes to hold drawers and doors open, retrieves items when told and pulls the clothes hamper over to the washing machine. He also plays cards, barks on command and cuddles with kids and adults when asked.

He also insists that a child walk with him in the halls for exercise. Parks was not a cheap dog. His education ran $50,000. On the DOG IQ he must be in the genius range – or he is a savant? Some day we might know.

A general said The Chosen One was a “moron.” He self-describes as a “genius.” Where would he fall on the IQ chart?

Lawrence Ray, a 62-year-old doctor trained in Ivy League universities, is being charged in a Manhattan, New York, district court with racketeering, sex trafficking, money laundering and a number of other charges. At one time he allegedly beat his younger brother with a hammer and had held a blade to his throat. He forced several young women into prostitution and lived off their earnings – among other violations. He corrupted the lives of other young people with maniacal rituals.

Here is  “Homo Horribilis.” Did the bad doctor show his IQ scores when applying to the likes of Harvard or Yale? Where would he fall on the IQ chart?

A religious North Carolina dog owner thought his dog was gay, so, as he was anti-gay, he dumped the dog at an animal shelter. A same-sex couple adopted the dog and he is now a happy dog.

I guess the original dog owner didn’t know the top 1,500 species on earth were not straight. Where would the gay dog hater fall on the IQ chart?

Snake-handling Pentacostals in Tennessee do their clog dancing to hymns as they wrap poisonous snakes around their necks – while speaking in tongues, taking chances on whether living that Bible verse will get them to Heaven. Some snakes don’t like to be “handled,” so they send their worshipper to Heaven or to Hell early.

Pastor Greg Locke, another Tennessee White Christian, has decided to fight the demons that possess many people. His preaching against the Devil puts sinners into trances while they growl like animals, moan and pray in intelligible tongues. The worshippers writhe in pain and wave their hands in the air.

A few are in such a spell they retch into silver vomit buckets placed strategically around the tent where he holds his services. Here are just a few of the lines he uses in revealing demons possessing his worshippers:

“Devil, your foot soldiers are coming out tonight…We will expel them. You gotta leave, Devil! Every spirit of homosexuality, lesbianism, come out!”

“If you have had the COVID-19 shot, I’m telling you you’ve got poison in your veins! We call out the COVID-19 vaccine out night now. Keep that demon spirit out of you right now in the name of Jesus! I love you enough to make sure I’m hated for telling the truth.”

On Jan. 6 in Washington: “I declare unto you that President Donald Trump is gonna stay for four more years in the White House. We’re a mighty army. They’ve gotta listen. They can’t ignore us. Our churches have been backed into a corner.”

Locke, head of the Global Vision Bible Church, has millions of followers who believe patriotism and love for America are directly tied to White evangelical Christianity. He gained international attention by fighting mask mandates and calling the virus a “fake pandemic.”

He and many pastors appear at Trump rallies and preach that the 2020 election was truly stolen. Locke recently sponsored a book burning near Nashville where followers tossed Harry Potter, Twilight,and thousands of Disney books into a huge bonfire because demons and witches wrote them to give people the idea the Devil is a good guy.

The Proud Boys, an extremist militia known to have brought weapons to Washington on Jan. 6 to defend Trump in the White House, often provide security at events sponsored by Locke.

As a teen, Locke was arrested five times for theft, reckless endangerment and breaking and entering. Where does Locke fall on the IQ chart?

Arkansas candidate: Christ’s country is where you can buy beer and a shotgun at the local grocery store

In the 2020 presidential election Biden received 81.2 million votes, Trump 74.2 million. But more than 85 million eligible and registered voters did not vote.

Will teaching critical race theory or dumping it in the historical shredder make much difference? Will lowering the economic inequality between rich and poor make a difference?

The big question for the 2022 congressional elections and the 2024 presidential elections is: Will higher education and above-average intelligence make much difference?

Looking at the major issues listed above, I doubt if education and intelligence will muster many votes. I am sure religion, abortion, homosexuality, guns, public education, climate control and the economy will be the main issues.

If we lift the average IQ a few points by improving education, we might win the battle between democracy and authoritarianism. But Thomas Nightingale of Scottsville, Ky., drives 80 miles every Sunday to hear Pastor Locke’s sermons about demons, and thousands attend Trump rallies in red states or enclaves where the truth is never spoken.

Hannah Arendt in the Human Condition writes: “If everybody always lies to you, the consequence is not that you believe the lies, but rather that nobody believes anything any longer.”

Nothing good happens when we have morons looking for litter boxes in  public schools.