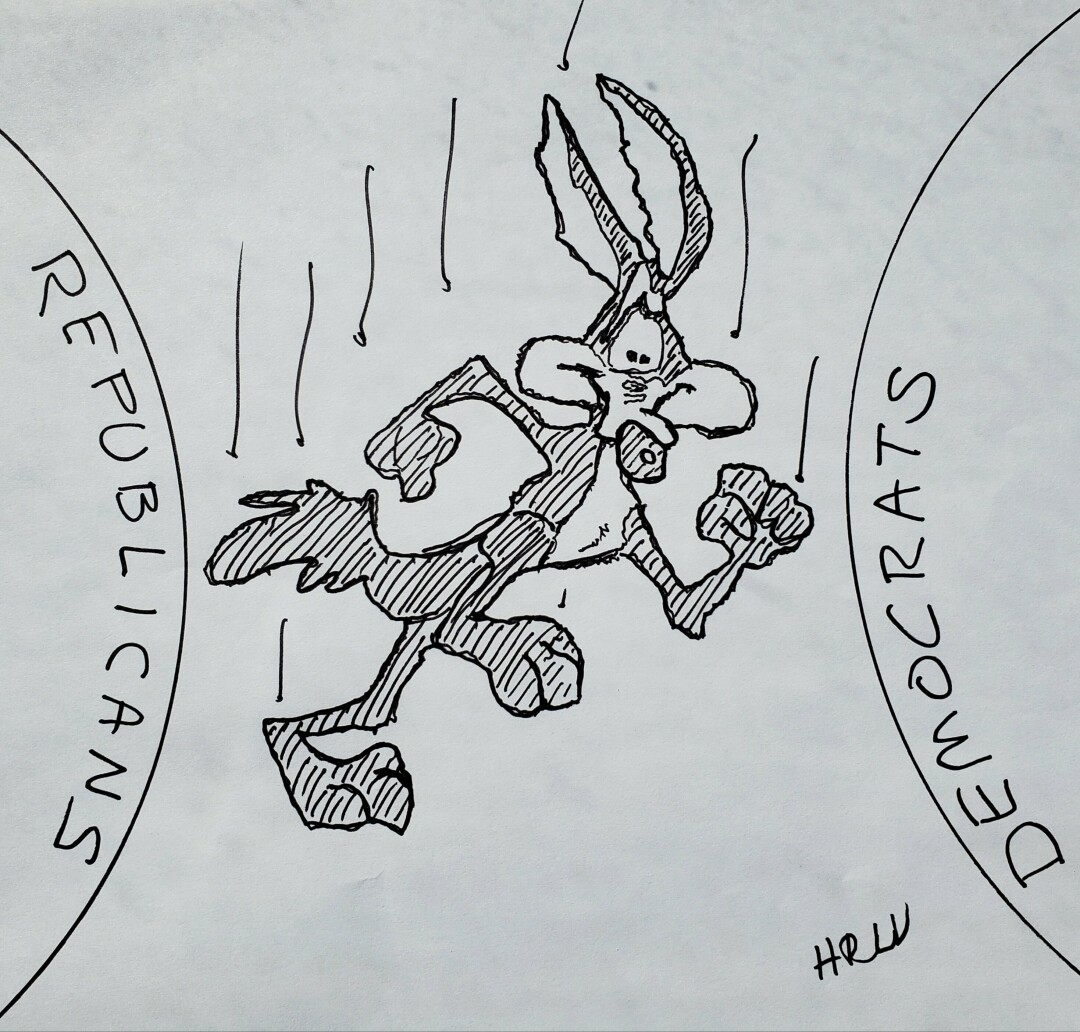 Last week I wrote nostalgically about my old buddies at a Republican convention. Now I must “…put away childish things.”

Political parties stand for ideals. For Lincoln it was the Union. For Teddy Roosevelt it was the Square Deal. For Richard Nixon it was the Silent Majority.

Parties spell them out in their platforms. Until Donald Trump ran for re-election, no political party had ever run without one. President Trump did not want one in 2020 and he got what he wanted. Whatever escaped Trump’s mouth or Twitter account became that minute’s Republican Party platform.

Republicans are back to writing them again but they don’t resemble the ones I remember from my first precinct caucuses where resolutions were argued like Supreme Court cases.

Our convention met in the Radisson Hotel’s tiny Viking room, where I once spoke to Duluth’s Atheists.

Our 50 delegates were a fraction of the size of the DFL convention I spoke at the year Trump was inaugurated. Between speeches from candidates and our party reorganization we would vote on 32 resolutions that had been passed up from precinct caucuses.

Our first resolution insisted that voting machines had been hacked in the 2020 election and called for paper ballots. I chose not to argue the unpopular idea that our election had been fair. I confessed my silence privately by writing “I said nothing” next to the word “passed.”

I would write this over and over again through the convention.

The second resolution was to outlaw teaching “Critical Race Theory.” Children could no longer be traumatized by learning that America’s minorities had once endured long year’s of mistreatment.

The third resolution proudly proclaimed that the Republicans are “the America First party.” Left unmentioned was the fact that Republicans treated the real “America First Party” as though it was a rabid dog during the Second World War. It didn’t help that the Firsters nominated the Republican Vice Presidential candidate, John Bricker, as the Firster’s VP candidate in 1944 without asking permission.

I thought the best vote of the convention was the defeat of a resolution calling for the horse deworming medicine, Invermectin, to be sold over the counter. However, it only failed because a doctor speaking against it said that while it was a perfectly good medicine it posed a threat to pregnant women.

A resolution opposing governmental interference with “Biblical” preaching didn’t include protections for preaching the Koran or the Torah. It clearly defied the First Amendment’s prohibition against the establishment of a religion.

Resolutions against masks and vaccine mandates passed easily. No one pointed out that the resolution opposing medical “coercion” in favor of “bodily autonomy” might be used to protect Texas women seeking abortions.

When we debated a resolution supporting parents’ rights to determine their minor children’s upbringing, education and health care I did ask about the Texas law making it a crime for parents to medically treat their trans children for gender dysphoria. I didn’t raise an eyebrow. It passed.

After the convention I told one of my buddies that there ought to be a place for trans people in the world.

I mentioned one had helped me design a Facebook page for my last school board campaign. I was taken aback with his vehement complaint that such selfish non-women were undermining Title 9 and the 40-year fight for women’s rights.

Missing from GOP conventions are the centrists who could once be counted on to debate ill- thought resolutions. That was before the Party of Lincoln purged it’s RINO’s. The liberal Lincoln would not survive the scourge. Today he’s a Whig again.

Minnesota will have a platform at the end of the day. On the way to the state convention sophisticated law makers and attorneys will iron out the most glaring faults.

But I remember my first Republican caucuses in 1972 during the height of the Vietnam war. There was robust debate. That was before Fox News played on Russian state television.

In school I was taught to see America’s two eternal political parties like a business major’s Ven diagram with overlapping circles. One circle represented Republicans the other Democrats. In the middle where they overlapped was a third of the voting population. These independents voted for the best candidates of each party and kept the parties from playing to the “lunatic fringe”that Teddy Roosevelt complained about.

My generation scorned parties that fought to control the center and called them “Tweedledum and Tweedledee.” We ended up getting what we wanted and today 65% of Americans fear for the survival of our Democracy.

There is no one more pathetic than the GOP’s presidential candidates that Donald Trump cut off at the knees. Ted Cruz has been reduced to brown-nosing the man who called his wife ugly on national television and who accused his Dad of assassinating John Kennedy. These men panicked with the rest of the nation on Jan. 6, 2001 but have since developed an acute case of amnesia.

Picture them, like Wile E. Coyote, racing after Road Runner, only to find themselves standing over the empty divide between two great circles that no longer touch.