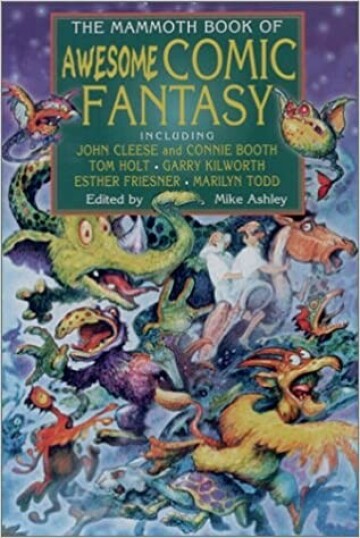 The Awesome Comic Fantasy Collection starts with a story by John Cleese and Connie Booth called “Happy Valley.” It was performed as a sketch on Monty Python, and I think Michael Palin played the Happy Valley King Otto. The King is required to ask the Prince a question penetratingly, and Michael was the expert at asking questions penetratingly,  which was accompanied by the old fish eye.

It is called Happy Valley because a law had been passed that made being negative illegal, so they executed all the malcontents and Trade Unionists.

One man was heard to moan softly after his wife died, which violated the Happy Noises Act. He was sentenced to hang by the neck until he cheered up.

The King was a merry old soul, and he played strange songs on his Hammond organ high up in the castle, where he lived with his Queen Syllabub and their lovely daughter Mitzi Gaynor. Mitzi is described as a girl with fabulous tits and a set of highly polished wooden teeth. She loved her teeth, and would varnish them after every meal.

She also loved her dog Hermann, who had died, but she was so young and innocent nobody wanted to explain it to her, and therefore she knew nothing about death. She could be seen every morning taking Hermann for a pull around the Royal Gardens.

One morning she spotted a handsome man and fell head over heels for him, so looked him up in the “Observer’s Book of Princes,” and sure enough, he was there! So she went up to Prince Kevin and introduced herself and the subject of marriage, and within a fortnight, they were off to see the King.

“Is he in the Book?” the King asked.
“Oh yes, daddy!” said Mitzi,
And here comes the penetratingly asked question: “Do you want to marry my daughter?”
“Yes, I do.” said Prince Kevin.
“Good,” said the King. “In that case, I must give you a task to prove you are worthy of my daughter’s hand. Tomorrow, you must go to the tallest tower of the castle, and jump out the window with nothing but your sword.”

So the next day, the Prince jumped out the window, and fell 300 feet to his death. The good news: the sword survived with just a scratch.

“Can we get married now, Daddy?” asked Mitzi.
“Sadly not,” said the King. “He did not prove worthy of you.”
“Does that mean he has to go in the ground next to the others?” Mitzi asked.

So Prince Kevin’s coffin was laid to rest on the traditional black-edged Whoopie Cushion alongside those of Princes Oswald, Robin, Norbert and Malcolm.

As someone who remembers the real Mitzi Gaynor, I can’t say I paid much attention to her teeth, but she did have fabulous tits as well as some pretty good legs. In the early ‘60s, she had a one-woman show on TV in which she danced very energetically in an abbreviated costume, As she stood there after the dance – all sweaty, breathing hard and taking bows, she made a young man’s fancy turn to lust.

“Broadway Barbarian” by Cherith Baldry. I have not met this doll, but the writing style, which is decidedly Runyonesque, brings me great joy. I feel that I have previously met Harry the Horse, Spanish John and Little Isadore, three gentlemen who do not bring great joy to anyone except their bookie. In this case, they are attempting to do a good deed, although they are hoping it will be compensated.

The man whose life they are trying to brighten up is Eugene Edmonton, a man in a very good tuxedo that they discover crying in his beer and threatening to scrag himself over the love of one Paulette Patrick, a dancer at Miss Missouri Martin’s Sixteen Hundred Club. Harry the Horse. Spanish John and Little Isadore do not wish to be present if he scrags himself, because the cops will think that they did the scragging.

Miss Patrick has refused the diamond bracelet and fur wrap which Eugene sent her, telling him that she did not desire diamonds or furs, but she wanted a knight in shining armor.

We are sitting at Good Time Charley’s when the door flies open, and a giant of a man stands there. He is wearing a small fur apron, hairy boots, and a leather belt with a sword in it.

He slams his fist on the bar and says “Give Thurg drink!” Charley gives him two bottles of Scotch which Moonshine Joe Brady makes in his basement. Thurg bites the top off the bottles and drinks them down.

Then he asks “Where Thurg find Eye of God ruby?”  Eugene sees his chance to do a heroic deed, so he says “I do not know where the ruby is, but I will help you find it.” Then, since Miss Patrick has to see him being heroic, he says “We will go to the Sixteen Hundred club.”

There is a horse-drawn cab in front, which we take to see Miss Paulette’s dance. She is a tall, very healthy girl with a costume consisting of a few feathers and a small fan. Thurg says “This Thurg’s woman, throws her over his shoulder and carries her out screaming. He cuts the lines on the horse with his sword, and gallops away.

We jump in another cab and Eugene says”Follow that horse!” We have no hope of catching him, but we do. He is standing by Rosenberg’s Jewelry. He points and says “Is Eye of God.” There is one large ruby on a pillow. Thurg hands Miss Patrick to Eugene, and breaks the window. Miss Patrick is saying “Oh, Eugene, I no longer wish a hero. You can buy me all the jewelry and furs you want.

I am standing with Harry the Horse, Spanish John and Little Isadore, in front of a broken jewelry store window, with alarms going off, and the cops  on the way.

“The Byrds” by Michael Coney. No, this is not about the musical group, or my sister-in-law would be reading it.

I suppose it was the inventor of the anti-gravity belt who  was ultimately responsible for Gran getting hold of one, but its owner has to bear some responsibility too. Everyone knew she was as crazy as a bedbug, even though Mother wouldn’t admit it  Gran stripped nude, and painted her body black, with red circles around her eyes, cheeks, chin and throat. Then she flew to the nearest tree and perched. She informed everyone that she was now a Rufous-necked Hornbill, and then, since the Hornbill was not a talking bird, she stopped talking.

Gramps thinks she will come down when she gets hungry, but at dusk, she flies to an apple tree and starts eating.

The next day. Gramps strips off his clothes and paints himself up. “She’s more likely to listen to one of her own kind,” he says, and flies up next to her in the tree. He talks to her for a while, and she makes gobbling noises and lays her head on his shoulder. Soon. Gran and Gramps are engaging  in mutual grooming.

The news agencies showed up as well as crowds of people. With all the publicity, they were soon joined by a group of young people painted black. They were called the Crows, and they were joined by Pigeons and Pelicans. It was a fad that fed on itself. It was only a matter of time before they began building nests. The media started calling people who adopted the lifestyle the Byrds.