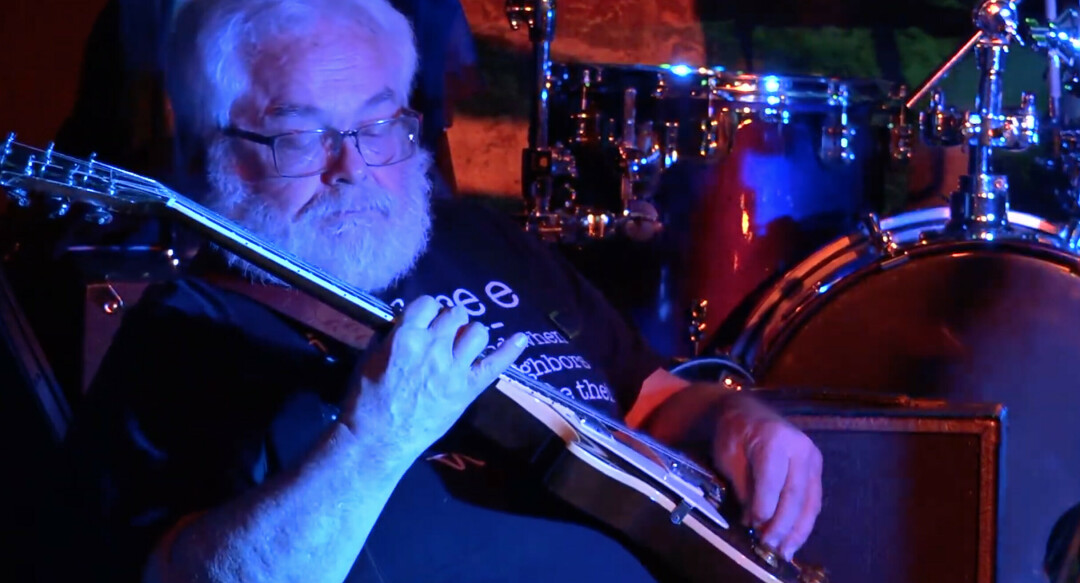 Ron Koivisto performs with the Maxi Childs Trio during the March 27 Concert for Remembrance of the late Mark Anderson at R. T. Quinlan’s.

Two local convocations of musicians that happened recently are worthy of note. The Concert for Remembrance of the late Mark Anderson at R.T. Quinlan’s in Duluth on Sunday, March 27, and the “Doctors Without Borders” benefit for Ukraine on Wednesday, March 30, at the Cedar Lounge in Superior.

During the course of eight hours, nine accomplished musicians who had played with Anderson honored him with heartfelt, full set performances. Their accolades for his guitar artistry and humanity were cheered. And, as they shared memories of Mark, a joyous spirit seemed to fill the space, abetted no doubt by the libations on hand.

A mid-afternoon break for a video of Mark Anderson showcased not only his talent but other facets of his remarkable life. And a display of photos from Mark’s life generated shared stories and remembrances that reinforced the memorial aspect of the gathering.

Alfredo Santana, a dapper “skins” (congas and bongos) player who flew in from New York for the occasion joined several of the bands, adding a soulful rhythm to the proceedings. His remarks about Mark being a true friend indeed and “brother” was a testament to the high regard held for him.

Mark’s good friends and jazz musicians Mary Lou Williams, Jane Aleckson and Jeff Peabody came together to perform numbers that recalled and celebrated Mark’s mastery of the genre, while the Maxi Childs Trio continued the jazz mode. Its rendition of “Somewhere Over the Rainbow” was a poignant moment among the range of musical styles offered.

Virgil Caine raised the energy to the next level with rocking numbers and Mark Hawley’s throbbing blues harp. Then it was back to jazz with sets by The Jane Gang and John Farrell. The Fractals, with surfing licks and pedal steel guitar, rounded out the evening of music, memories and high spirits.

It was a dynamite concert and fond farewell to a great Duluth’s musician.

A partial viewing of the event can be found at A Concert for Mark Anderson - Live from RT Quinlan’s - YouTube.

Just a few evenings later, John Sonofmel, mc’d a benefit by Twin Ports musicians for Ukraine, with $10 entrance fees going to support the work of Doctors Without Borders in that country. Graciously offering their talents for the cause were nine acts: Emma Jeanne, Adam Herman, Marc Gartman, Cyr and the Cosmonauts, Rich Mattson & Germaine Gemberling, Misisipi Mike, Ian Alexy, Superior Siren Solo and The Field Birds. In just a few hours an eclectic mix of local talent was sampled and appreciated.

During the necessarily quick changes between artists, Sonofmel recited poetry, lyrics and experiences with Eagle omens. John Prine’s “Hello In There” was one of the outstanding numbers of the evening performed by Superior Siren Solo (Laura Sellner). Ian Alexy’s offering was a remarkable guitar solo. Clancy Ward displayed his musical versatility on the fiddle with both Misisipi Mike and The Field Birds.

Responding to a request, Misisipi Mike played his original, “Sober People”; an apt tune for the bar crowd, which received it well. Cedar Lounge extended its closing time to accommodate the wishes of the crowd to hear more.

Both events epitomized a spontaneous springtime flowering of the local music scene, which appears to have deep roots here in the Northland. One hopes they are harbingers of more good stuff to come.