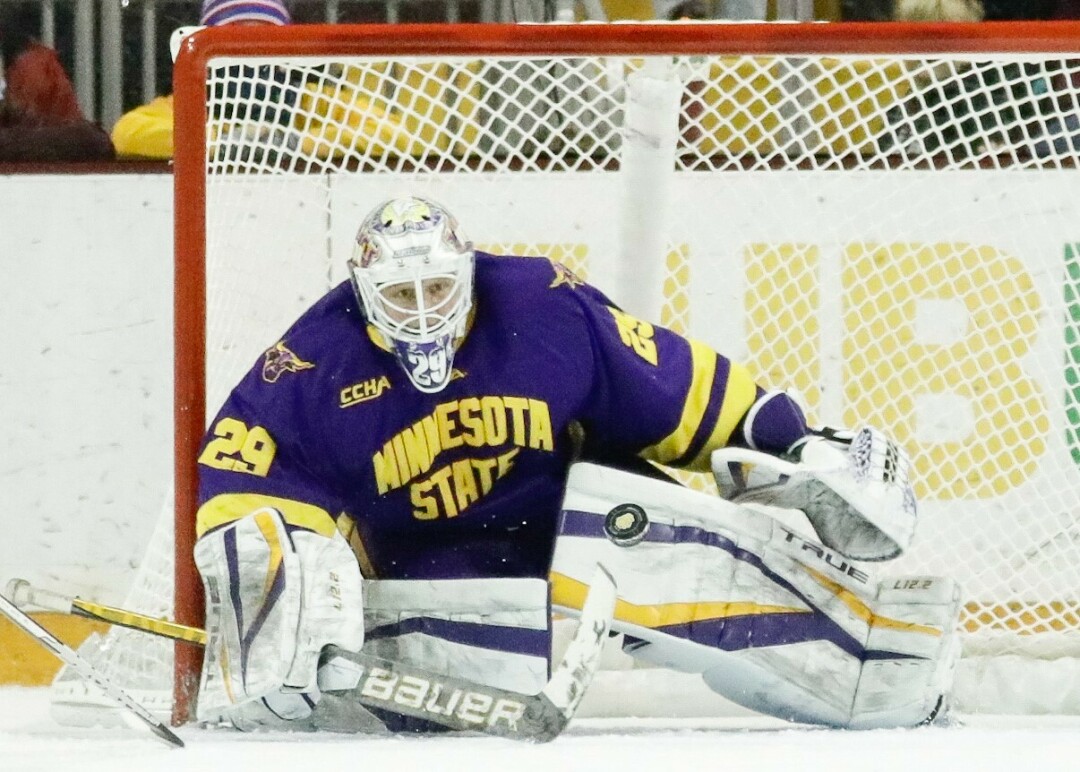 My favorite for this year’s Honey Baker Award, which is given to the player judged to be the best in college hockey, is Mankato goaltender Dryden McKay, who has been the best goalie in the country for two seasons and more. He has the most victories and the most shutouts in NCAA history. And any goaltender named after Canadiens star Ken Dryden, deserves to have his own statue before turning pro. Photo courtesy of Minnesota State University – Mankato.

The appearance of the University of Minnesota men’s hockey team in this week’s NCAA Frozen Four, and if the Gophers rank fourth among the four, the fact they are there means that anything can happen, and whichever team wins two games will be the national champion.

The Gophers must beat Minnesota State Mankato in Thursday’s semifinals, then defeat the winner between Denver and Michigan in Saturday’s final.

College hockey has changed a lot since Herb Brooks took a team of fragments and molded them together to win Minnesota’s first NCAA title in 1974.

Brooks had learned to coach under John Mariucci, who coached when Brooks played, and Glen Sonmor, a battler from Hamilton, Ontario, brought in by Maroosh to be his assistant.

Mariucci, from Eveleth, had made the determination to play with almost exclusively Minnesota high school players, who started at age 18 or 19, against the much older Canadian players brought in to Michigan, Denver, North Dakota and Michigan Tech – the teams that dominated the first couple of decades of college hockey as a big-time entity.

Mariucci brought in a few exceptions during his tenure, more experienced Canadians such as Murray Williamson, Lou Nanne and Lorne Grosso.

“I always tried to recruit a Canadian now and then,” Mariucci told me, “just to prove I don’t discriminate.”

Sonmor followed Mariucci and had only one noteworthy Canadian – All-America goaltender Murray McLachlan. But Sonmor was even more steadfast in carrying out Mariucci’s ideal, realizing that by playing only Minnesotans, the surging Minnesota high school programs would have a college right in their own start where they knew they would all get a chance to play.

Brooks followed that template, turning down some exceptional Canadian prospects, such as Doug Risebrough, who went off to play for the Montreal Canadiens instead.

But like Sonmor, Brooks realized a responsibility to the state of Minnesota, where players from all around the state would give anything to be part of essentially a state high school select team. If they weren’t good enough to win with all-Minnesotans, Brooks would have brought in an outsider or two, like Mariucci.

But he, and the Gophers he selected, were good enough, and their unrivaled internal chemistry was good enough to win in Boston Garden in 1974, and in the Detroit Olympia in 1976, and again in Detroit’s Joe Louis Arena in 1979.

Brad Buetow replaced Brooks and won a lot of games with all Minnesotans, as did Doug Woog, following Buetow, but there drop-off in cohesiveness and charisma were obvious, and so was the lack of championships.

And now it has come to Motzko, who also will recruit wherever he finds star prospects. If the Gophers win this championship, he will be convinced he is right.

But whatever happens, a solid number of vital alumni hockey players know what Herbie knew – that every time the Gophers recruit someone from outside Minnesota, another key instate player will go elsewhere, to UMD, to St. Cloud State, to Bemidji State or maybe to MSU-Mankato, which will try to take down the favored and highly touted Gophers for the second year in a row.

And no longer will it be a special, all-Minnesota camaraderie in the dressing room, and another little chink in the collective suit of invincible armor will be established.

This is a year for memorable NCAA championship games. It happened when Ohio State beat UMD in an overtime final, it happened when South Carolina beat Paige Bueckers and UConn in the women’s basketball final at Target Center, and it happened again Monday night in New Orleans when North Carolina rallied for 16 straight points to take a commanding lead against Kansas in the men’s final, when the announcers said the only way Kansas can win is to break the all-time NCAA record for final game comebacks.

And then they did exactly that, to win 72-69. Can the men’s hockey tournament live up to that? We’ll see.

The Minnesota Twins are supposed to open their rushed regular season Thursday, although they are set for Friday if weather is foul at Target Field. There is renewed hope, after the analytics masters dealt away team favorites like Josh Donaldson and Mitch Garver.

But the stunning addition of Carlos Correa from Houston and a complete rearrangement of the pitching rotation helped the Twins and hot-hitting Byron Buxton rise from a dismal start to reach 9-9 in spring training games.

If Buxton can stay healthy and stay hot with the bat, and if Correa can indeed give the Twins all-star caliber shortstop play, and if the rotation of Sonny Gray, Joe Ryan, Chris Archer, Dylan Bundy and Bailey Ober can get stretched and continue their impressive velocity and starting stuff, the Twins could be a fan favorite.

The Honey Baker Award will be given to the player judged to be the best in college hockey this season, and my favorite for the award is Mankato goaltender Dryden McKay, who has been the best goalie in the country for two seasons and more. He has the most victories and the most shutouts in NCAA history, and watch him closely against the Gophers in the semifinals. He can take over the game.

And any goaltender who is named after Canadiens star Ken Dryden, deserves to have his own statue before turning pro.

Next week, we can turn our full attention to the Minnesota Wild and the amazing run they’re making to the top of the standings, and a favorite’s role in the playoffs. 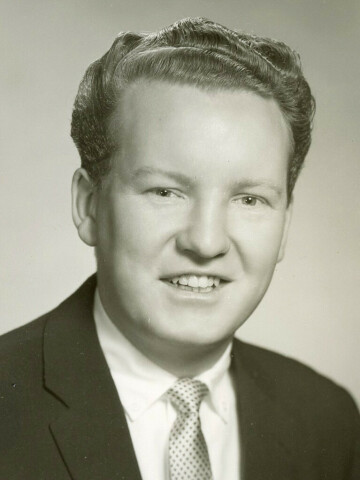 And some sad news

Word came this week of the death of Don (Red) Wilkie, a longtime WCHA referee who came down from Regina, Saskatchewan, to play hockey at UMD and stated to work in business, while establishing himself as a fair, objective and immediately recognizable referee, with his bright red curly hair.

I always enjoyed discussing hockey with Red, and we had a wonderful rapport, whether about teams, coaching or officiating.

Without realizing it, I probably saw Red play for the Regina Pats junior team at an annual tournament held in the old Curling Club when I was a kid. That was my first exposure to hockey, and it fascinated me.

Red went on to play for the Bulldogs before they moved into the WCHA and before the Duluth Arena-Auditorium was built, graduating in 1959. He and Ione raised two daughters in Duluth, Mary and Heather, and his brother, Gordon Wilkie, came down from the Regina Pats to play at Michigan before a minor league pro career.

A memorial service for Red will be held at Dougherty Funeral Home, on April 14, at 1 pm.

Another departure from this world is a more personal one. When I was in grade school I started playing baseball at Portman Square, on 46th and McCullough in Lakeside. My mom would pack me a bag lunch and drop me off at Portman at 7:30 every morning, five days a week.

A good friend of mine, Dennis Morgan, who also lived in Lakewood, had an older sister named Joyce who would drive him to Portman also, and the two of us would spend the entire day practicing, hitting, taking grounders and nourishing our love for baseball.

As years went by, Joyce bought a new 1957 Buick coupe, and she would take Dennis and me to Duluth Dukes games at Wade Stadium, where we would hang out near the bullpen and get to know some of the Dukes players. Joyce also took us to Sammy’s Pizza downtown for my first exposure to pizza. I hated it! But two days later, I craved more, and I’ve been hooked ever since.

Joyce moved to Arizona in 1956, got married and had a family, while also raising thoroughbred race horses. Dennis, who lives in Maryland, stays in touch with me while following UMD sports and baseball, and we share our opinions regularly.

Last week, I was wrestling with the credential request form for the Duluth Huskies, the modern equivalent of the old Dukes, in the Northwest League. My reveries drifted back to those youthful days long ago, when Dennis and I would roll down the windows in Joyce’s ’57 Buick on our way to Dukes games. No need for credentials.

Right about then, I got notified of an arriving e-mail. It was from Dennis, notifying me that his sister, Joyce, had died at age 87, in Albuquerque, N.M. She trained race horses for 66 years, right until she had some health issues that led to her moving in with one of her daughters in Albuquerque.

I remember Den’s parents, George and Tillie Morgan, and Dolores, another sister, and of course, Dennis.

I hadn’t seen Joyce for many years, except maybe on one return home trip she made. But every time I pull into the Wade Stadium parking lot for a ballgame, I will remember those wonderful, carefree summer nights, riding in that Buick.