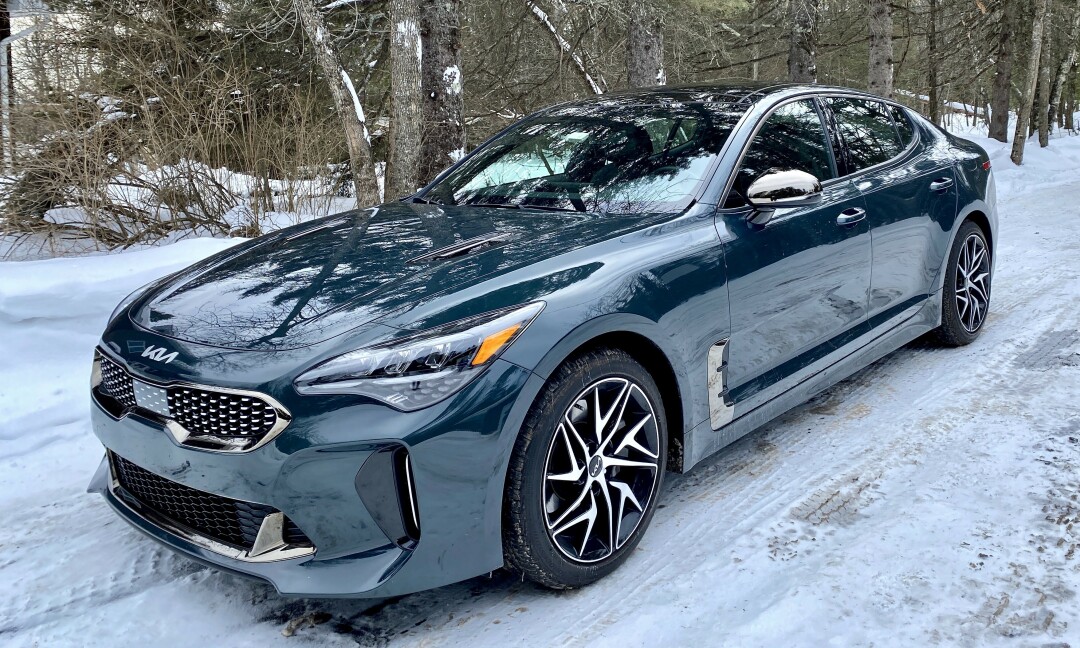 The attempt by the Hyundai and Kia partnership to design similar parallel vehicles in South Korea has transformed into an effort to differentiate between what used to be similar vehicles. Those include SUVs such as the Hyundai Tucson and Kia Sportage, Hyundai Santa Fe and Kia Sorento, Hyundai Palisade and Kia Telluride, and the mainstream midsize sedans, the Hyundai Sonata and Kia Optima.

After designers tried to make the companion models look similar, they have taken steps to separate them, which seems to be a good idea.

Kia went to extremes to split the Optima off from the Sonata by renaming the Optima the K5 this year.

And the attempt to make Kia the sportier of the two and Hyundai the more mainstream takes a dramatic step when you drive the new Kia Stinger.

The 2022 Kia Stinger I was able to test drive recently was more than just a Stinger, but the hottest GT-Line version, with sporty trim touches.

While stretched longer than the K5, the Stinger shares some of the same progressive concepts.

For example, the Stinger is a front-engine/rear-drive sedan, aimed at high performance, although the company will subtly tell you all-wheel drive is available.

The test-drive vehicle I got was the rear-drive model – which is interesting, being that winter can last a long time up in the Great White North where I reside. The North Shore of Lake Superior, stretching from Duluth up to Ontario, can attract some interesting late-winter storms, and the substantial amount of snow we’ve accumulated can hang around until late April.

Our rural residence is on top of a hill, and our driveway tilts upward for the last 20 feet to get to our rural road. The Stinger has all sorts of modes to help you drive under any conditions, with Eco, Smart, Comfort, Sport and Custom.

Of those, which would you choose if confronted by a 6-inch snowstorm?

Me neither. You might feel more comfortable if you could switch into Snow, Ice or Hang On, and, of course, with all-wheel drive, you really don’t need all of those, or the load of anxiety from wondering if a quick dose of power might over-reach the stability control.

Still the Stinger has another switch to hold the shifter from randomly upshifting as you drive down a hill, when upshifting could cause you to hurtle with too much momentum unless you are trying to get into Lake Superior.

There are all the requisite company safety settings for traction control and stability control, and the company is as good as it gets when it comes to lane-departure alerts and prevention, and even lane-following assist.

In our week, we didn’t have any great problems, although my adrenaline was on high if I hesitated too long at the tip of my driveway, knowing that once I had proved no cross-traffic was coming, too much acceleration would make the rear end want to have a mind, and direction, of its own.

We thought the Stinger was dark grey to begin with, but in actual sunlight, we realized that instead it was a beautiful dark “Ascot Green,” which was almost a Michigan State dark green, without tending toward any of the current brighter or lighter greens.

From the outside, the Stinger has a low, sinister, almost menacing look, like it could be headed for a NASCAR oval, or at least a German autobahn.

In fact, if you’re Kia, and you want to differentiate your sedan from Cousin Hyundai, what could be better than to aim at BMW, the standard of German performance sedans?

In fact, I would not hesitate to call the Stinger a “Korean BMW” in describing its overall demeanor.
The Stinger was introduced as a 2019 model, and the first upgrade, for 2022, makes some significant strides in the right direction.

The previous edition had a choice between the top-line 3.3-liter V6 and a 2.0-liter turbo, which is adequate, but a bit short of breath in such a heavy sedan.

For 2022, the 3.3 remains, but the base engine is the corporation’s new 2.5-liter 4-cylinder, turbocharged, for a surprisingly muscular 300 horsepower and 311 foot-pounds of torque.

That’s a solid chunk of power for any engine in a midsize sedan, but from a 2.5-liter, it is exceptional, and further evidence of what those Korean engineers are doing back home in Seoul.

That same engine is in the exceptional Genesis GV70, from Hyundai’s luxury arm. It is that platform that is also shared with the Stinger, which proves my point about the ability to share drivetrains and safety items but differentiate between two models.

Nobody would mistake a GV70 for a Stinger, nor vice versa. But in either car, you can aim at the EPA highway mileage estimate of 32 miles per gallon.

Climbing into the generously bolstered leather bucket driver’s seat, you are impressed at how quickly you’ve become compatible.

When you push the button to start the engine, you also are impressed at the throaty engine sound, which gives you no reason to suspect that it’s a 4-cylinder. It sounds more like a V6 or V8, particularly when you get on the gas hard and accelerate hard, letting that engine rev and respond.

The 18-inch alloy wheels aid the stability and cornering, and on those dry, snow-free days cruising up Hwy. 61 up the North Shore, the Stinger was a strong and willing  partner in some aggressive driving.

Same with Duluth’s hills. The 8-speed automatic, house-built, is smooth and precise, and large paddles affixed to the steering wheel are fun to use for upshifting, and a genuine safety ingredient when going down those steep avenues, where you can downshift at a fingertip touch and set the console “hold” switch and not worry about riding your brakes to control your speed.

The Stinger keeps a watchful presence on your driving, if, say you choose to hit the power and force the rear end to come around a bit. To do that, you want to shut off the stability control, but it never really shuts off entirely, keeping the basic control.

Some might complain about that; I figure it makes no sense to try to eliminate the added safety of a system technology.

The test car came in at $39,715, less than $4,000 above the base price. The only options are a very impressive Harman Kardon audio system, an extra wide sunroof, and a power passenger bucket.

You don’t need to hear your significant other grumble about not having a power seat, particularly after driving the car and experiencing the total adjustability of the power driver’s seat.

The overall impression of the Stinger is good, even in wintertime in Duluth.

The only suggestion I might make is that – much like its Genesis GV70 cousin – now I really want to drive a Stinger with AWD.