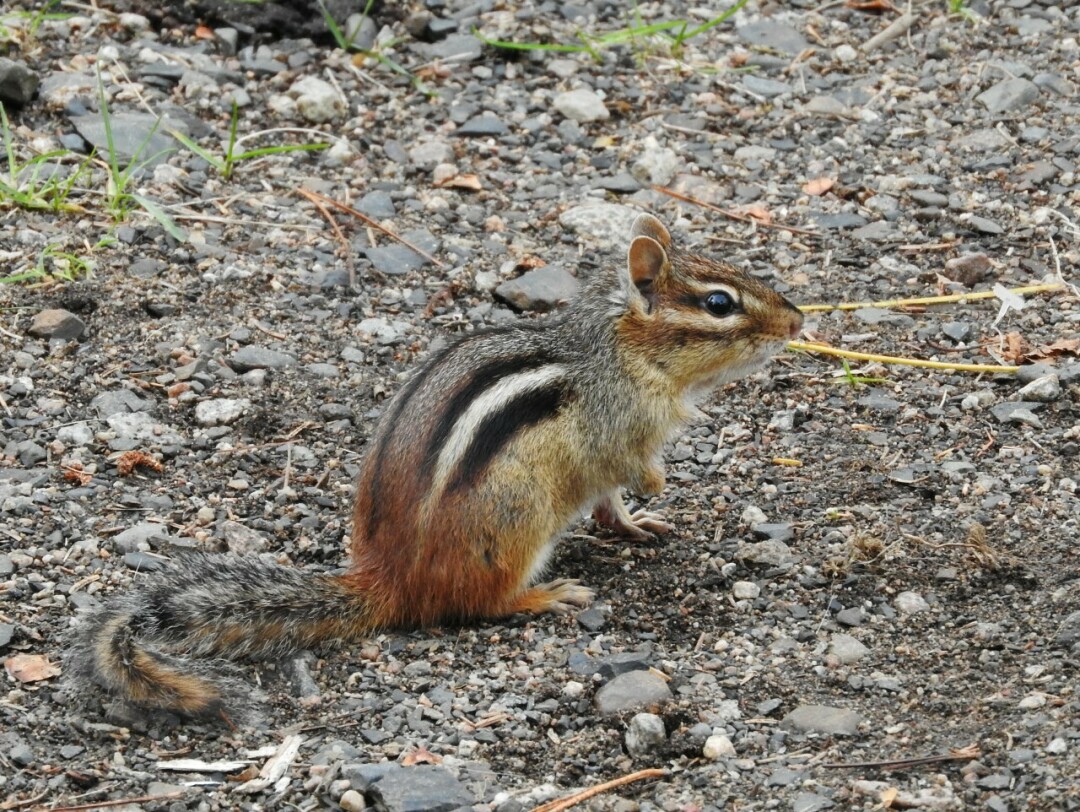 What are your favorite signs that spring is on its way?

The first trill of a red-winged blackbird, the guttural cry of sandhill cranes, and the swelling of pussy willow buds are all on my list – foretelling of many more changes to come.

But none of those have yet appeared at my house, which faces north and is surrounded by dense hemlock trees.

Spring may come slowly to my yard, but one of the first indicators is already scurrying around at breakneck speed.

Eastern chipmunks are early risers, at least in terms of the season. They’ve just emerged from their underground burrows – actually in the soil, not just the subnivean zone at the interface between soil and snow.

Their cozy winter burrows, lined with dry leaves, can be two feet deep and up to 30 feet long, although I doubt we’ve measured enough of them to capture all of the variability out there.

While I was taught that chipmunks aren’t true hibernators, and spend the winter only taking naps and staying alert for hungry weasels, new research has refuted that idea.

During the course of the winter, Frank discovered that chipmunks go through cycles of hibernation when their body temperature drops from 94 degrees to the ambient temperature of their burrow – around 40 degrees.

During these periods of hibernation, their heartbeat slows from their normal rate (which is up to 350 beats per hyper, stress-filled minute) down to 4 beats per minute. From their typical rate of 60 breaths per minute, they drop to only 20.

Emerging up from this intense nap is no easy task. But every few days the chipmunks warm up, wake up, feed on stored food, urinate and defecate. It seems these feeding sessions are necessary because chipmunks can’t put on enough fat to last them through the winter.

Chipmunks’ northern cousins, Arctic ground squirrels, are deeper hibernators. Their body temperature may drop to as low as 27 degrees. Even they warm up every few weeks, though.

Unlike chipmunks, they don’t use that time to eat, they use it to sleep. The hypothesis is that REM sleep is necessary to keep brains healthy, and deep cold doesn’t allow for that.

In the refrigerator of my yard, I never see chipmunks up and out in the middle of winter, but in warmer areas, these striped little squirrels often pop up on a mild day.

While you might assume that being warmer and able to find food in the middle of winter is nice for the critters, it may actually lead to their demise.

Frank found that after the warm winter of 2016, when few chipmunks at the field station bothered to enter hibernation, most of them died in their burrows.

During normal, colder winters, 87% survived. This is likely because the energy it takes to be active cannot be fully replaced by the meager food supplies available in winter.

The hints of warmth we’re feeling now are right on schedule, though, and active chipmunks are a happy sign of spring. Males wake up first, with females following a couple weeks later.

Within another week, females are in estrus and ready to mate with a number of their neighbors. This – and the two months when moms provide care to their litter of two to six young – are the only parts of the year that chipmunks are social.

For the rest of the year, chipmunks defend their small territories and food caches from each other quite vocally with chips and chucks, sometimes lasting 30 minutes.

Females tend to give alarm trills more often than males. This could put them at risk from a predator, but it may also alert their relatives to the presence of danger.

Since females tend to stay closer to their mother’s burrow when they disperse, they are likely related to their neighbors.

Chipmunks eat a lot of seeds – often stuffing their cheeks under our bird feeders and stealing away – but in spring there are more options on the buffet.

The tiny, carbohydrate-rich tubers of trout lilies are a favorite treat, as are trillium flowers and mushrooms. Insects, frogs, snakes, slugs, worms, painted turtles and even the eggs and chicks of songbirds have been discovered on the chipmunk’s menu, but those animal proteins make up less than 20% of their diet.

Here in northern Wisconsin, the range of the eastern chipmunk overlaps with the least chipmunk. The smaller cousins are more likely to be spotted in open areas or rocky outcrops, but I’ve seen both kinds at the same campsite in the Boundary Waters.

Size is one clue to their identify, as are the stripes – which fade out on the rump of the eastern chipmunk, but continue all the way to the base of the tail on the least chipmunk.

No matter how long their stripes, chipmunks are a welcome sign of spring.