I agree with Twain (a limp mea culpa) 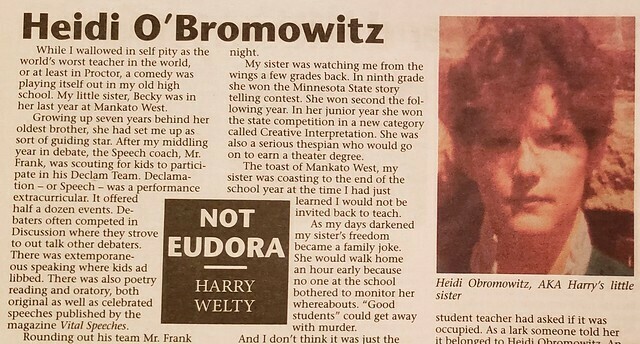 Last September I told a story as I recalled it with embellishments that suited me more than the experience my sister lived.

The column was about the time my sister Rebecca Welty assumed a false identity and became Heidi O’Bromowitz. It can be found at The Reader online. Trust, if you wish, this observation that I do not intend as a confession. I can only aim for honesty when I write.

The truth is and will always be illusive and debatable.

I knew I had to come clean when my sister paid us a visit on Saturday and handed me a folded page from The Reader. She had discovered her colleagues hunched over the column in a Twin City’s faculty lounge, madly giggling over it.

It was one of a series of columns I wrote about teaching mishaps that got me cashiered. The column was not the first time I wrote about Heidi.

In 1991 at loose ends as a stay-at-home-Dad I began writing a book to be called The worst teacher in the world. It was an early and premature attempt at a memoir.

I found it last fall and turned the chapter into a column. I added a delightful photo of my theatrical sister looking tough and surly. It screamed authenticity.

After it hit the newsstands I was very pleased with myself – for about a week. Then I discovered a letter my sister had written me explaining the infamous O’Bromowitz. Apparently I had sent her a copy of my chapter 30 years ago to make corrections. I had completely forgotten about it.

Among the errors in last fall’s story was the fact that my sister had only won a single state championship, not the two I reported. As for the rest, I’ll let my sister’s 1991 letter speak for itself:

“When I got back to class, the student teacher took my permit and asked if I needed help with my class paper. At some point earlier (and this is where the teacher – actually a team of student teachers – really missed the boat) Todd Trodahl had signed Heidi up for a paper topic. Perhaps this was done on one of the days the poor student teachers weren’t there. Anyway, the topic Heidi chose to write about went like this: ‘Teenage pregnancy; a Reality for Me.’

When the assignment of topics was approved and came back, the student teachers had edited my topic to read a little more simply, ‘Teenage pregnancy.’

“One of the very sincere student teachers asked if I wanted help and took me up to the school library. On the way up, she asked if I might want more than just help with my paper. She was trying to get me to a counselor. I’m sure I did indeed look surly because in the face of all that kindness, I couldn’t look her in the eyes.

“I grunted and said very little – checked out a few books and left. Fortunately she wasn’t with me at the check out. My student ID clearly had another name.

“The class ended and so did my role. But news of our scheme traveled far. Both Gretchen Etzell and Pat Flinn congratulated me. Gretchen even expressed a wish to have been in on our little comedy. I remember at the time I didn’t think much of her willingness to connive with us. Later the Vice Principal saw me in the hall and called me Heidi.

“.…Within a couple of weeks, the student teachers were clued in. They tried to be good sports and even add a little to the joke themselves. Apparently they talked about how Heidi was going to make a reappearance soon. Then one day, one of their husbands dressed up like a girl, and walked in. According to Todd – the effect was a little embarrassing.

“Harry, it took a lot of guts for me to walk in that class with my jean jacket and bandana and lots of makeup. I really never [risked that much] trouble back then. Like you said I was a good student and as such, given a lot of leeway. The way I figured it – and still do – it was the privilege I earned. Whenever I left school early, I simply went home and read a book. Among my friends, since I wasn’t the Straight A arrows they were, it gave me some prestige.

“Good luck with your election. I’d love to see a real trouble maker like yourself win. Kisses and mush and hugs and squeals to all the family.

“Love, Beck (This handwritten red ink note followed) P.S. use my name in your exposé. I could use the publicity.”

After my sister handed me the column I handed her the letter she had written me 30 years earlier. I explained that I had found her corrections after the column was published. I added that Mark Twain was of two minds about “the truth.”

On the one hand Twain said “Always tell the truth, it will gratify some people and amaze the rest.”

On the other hand he said, “Never let the truth get in the way of a good story.”

I agree with Twain.

P.S. That first Twain quote is more proof of my human frailty. It really starts: “Always do right, it will gratify……”