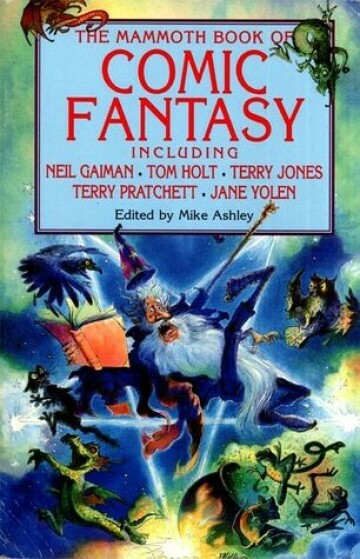 This is actually the first collection published, but there are no sequential stories, so it really doesn’t matter in which order they are read.

Cohen the Barbarian is often spoken of in Terry Pratchett’s DiscWorld series, but he is seldom seen. This is partially because he is usually on the Counterweight Continent, and partly because he is a very old, but still dangerous hero. He appears here in a story called “Troll Bridge.”

Mica the troll is a traditionalist. There have been trolls under his bridge for 500 years, and he is still trying to keep the tradition going. His wife is nagging at him to take a full time job at her brother’s lumber mill.

Suddenly he sees a man on a horse approaching. He recognizes him, and calls his wife and children up to see him.

“It’s Cohen the Barbarian come to kill me,” he says proudly. “ Now they will write songs about me, and you’ll see how important I am.”

Cohen calls him over, and says “I wasn’t going to kill you, I was just going to throw you over and take your treasure.”

Mica panics. “But I don’t have any treasure. I have to work at my brother-in-law’s lumber mill three days a week just to make ends meet.”

They begin to reminisce about the old days. Cohen says farms and fences are everywhere. Mica tells him that the old Cutshade Forest is nothing but stumps now

“I carried a club,” said Mica. “But only because a big troll with a whip told me I had to.”

Cohen gets on his horse and they walk away.

“How much did you give him?” the horse asks.

Tom Holt’s story is called “Pizza to Go.” It begins with 5,000 new converts in the desert, and the disciples forgot to tell them to bring sandwiches.

“Leave it to me,” says Jesus. He brings out his mobile phone and a small plastic card. The card says:

Pizza to Go
We deliver
Any time
Anywhere.

So the 5,000 don’t exactly get loaves and fishes, but anchovy pizzas are pretty close. Gross, I know, but tastes were different then.

The pizza party at the Borgias didn’t go as well, even though Lucrezia added her own toppings. She and cousin Bianca had the Hawaiian Surprise, and they were the only survivors.

“A Malady of Magicks” was Craig Shaw Gardner’s first story about the wizard Ebenezum and his apprentice Wuntvor. He went on to write three books about this pair.

Monty Python’s Terry Jones wrote “A Cat with Two Tails,” which looks like a fairy tale for a children’s book. The lead character is Frederick Ferdinand Fury-Paws the Forty-Fourth. He is the first cat to lose his second tail.

“Press Ann” by Terry Brisson is about an ATM machine that begins to get personal. First, it questions the amount they’re requesting, and then goes on to dispute the reason for that amount. It draws a stranger into the conversation, and asks him why he came to this particular machine. One of the choices it offers is the weather, and its settings are for light rain, snow or cloudy. Then it brings up Ann, who is the man’s former girlfriend, so if he wants to know what Ann’s bank account balance is, Press Ann.

Neil Gaiman’s story “Shoggoth’s Old Peculiar” is called a Lovecraftian Tale, and for good reason. Lovecraft, or at least his creation Cthulu, plays a part in it.

He’s starving, so he goes to a fish and chips shop and waits. An old woman comes and unlocks the door, so he asks if she’s opening up. “We’re never open on Mondays,” she says, and goes in. locking the door behind her.

Benjamin comes from a part of Texas that was dry both before and after Prohibition, so he thinks of bars as sinful places, but, on the other hand, the book says some pubs serve food.

He finds a pub called The Book of Dead Names, and goes in. He asks the frog-faced woman at the bar if they have food and a soft drink. She says she can make him a ploughman and gives him a bottle of Cherryade.

The ploughman is a slice of sharp cheese, a piece of lettuce, a slice of tomato with a thumbprint in it, something like a sour jam, and a stale roll.

He takes it to a table and eats it.

There are two men in long raincoats at a table in the corner, playing dominos and drinking beer. They finish their game and come to Benjamin’s table and ask him what he’s drinking.

“Cherryade” he tells them. Then there is an awkward pause, so Benjamin asks “And what are you drinking?”

“I’ll have one, too,”Seth, the short one, says. Benjamin expects to bring back two beers, but the barmaid has already filled three, so he takes a sip. He thinks some people would call it full-bodied, the body being that of a rancid goat.

“I suppose you’re here to see the village the American Innsmouth was named after. H. P. Lovecraft wrote about us a lot.

“He called us batrachian,” said Seth.

“What do you guys do?” Benjamin asks.

“We are acolyte of the Great Cthulu,” Seth tells him. “Of course there’s not much for us to do now, while

He is still technically dead.”

Things get hazy after that.