I am all out of WILD opinions 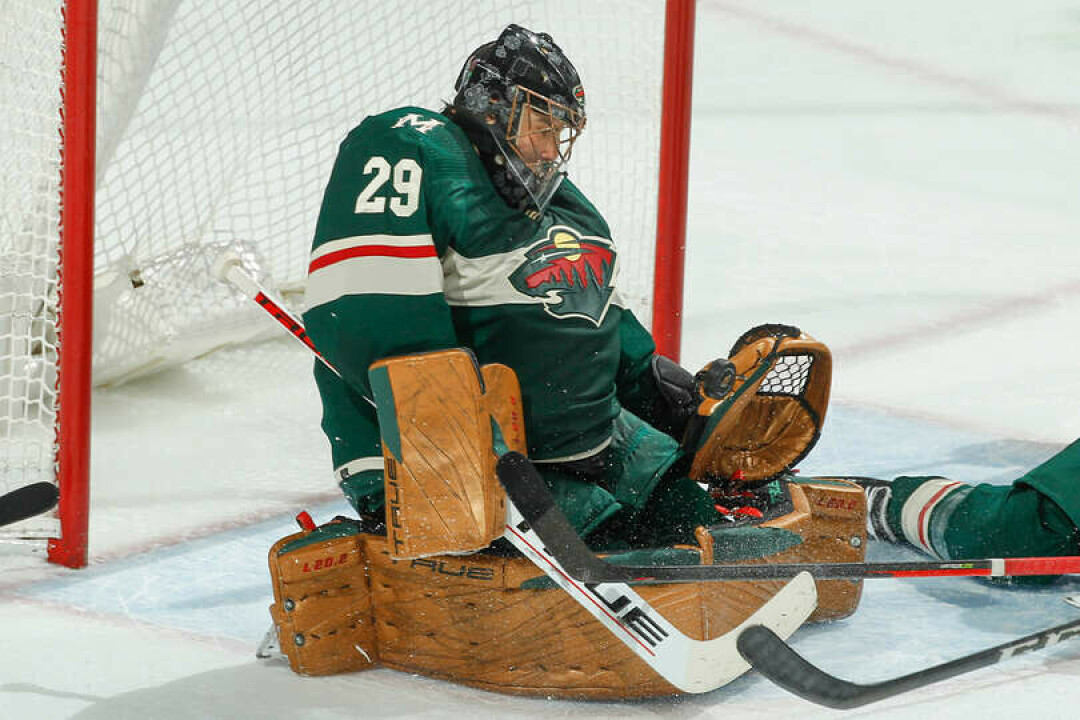 Marc Andre’ Fleury gets his first WILD victory in a 3-2 OT win vs. Columbus in St. Paul.

ST. PAUL – This has been nothing short of an exhilarating week for our Boys in Forest Green & Iron Range Red.

First order of business; I haven’t forgotten that in my pre-trade deadline day analysis of what the club would do in regard to the then-upcoming trade deadline day, I opined that WILD GM Bill Guerin was likely to sit on his hands. I felt that if he did anything it would be to unload a bottom-six forward or two and that would be it.

Well, it sure didn’t unfold that way last week but few in the State of Hockey are complaining about it.

If you have been a long-suffering WILD fan you’ll certainly understand how my feelings on the matter developed. Let’s face it the majority of us have been waiting for a Stanley Cup here for ages.

The former NorthStar faithful that gladly began pulling for the WILD when they entered the NHL has been waiting a very long time. For some of us it’s been a road that goes back to 1967.

So the trade deadline was looming large. Nothing about the team was saying that they had developed enough game to be a serious Cup contender. The previous month was a mini-disaster. The upcoming month wasn’t showing a great deal of promise.

If you are the Captain of this ship, with some challenging salary cap issues about to make life hard for you beginning at the end of this season, are you out making trades like Mike Milbury? I probably wouldn’t have been.

The problem with my line of thought was that I wasn’t factoring in what the next three years could be like for this organization. I was not taking the “win now” season-long mantra seriously enough.

After further thought it hit me that Billy G had his chessboard out and he really was moving more pieces around than I thought. It was the only path forward if the club really was all-in for this season. There is too much uncertainty on this team’s plate after this year.

And then Bill G also brought in some well-thought-out reinforcements.

I felt the team needed to elevate its goaltending game to lift that Cup window as high as possible for this year. When a team that played the heavy-hockey style took on the WILD, they would prevail. Think of CAL & COL for instance.

The club was too reliant on one or two guys. That usually meant that Marcus Foligno and Jordan Greenway would have to handle the physical stuff and the team needed more in that department.
As in all deals in the NHL some are easy to finalize but most aren’t. That’s just the way it is.

But Guerin worked all the details out and the “new” look WILD is raising some eyebrows around the hockey world.

He traded bottom-six forward Nico Sturm for Tyson Jost from the Avs. He also traded netminder Kaapo Kahkonen to the SJS for D-man Jake Middleton. He obtained Nicolas Deslaurier from the Ducks. He unloaded a salary cap-asphyxiating contract by trading Victor Rask to Seattle.

Then he went out and got future Hockey Hall of Fame first ballot inductee and three-time Stanley Cup winner Marc Andre Fleury from the Chicago Blackhawks. The WILD is now tougher and has improved their goaltending.

That’s not a typo. Marc Andre Fleury is ON the WILD. In fact he played last night and won. (3-2 OT vs. CBJ)

Church bells and goal horns were going off across The State of Hockey. The fans can’t wipe the smile from their faces and have some renewed pep in their step.

The usual hangdog woe-is-me Minnesota sports fan outlook is suddenly as upbeat, optimistic and giddy as I have seen it in many years. It is inspiring and uplifting.
The club has three OT wins in a row. In the first of those versus VAN (3-2) they put their “enhanced” heavy game on display.

With VAN in a back-to-back situation the WILD eventually wore down the Canucks. I also noticed various WILD players heading back to the bench at the end of their shifts in various degrees of discomfort from throwing checks and playing as physically as they could.

In my book playing that style can establish physical dominance over a team, but it can come with a price. You will have more players dinged up or injured so it has to be done with intelligence.

These past few days I have found myself quite eager for every game to start. This team is suddenly a lot of fun to watch!

With 18 games to go the WILD may not catch the Avs for a Division title but could solidify their current second place spot. They will also have a chance to get acquainted with their new teammates and smooth out their game and identity. So how far could this club go? Is that a fair question yet? I’m not sure since I don’t have the guts to ask it yet!

For the week past the club went 4-0 with wins over the VGK (3-0) VAN (3-2OT) CBJ (3-2OT) and COL (3-2OT). The team will face PHI and PIT in St. Paul in the upcoming week. They will then have back-to-back games versus CAR and WAS on Saturday and Sunday. I honestly saw the team going 3-1 this past week but I have been pleasantly surprised.

I would have to go back to the spring of 2003 to find a week that has been as exciting as this one.
In the standings in the EAST their eight playoff teams are set except for what will be some minor late-season repositioning.

The WEST is a different story though. After the two division leaders COL and CAL, nine teams are scrapping it out for the final six playoff spots. A mere 11 points separate them.

On the other hand this campaign is running out of runway. You have the WILD in front of that group with 84 points and VAN rounding it out with 73. But VAN is only 3 points from the last spot currently held by the VGK. Who will do what with which and to whom? Stay tuned. PEACE