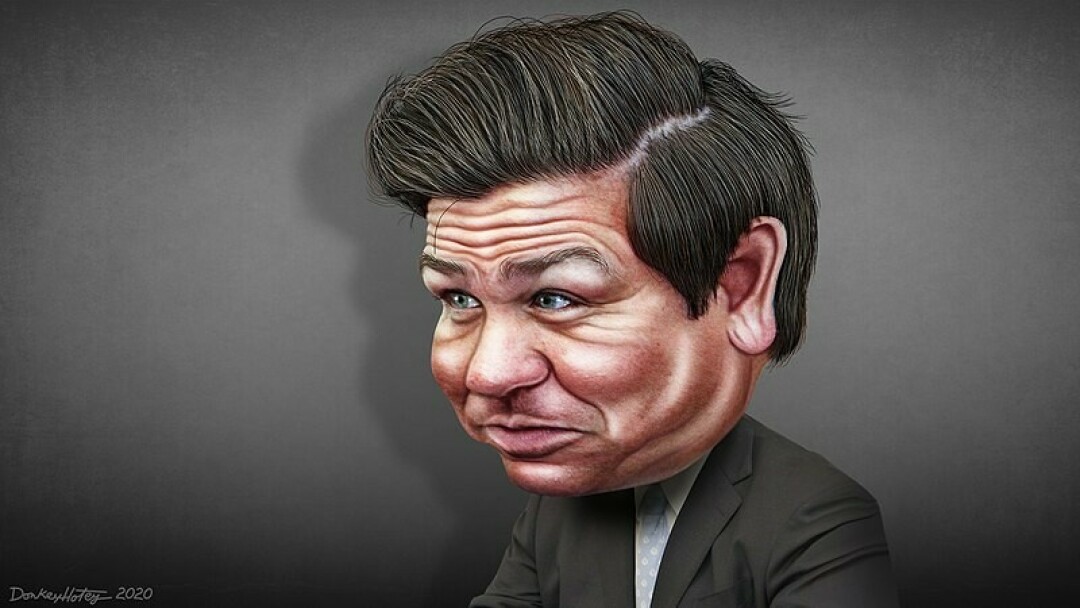 Whatever happened to real conservation, family values and honest debate?

With the word “transgender” in the headlines lately, which describes the power of the brain over the organs of the body, I thought I would come up with a new word describing the flip-flopping knuckle-dragging philosophy of Republicans lately. That word is “transolosophy.”

It describes the “translating” of the old philosophy of conservation ( the saving of the status quo and natural resource), the dominating theme of family values, and fruitful debate, into the new philosophy of White nationalism power and supremacy only.

Here are a few statements from prominent Republicans, whether elected, running for re-election, running for political office, or have experience in working in a very dark White House:
1. Former press secretary Stephanie Grisham: “Because Putin is a scary man, just frankly, I think he (Trump) was afraid of him….I also think he admired him greatly. I think he wanted to be able to kill whoever spoke out against him. …He loved the dictators, he loved the people who could kill anyone, including the press.”

5. Idaho governor candidate Janice McGeachin: “I need fighters all over this country to stand up and fight. There are too many Republicans who do not exhibit the courage that is needed today for us to fight and protect our liberties. We are literally in the fight for our lives.” (She has the support of extreme Western militias.)

6. Colorado representative Lauren Boebert: “I will not comply with Pelosi’s anti-science mask, she can kiss my mask.”

7. Michigan state senator Robert “JJ” Regan in a discussion for the Michigan Rescue Coalition: “Having three daughters, I tell my daughters, ‘if rape is inevitable, you should just lay back and enjoy it.” Two years before this incident, one of his daughters wrote this to district voters: “If you’re 18-plus, for the love of God do not vote for my dad for state rep. Tell everyone.”

8. Republican representative Marjorie Taylor Greene: “She’s a traitor to our country, she’s guilty of treason, and it’s a crime punishable by death is what treason is. Nancy Pelosi is guilty of prison.”

Why is there no relationship between elite educations and ability to govern?

Jonathan Carey of Hoboken, New Jersey, a graduate of Ithaca College, asked an intriguing question a year ago: Why don’t Stanford, Yale, Princeton and Harvard teach the difference between right and wrong?
Our state and national governments are loaded with Ivy League+ representatives, senators, and bureaucrats, but the results of their “work” is utterly depressing.

Why doesn’t a “fancy education” automatically produce the ability to work well with others? Don’t those universities represent “superior’ intelligence?

Carey has concluded: “If I were a Stanford, Yale, Princeton or Harvard administrator, I’d ask myself how people who graduated from my institution failed to learn the importance of right and wrong.”

According to the Congressional Research Service, of the 535 members, more than 515 have BA degrees, about 200 have law degrees, 100 have MA degrees, 25 have MDs, and 25 have Ph.Ds. Six of the seven new members of the House are Republican males without college degrees.

So the question is: why in hell is our country so screwed up?

It’s because many of the 535 have no clue what is wrong and what is right – or don’t want to talk about why.

First, I listened to lawyers on the Senate Judiciary Committee question Judge Ketanji Brown Jackson on her qualifications to sit on the Supreme Court. There was hour-after-hour of lawyer talk about the Constitution and the reasons why dozens of decisions were made through 244 years of congresses and courts.

I listened to the entire inquisition of Judge Brown last week. I soon decided that the smartest person in the room was the woman sitting in the hot chair answering stupid questions from bullying, misbehaving Trumplican senators who do not know right from wrong.

In 244 years we have had a number of economic depressions, two world wars, slavery and 3/5ths humans, the Vietnam Civil War promoted by the “best and brightest,” the disasters of Afghanistan and Iraq, a catastrophic Civil War, two long periods of economic inequality – just to mention a few of our perplexing problems. The central problem seems to be we have never learned to work well together to get at the truth.

Duke University political scientist Nicholas Carnes reviewed governments in 228 countries for the years 1875 to 2004 to see if a formal education made political leaders better leaders. The answer was a resounding “NO!”

A college education did not mean less inequality, a greater GNP, less labor strife, lower unemployment, or less military conflict. Why don’t we try to find out why?

Because he had won the Republican caucuses in Nevada. This trend has continued in Congress. In both 2016 and 2020 The Chosen One got two-thirds of the vote of Whites without college degrees, and so did Republican governors. Perhaps education does play a role in the ability to govern with compassion and common sense.

In the current pandemic, the Centers for Disease Control and Prevention have determined that the 16 states with the highest death rates were all run by Republican governors. The worst state was West Virginia (the home of Senator Joe Manchin but run by a Republican governor), the others in the top five were Oklahoma, Tennessee, Wyoming and Florida.

West Virginia had 204 deaths per 100,000, Florida followed with 200, Ohio with 142, Arizona with 138, and Georgia with 134. Living in a red state has proved to be more dangerous to your health.
The states with the lowest death rates were all run by Democratic governors. Washington, D.C. had the lowest rate at 27 deaths per 100,000, with California at 58. Vermont, Maryland and Massachusetts had the lowest rates among the blue states although governed by Republicans. These states had excellent vaccine, mask and social distancing plans.

Why don’t we study Finland? It has won Happiest Country for five years!

The annual World Happiness Report award sponsored by the United Nations for 10 years has been presented to Finland for the fifth year in a row.

The report is based on personal well-being of all citizens, generosity to one another, the Gross National Product, social support, personal freedom, honesty in government, and levels of corruption in 146 nations.

The Divided States of America is ranked 16th, clearly indicating we are not an exceptional country when it comes to the satisfaction of its inhabitants.

The Finns are getting used to winning. As Jukka Viitasaari says: “Many things are undeniably good here – beautiful nature, we’re well-governed, and lots of things are in order.”

Finland is known for well-functioning public services, trust in authority and low levels of crime and inequality. It would be interesting to know how many people from countries with high “Happiness” rates have left to migrate to the Divided States of America.

Will Florida Governor Ron DeSantis be able to out-Trump Trump for 2024?

My analysis: DeSantis is smarter than Trump, which doesn’t take much, but it’s going to be real difficult to overcome a sociopathic cult leader who has no personal limits or moral compass.

Trump is seen as a god-like figure by many evangelical Christians and the ever-increasing membership in QAnon. The Public Religion Research Institute conducted four surveys in 2021 in all 50 states that indicated 16% of Americans believe our government, media, and Wall Street are controlled by Satan-worshipping pedophiles of the Democratic Party. Eighteen percent believe violence will be necessary to save the country from Satan, and 22% believe that a “storm” is coming.

The Storm is a cataclysm when The Donald will succeed in pulling off a coup and all things relative to “Q” will be revealed to those of us left. The fascist Republican Party dominated by Trump is preparing for the 2024 election – and the Storm.

DeSantis has to beat out Trump who thought drinking bleach and taking animal-treatment Invermectin would protect people from the virus, so the ambitious DeSantis is going all out, proclaimed vaccine would harm women’s fertility, sued Florida schools and businesses that promoted vaccines, stopped all vaccine mandates, mocked and prevented the wearing of masks, and even scolded high school kids at a press conference for wearing masks.

One of the student’s mothers suffered from immune deficiencies. A study of Arkansas K-12 schools just proved that masks do work. Schools that required masks had a 23% lower incidence than schools that had no masking requirements

Do we have white, black, red, brown and tinted blood?

More than 2,000 years ago Cicero said: “To be ignorant of what occurred before you were born is to remain always a child.”

Evidently, with recent legislation, DeSantis and the Florida legislature is trying to have all Florida children remain ignorant until they die of old age. I wonder when they will try to make it illegal to give blood transfusions and transplant organs to people of other skin colors and ethnic backgrounds. We are in one race – the human race. All blood is red, even in red Native Americans.

I heard on NPR that a hospital in this country had a mass kidney transplant session last week. I think it was six patients and six kidney donors. The doctors didn’t say whether they transplanted a Black kidney into a White donor – or vice-versa.

Can you imagine a straight getting a gay’s donor kidney? Are we finally over Jim Crow One when one drop of Black blood could send you to the back of the bus or could lynch you on a Saturday afternoon in the park?

We have known about gender and homosexuality for thousands of years. Florida has about 1.6 million LBGTQ+ members with many thousands of transgenders.

DeSantis signed his “Don’t Say Gay” legislation so “kids will not be indoctrinated to choose to be gay or transgender.”

On second thought, maybe the ignorant or bigoted DeSantis is as dumb as Trump.