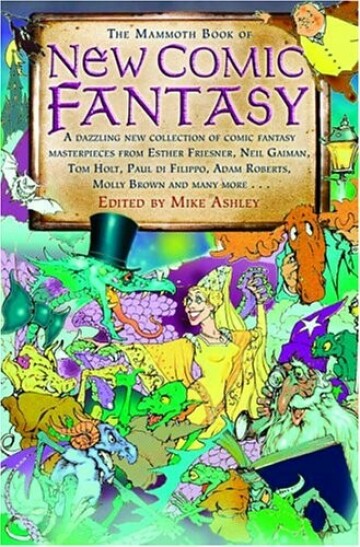 The New Comic Fantasy Collection begins with a story from Neil Gaiman called “Forbidden Brides of the Faceless Slaves in the Nameless House of the Night of Dread Desire.”
Does that sound like an H. P. Lovecraft story to you? You know, a Tale from the Crypt – lots of coffins, flickering lights and creaking doors?
Well. you’re wrong. This is actually the story of a young man who is trying to WRITE this story, and keeps losing his way because of his sense of humor.
“Pest Control” by Adam Roberts is a cautionary tale for people infested with Grendels. Never take advice from a company which is not licensed to remove Grendels. There are no ifs, ands or buts about it – the head MUST be removed completely to avoid even worse problems in the future.
Comic Fantasy is my favorite genre, but I have to confess that too many of these collected stories are short on the comedy, and some are short of fantasy too.
“Blue Magnolia” by Tony Ballentyne is about that classic film, starring Katherine Hepburn, Cary Grant and Humphrey Bogart. In the final scene, Bogart leaves the hat Hepburn bought him in Majorca. The film ends on that sad note, the message being that sometimes making the right choice can hurt.
Calvarley loves this movie, and when a new piece of equipment allows him to appear in the film, he does so, as unobtrusively as possible, having a drink at a table in the background.
A couple of his acquaintance see him in it, and think it is a great idea. Unfortunately, they have no taste, and miss the point of the film entirely. They insert themselves where they interact with the main actors, and in the process totally ruin the film, thinking it is better with a happy ending.
In “Colquitt’s High-Energy Trousers” by Steven Pirie, the pants have an electric quality. Colquitt is the bane of the Dean’s existence, although it is hard to work up any sympathy for the Dean, since his problem is mostly jealousy in that the girls in the typing pool speak admiringly about Colquitt’s nether regions.

Craig Shaw Gardner is the author of such B-movies as Bride of the Slime Monster and Revenge of the Fluffy Bunnies, but the story “A Drama of Dragons” is from the book A Malady of Magicks, which is about the sorcerer Ebeneezum and his apprentice Wuntvor. Ebeneezum has developed an allergy to any kind of magic, which send him into a sneezing fit. Wuntvor has to make do as best he can with what little magic Ebeneezum can teach him.

Tom Holt is one of my favorite authors, but I didn’t care for his story “Wrong Planet,” about an alien who has been searching for a way to get home for millennia, with no luck until his daughter, who has been here all that time, tells him she has a way for him to return. He is too chauvinistic to have thought she could do it. Odd, especially in an alien.

“Shoes” was written by Robert Sheckley, an author I recognized for his humorous science fiction stories.
The shoes in question are a pair of well made shoes Ed Phillips picks up at Goodwill for four bucks. The only defect appears to be a large slash on one of the toes. He thinks that is probably why their previous owner had discarded them.
He doesn’t get out of the store before the shoes begin talking to him. It turns out the shoes are a prototype computer designed to help its owner lead the best life possible. Their previous owner had been well-to-do, so the shoes constantly compares Ed’s lifestyle to his.
Ed begins to understand why the first owner left them at Goodwill. It’s bad enough being nagged at by a woman – you can get away from her, but your shoes are always there.
Grey Rollins has written a series of stories about a human named Martin with an alien named Victor for a partner as private detectives.
Victor is stubby legged, with a banana-shaped body, a long, prehensile tongue and a taste for putrified food. In “Spoiled Rotten,” they are hired by a man who says his daughter has been kidnapped, and he has received a ransom note asking for what turns out to be his exact net worth. They begin to suspect that all is not what it seems.

Ron Goulart’s story is called “I Married a Robot,” which is a lie. She married a man whose simulacrum was placed in a robot to protect the man from the person or persons who are trying to kill him. This seems like more science fiction than fantasy, although the lines are sometimes blurred. Also, very little humor.

“Stakes and Adders” by Marilyn Todd is a pretty confusing story. Yes, I know it’s fantasy, so you have to suspend belief, but I can’t imagine a woman happy to spend her life as a snake, even if her witch-cursed boyfriend is one already.
Steve Pirie wrote a technical story about Colquitt’s pants. In “Mrs Wilson and the Black Arts of Mrs Beelzebub from Number Six” he writes on a religious theme. I thought I was pretty well versed on Christian mythology, but I don’t know if this story reflects anyone’s beliefs or not.
Mrs Wilson’s problems began when Mrs Beelzebub moved in next door. Otherworldly cats and denizens from Hell are roaming the neighborhood, and ravens are gathering on Mrs Beelzebub’s eaves.
“I had rather hoped that she was one of the Basingstoke Beelzebubs, but apparently she is one of the Depths-of-Hell Beelzebubs,” thought Mrs Wilson.
She was the co-coordinator of the Neighborhood Watch, and the neighbor ladies want her to ask Mrs Beelzebub to move, so there was nothing to do but to pay her a visit.
She has to step over Cerberus, the three-headed dog who guards the Gates of the Underworld, to get to the door, and step over the pit of eternity in the hall to get to the lounge.
Apparently, in this story, Mrs Beelzebub is in charge of Judgment Day. She has benches lined up for the sinners to sit on.
She says “The Time is coming, Eve. Are you going to join me or oppose me?”
“Oppose is a strong word. I will provide the defense.”
Eve returns home and calls Adam. “Bring the apple,” she says.
When Adam roars up in his black Saab, he produces the apple. It is still fresh, with one bite taken out. Eve takes it, and takes another bite, the bite that forces God’s hand.
The last story in the book is “Sooner or Later or Never Never” by Gary Jennings. This story alone is worth the price of the book. I remember reading this story years ago, and I was laughing out loud. It is one of the funniest stories I have ever read.
I have touched on it earlier, when I reviewed The Lively Lives of Crispin Mobley. It is the first chapter of that book.
I wondered about its inclusion in The Magazine of Fantasy and Science Fiction, because, while I thought it was a hilarious story, I saw nothing that fit in either category.
I can’t quite say the same about a collection of comic fantasy. It certainly fits on the comic end, but it still requires a very loose definition of fantasy.
This is the story of a young, naive missionary of the Southern Primitive Protestant sect. Despite failing such courses as Offeratory Management and Nasal Singing at Southern Primitive College, he is sent to Australia to bring The Word to the Anula, an aboriginal tribe in the Northern Provinces of the Outback. The Northern Provinces are the size of Alaska, and are very sparsely populated.They are known to the Aussies as the Never Never.

He has read about the Anula in Sir James Frazer’s 12 volume The Golden Bough, where Frazer describes a rainmaking ritual which Mobey fastens on to.
Subsequently, we learn that the Anula know of no such ritual because Frazer did all his research on the Outback in the pubs of Sydney, as did most of the men whom Mobley listens to.
With a rare combination of stubbornness and stupidity, Money manages to ignore all the good advice he gets, and believes in everything he reads. Had Facebook been available to him, he undoubtably would be a conspiracy theorist, because for him, if it is written down, it must be true.
He is determined to have the Anula perform the rainmaking ritual, because he has a sermon prepared for it, whether it works or not.