One night in Sturgeon Bay 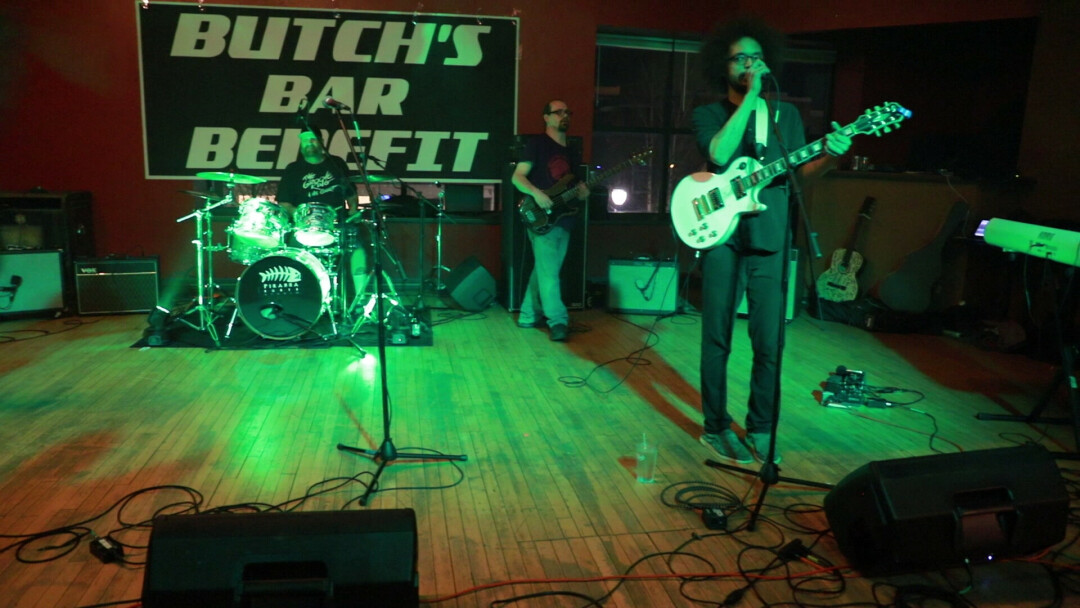 Duluthian Josh Brown takes the stage with a borrowed guitar during the after-jam at the Butch’s Bar Benefit on March 16 in Sturgeon Bay. Photo courtesy of Chris Opper, Nostalgic Productions.

Sometimes things happen for a reason. This story began when I needed a new bed for my new home. After spending way too much time thinking about and looking at beds, I finally want on a cold January day to Discount Furniture on East 4th Street, and was quickly introduced by store owner Tony Miller to a life-changing made-in-Minnesota mattress, but that is another story.

When it came time to divulge my address for delivery, it turned out Tony and I are neighbors, and gregarious guy that he is, we started chatting and found we have mutual interests in music and movies. Turns out he has a recording studio – Pinnacle Pointe Studios – and works with local talent.
We decided to get together and talk some more. This time Tony brought his friend Nick Campanella along, who brought a copy of his novel (Path of Affliction) for me (more on that another time). During this meeting, I happened to mention that in mid-March I was heading to Sturgeon Bay to see my musician friend pat mAcdonald and stay at his Holiday Music Motel.
Tony got very excited because he had heard of all the musical energy generated by the Holiday, and being an entrepreneur, he was interested in the business model that includes the music-themed motel with a studio, stage and lounge right next door. He’d heard stories of the many musical collaborations that have taken place at the Holiday, including the annual Steel Bridge Songfest that brings artists from around the world to Sturgeon Bay for a week of songwriting and performing. For Halloween, invited musicians gather to write and perform Dark Songs, and for Valentine’s Day they do the same, calling this event Love on Holiday.

So we set the date and booked rooms at the Holiday, not knowing that on the day we arrived the Door County music community was turning out for a musical benefit for Butch’s Bar, which burned down Feb. 22, killing two tenants in rooms above the bar. Butch’s was famous for its Wednesday night jams, hence the Wednesday night benefit on the day we arrived.

Joining Tony were two musicians he works with – Josh Brown and MN Moder – as well as photographer Tim Forrest, who came with his girlfriend to document the visit. Josh also works as a producer and musician at Tony’s Pinnacle Pointe Studios.

We started out with pat giving us a tour of the Tambourine Lounge next door to the Holiday, where pat has studios for audio and video, as well as a stage for the weekly Writers’ Night/open mic and occasional house concerts held throughout the year.

"It was an honor and a plasure to meet pet, get a personal tour of the space, and see him perform, too," Tony Miller said. "He is as great a host as he is an artist."

Having spent seven years in Door County before returning to Duluth in 2020, I was familiar with many of the musicians scheduled to perform, including pat. It was a great night of musical bonhomie, but the great revelation of the night for me and I think for most of those who remained for the after jam was the musical talent of Josh Brown.

After all the scheduled bands had performed, the stage was opened for a jam. Borrowing a guitar, Josh performed three of his well-crafted songs, with able assistance from the house band. What crowd was left went pretty quiet I order to hear him, and he was well appreciated.

“It was my first time meeting pat and being to Sturgeon Bay, so a lot to digest, but there’s definitely a connection o this place, or the people, or maybe the people make the place. Hmmm? All I know is I look forward to going back and making some noise,” Josh said.

He was particularly taken with the music-themed motel. A variety of instruments are on display in the lobby, and Josh was attracted to them as soon as he walked in.

“If I could sleep in the lobby I would, but I get it if that’s weird. Or let me take instruments to my room.” He said. “Possibilities for the future? There’s a lot.”

"I think it's an ingenious and innovative business model," Tony said of the Holiday. "Having the entertainment as well as the production of music in one place with sleeping arrangements next door for late-night sessions or outings is a perfect combination! The vibe of the place was definitely a magical one and I'd encourage anyone, whether musically inclined or not, to stay there and feel that for themselves."

All of the visitors were impressed by the musical camaraderie on display at the benefit. Almost $6,000 was raised.

Tony said he was also impressed with the connection between musicians in Door County and the lucky timing of our visit to witness it.

"I was impressed, to say the least," he said. "My impression of the community was one of love and unity, which is how any local artist community thrives. Also, shout out to every  that performed. Y'all absolutely killed it!"

There was talk of returning to record with pat, but also talk of bringing pat to Duluth in the not-too-distant future.

"We would love to collaborate with him in the future, and we look forward to whatever our next trip to Sturgeon Bay may have in store for us," Tony said. 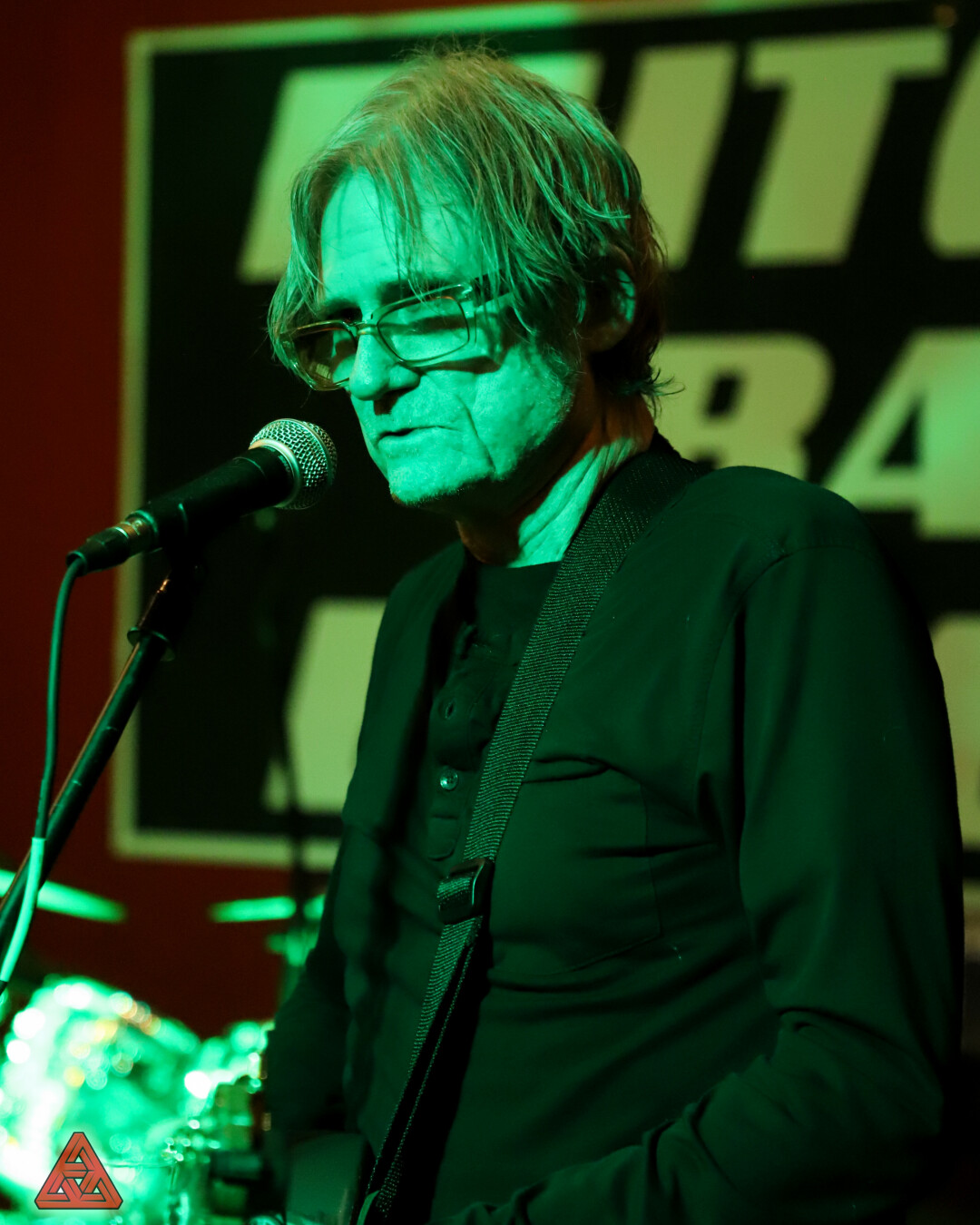 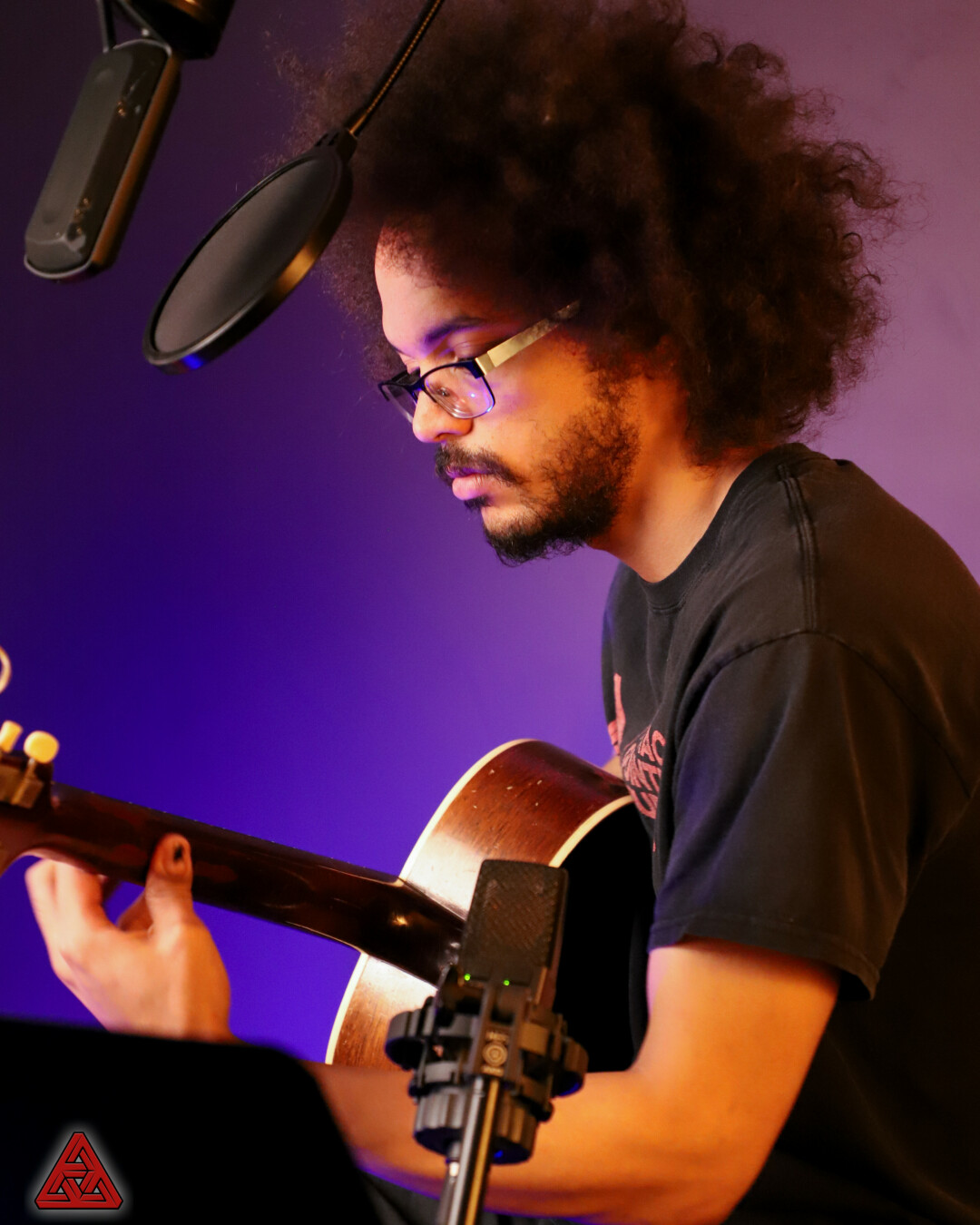 Seated in pat mAcdonald’s studio at the Holiday Music Motel/Tambourine Lounge, Josh Brown tries out pat’s beloved 1959 Martin D-29 guitar, which he has played since 1970.