Are the WILD revived? I’m not sure yet 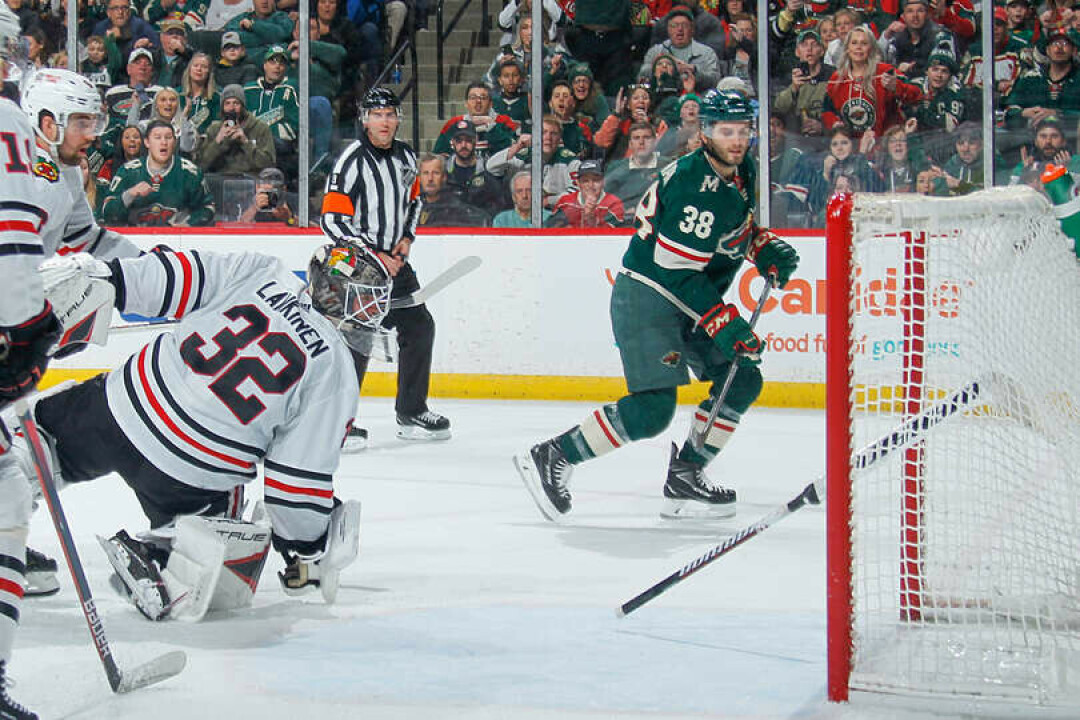 Ryan Hartman gets the GWG vs the Chicago Blackhawks in a 3-1 matinee win.

BIG SANDY LAKE – So, it’s Sunday evening. I am on my third hockey game of the day on the tube.
Actually these games have been on the screen near me but I’m not glued to every second of the action. I’m paying attention though.
I just finished reading an article on the Chicago Blackhawks and their trip to St. Paul yesterday. The WILD won the tilt by a 3-1 final.
When I think back on it I’m trying to get a feel for where I believe the WILD are at this juncture of the season. I already know where the WILD’s once-vaunted rival Hawks are. They are nowhere.
They’ve had a poor showing on and off the ice this season. The team pulled off a significant trade yesterday with the Tampa Bay Lightning, prompting one veteran on the team to wonder where they were headed as a team and organization.
They moved a very promising young player in forward Brandon Hagel to the Bolts for a couple of players back and most importantly two first-round draft picks. One in 2023 and one in 2024.
The player attributed to that thought was none other than its Captain. Jonathan Toews is probably wondering what that move means for him. Are his days in Chi-town numbered too? Could be.
At least they should be. If you include this one, the Patrick Kane-Jon Toews window has been closed for at least the last four to five seasons. There are multiple reasons. Take your pick.
This would be a good time in Hawkland to cash out on a couple of storied veterans while they still have some value and do a total reset. And if they don’t do it soon it will take longer and it will cost more. The Wirtz’s should know that already.
On this day many fans are wondering what the WILD will do in the waning hours prior to the trade deadline. This is especially true after a couple of hockey scribes were speculating that trade talk involving these two clubs has been revived with the subject of such a transaction being none other than Goaltender Marc-Andre Fleury.

So many questions. So few answers.
Are the WILD even in a position to entertain these thoughts? My answer is no.
Short of a time machine event favoring the club and bringing in Bobby Orr, Guy LaFleur and Jacques Plante in their prime the WILD is not in a Cup window. For some reason several people inside and outside of the club believe they could compete for a Cup with a shrewd move or two.
Please stop it. You are only feeding long-standing fan angst to do that. False hope is worse than no hope. And this club does have hope and a future. The team has some substantial salary cap challenges ahead though. And that makes managing the here and now that much more critical.
The Hawks suited up Fleury as their backup in St. Paul but didn’t play him. But at home this evening versus the Jets he dressed and played. And it was a disaster of a game for the Hawks.
I did pay some attention here because the Fleury speculation was still heating up earlier in the evening. The Hawks built a 2-1 lead early in the second period and then gave up four straight to hit the intermission down 5-2. They would go on to lose this game 6-4.
I have watched this team since I was a little kid. I’m not exaggerating that this is one of the bottom five in games I’ve ever seen them play. What is going on behind the scenes?
If Fleury is in play why is he even with the team this weekend? Don’t you just send him and his family to the Caribbean for the weekend? If you are going to deal him don’t you put the shiny object in the safe box and wait for the phone to ring?
None of this made any sense to me.
The Hawks writer suggests there was some sort of gamesmanship going on between Hawks management and Fleury. Why? Who wins that deal? No one.
The latest I’ve heard on this matter is that Fleury has informed the Hawks that he would only be willing to accept a deal with the WILD. So there is that. And now this is officially its own little circus with or without the Cup fantasy attached.
How does tomorrow go in The State of Hockey?
I don’t think the club does much of anything. even concerning where the WILD is headed for the remainder of this season. I look for one or two more bottom-six forwards to be moved for picks and for some player reshuffling between St. Paul and Iowa to occur and that will be it.
Trade deals are very hard to make at any time. With all the different factors involved with this team, I think Bill Guerin will have an uneventful day. I might be wrong, but...
IN YESTERDAY’S GAME with the Hawks I thought the WILD played just good enough to win and might have given the Hawks more respect than they deserved. Or is that just the lingering question mark-cloud I have overhead every day that is forcing me to question this team right now?
In the last half of February the club went 1-5. So far in March they are 5-5. 6-10 over roughly the last month does not inspire me to begin making trade deals like a GM with a pocket full of salary cap space and draft picks. The team has looked a bit better lately but has it consistently gotten back to the habits that made them winners for the better part of the first half of the season?

We are soon to find out. This upcoming calendar week features four home tilts; vs. the VGK, VAN, the CBJ and COL. The last two of these tilts will be in back-to-back mode. A 4-0 week would be a dream. A 3-1 week would help the team quite a bit.
For the week just ended the club went 2-0. In addition to Saturday’s win they beat the Boston Bruins at home on Wednesday night in a 4-2 victory. That was huge since the B’s are 7-2-1 in their L10. Has this team turned the corner now? Is the mid-season funk over with? It better be. Because in less than 24 hours the rest of this season gets very real. PEACE