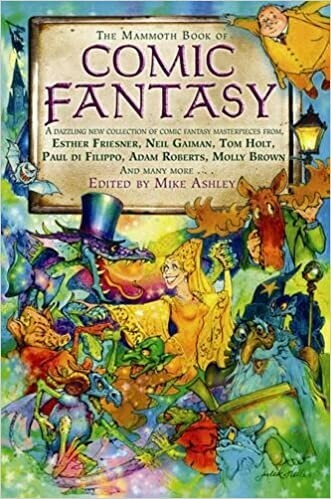 I have found four collections of short stories in the comic fantasy genre: The Mammoth Book of Comic Fantasy, The Mammoth Book of Comic Fantasy II, The Mammoth Book of Awesome Comic Fantasy and The Mammoth Book of New Comic Fantasy.
There are a lot of stories in these books, so the best I can do is cover a few of my favorites, and hope one or two of them will appeal to you.
The first story is from Comic Fantasy II, and is titled “The Aliens Who Knew, I Mean, Everything” by George Effinger. It is told from the point of view of the American President, who is confronted by the Secretary of State telling him that the aliens have landed.
“What do you suggest I do?” the President asks.
“Well, they’re saying we should do what President Eisenhower said. And they don’t like being called aliens. They call themselves the nuhp.”
“They met with Eisenhower? When?”
“A scout ship landed in 1954 with two nuhp aboard. They met with President Eisenhower to discuss how to break the news to the American people.” I have a nuhp here who was at that meeting.
“What did you talk about?” he asked the nuhp.
“Mostly his golf game,” said the nuhp. “We corrected his putting stance. He was very appreciative, and promised to start telling people about us as soon as we left.”
“So they put those documents in a folder, put the folder on a shelf, and then forgot about it?’”
“That appears about right, yes sir.”
“Typical Republicans” groused the President.
The nuhp had parked their huge mothership on the Mall of the Americas. They apologized for the damage they did to the Washington Monument, and promised to fix it first thing in the morning.
The President met with two of the nuhp called Hurv and Pleen. He asked them if they could make our deserts blossom, and they said “No problem.”
They set to work in Namibia, fencing off the desert from view for four weeks.
When it was time for the big reveal, they had a big cocktail party and called officials and the media, and opened the gates to reveal greenery as far as they could see.
“Hollyhocks?” asked the President.
“It’s the very best flower.” said Pleen.
“ I think we might have been hoping for a little more variety.” the President said.
“Hollyhocks are the very best flower,” said Pleen, “I wouldn’t kid you.”
So they thanked the nuhp for the hollyhocks and decided to wait with the Sahara, Mojave and Gobi deserts.
America wanted to put its best foot forward, so they put on a show for the nuhp. Starting with a church choir from Alabama, followed by a Michigan band playing collegiate fight songs, clones of the original show re-creating the Steve and Eyedie Experience, and the New York Philharmonic under the baton of a 12-year-old girl prodigy playing Beethoven’s Ninth Symphony.

“Beethoven’s Ninth is a great piece of music,” Pleen said, “but of course, it isn’t his best work.”
“What? What is his best work?”
“It’s his Piano Concerto No. 5 in E flat major. and that is not the best music ever composed by humans – that would be the score for the movie Ben Hur.”
The nuhp’s home world was Nupworld, which of course is the very best world in the universe. They have no intention of abandoning it, but they do enjoy sightseeing through the minor planets, so our national parks were soon filled with their mother ships.
The nuhp had opinions on everything, although they didn’t call them opinions – they were incontrovertible FACTS.
Car buffs might agree with them that the best car ever made was the 1956 Chevy Bel Air, but for the nuhp, to be the very best car it had to be in aqua and white.
“So when,” the President asked, “are you going to show us your technological advancements?”
“What technological advancements?” Hurv answered. “We are behind you there. We haven’t got to the transistor yet.”
“How did you get to space ahead of us, then?”
Hurv laughed. “You didn’t really want to go. You put all your money into wars and Olympic Games.
Why do you think our motherships have to be so huge?” Hurv asked. “They run on vacuum tubes. It’s almost impossible to find vacuum tubes in outer space, so they have to carry a full complement of spare parts.”
“Another thing about them is you can’t just turn them on and go. You go out in the morning and turn the key on, and then you have to wait a few minutes for it to warm up.”
There are hundreds of amenable planets throughout the galaxy, with friendly populations. Thanks to the “Shortcuts” the nuhp have found, people can visit almost all of them.
Everyone knows and loves the nuhp, but not necessarily as neighbors.
The second story from CFII is called “The Shoemaker and the Elvis,” by Lawrence Schimel. I am sure you’ve heard the story about the shoemaker and the elves, and if you’ve read correctly, you realize that this story does not have one elf in it. To be truthful, there is not a traditional shoemaker here, either.

This is a story about a podiatrist who makes a pair of orthopedic blue suede shoes for Elvis, who had worn through his old shoes, and damaged his feet by constant dancing.
What would you do if you became an Evil Overlord?
This question was asked people on the internet. They received hundreds of replies, of which the top 50 were chosen for inclusion in this book. Many have to do with not giving the hero a chance to do anything before you shoot him.