Mikko Koivu event, and WILD will be sellers at trade time 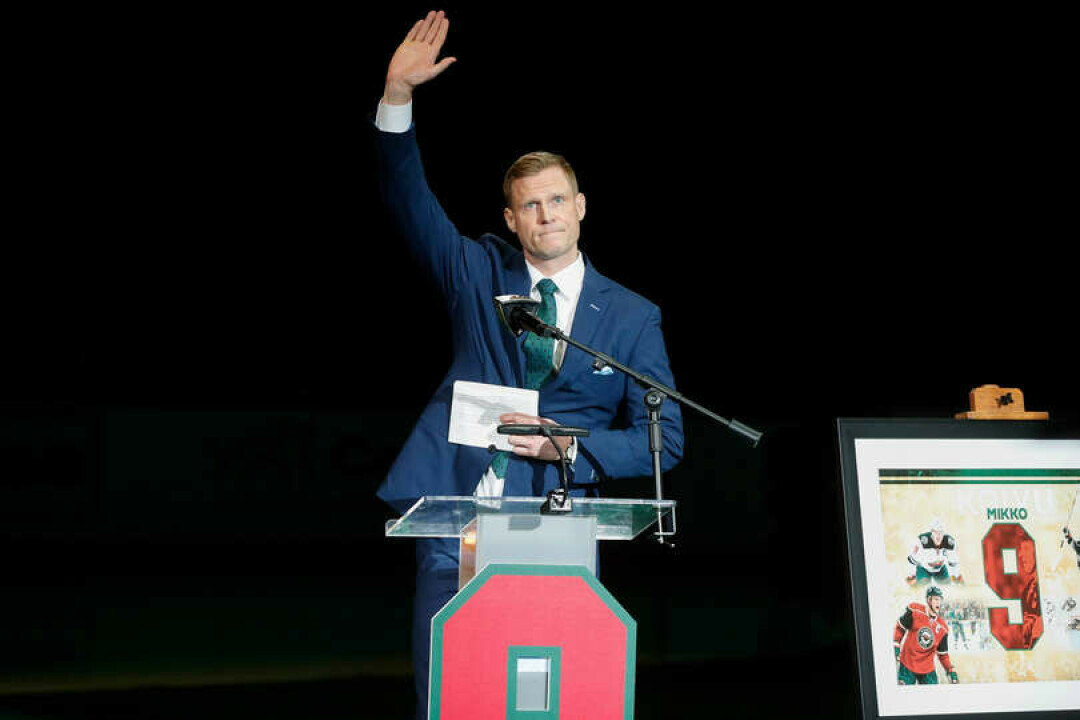 Mikko Koivu salutes the fans at his jersey retirement night. Photo by NHL.com.

ST. PAUL – This evening on the street where I grew up something quite special happened. The Minnesota WILD retired its first player sweater in franchise history.
The number #9 sweater of former Wild forward and Captain Mikko Koivu was raised to the rafters in a pregame ceremony before their game with the Nashville Predators.
I have seen plenty of these during my years of following the game and this one was as splendid as they get. I would say that in the leadup to this event the majority of WILD fans were happy to see this happen and that the first recipient was going to be Koivu.
But as always in the fickle land of Minnesota sports fans some complainers were trying to dampen the spirit of the event.
They would say they weren’t sure any WILD player had a great enough career here to warrant such an honor. They would allude to his stony facade of total all-out seriousness regarding his disposition.
It would be brought up how hard he would be on teammates at times, especially the youngest guys on the team.
It was a common refrain among the anti-Mikko faction that he always got paid more than whatever scoring production he brought to the team. This derision went on and on through the better part of Koivu’s tenure with the team.
I cannot possibly count how many times I would battle fans that didn’t like him for one reason or another after articles that featured fan commentary threads.
I just never understood this treatment of a guy who was a pretty hardcore 200-foot player in all phases of the game and whose dedication to his organization and the game would go unequaled to this day. He demanded that you play hockey the right way or don’t waste your or his time.
It was even more baffling when I would read or hear what others in the game had to say about him from their perspective. I’m talking about NHL & AHL GMs and I’m talking about opposing coaches and players. To a man they always said how hard he was to play against and spoke of his compete level being off the charts. In all of his time in the league I never heard anyone that had to go against him say he was an easy mark.

But in the State of Hockey there are at least a few folks in the stands who see a different game and player than the people in the business do. You know, the ones that get a paycheck from doing so.
Some of these armchair tigers are adamant that they know better than those who are employed in the business of hockey. And I’ve never been one with the ability to swat them away like an August mosquito so we have battled and battled.
Well, we battle no more. Mikko won. He now has something that none of his detractors ever will. No player will wear the WILD #9 sweater ever again.
It’s fitting. He has earned that in my view. As recently as three days ago I came across an article with a fan commenting on how undeserving Koivu was. I literally broke out laughing at the inanity of the comment.
For the anti-Koivu faction it isn’t a Hockey Hall of Fame induction. You must be pretty good at what you did for your club but that’s only a part of the equation. It isn’t a popularity contest either.
It’s no secret that Koivu rubbed some players and media the wrong way at times. Upon retirement he has acknowledged that several times. He knows he isn’t Wayne Gretzky but scored many important points for this club.
Time for a shootout? Where’s Mikko? Penalty kill? The team’s PK was never better than when the Captain was on it.
How about keeping all of your teammates honest? You just don’t give anything less than total effort to his club.
Tonight was Koivu’s night. There was a part of me that wished as he and his children watched his banner rise to the rafters that he would have said to the gathered masses that for those who were constantly criticizing him that they could kiss his posterior. And then quickly turn around to show them a cheap pair of those airbrushed Halloween party pants with an open flap on the backside exposing a couple of faux bare buns.

But that’s not in Koivu. He doesn’t need to say anything to anyone now. He knows his place at the franchises table. So do the fans who understand the game we love and what he brought to it.
Congratulations Mikko. Hyvin thety Kapteeni!
FOR THE CALENDAR week ended this evening the WILD had a 2-2 record. They beat the NYR 5-2 at home and won in Detroit in the SO in a 6-5 final before dropping two games. They lost at the CBJ in a SO 3-2 and dropped tonight’s contest versus NSH in a 6-2 setback.
As a recent loss to DAL allowed the Stars to elevate themselves toward a playoff berth the loss to the Predators allowed them to tie the WILD for the 4th spot in the Central division. In your division those are “four” point games and the WILD lost both of them. There was optimism after the win against the Rangers. Then the rest of the week happened and with the trade deadline coming up quickly is the team going to be buyers or sellers?