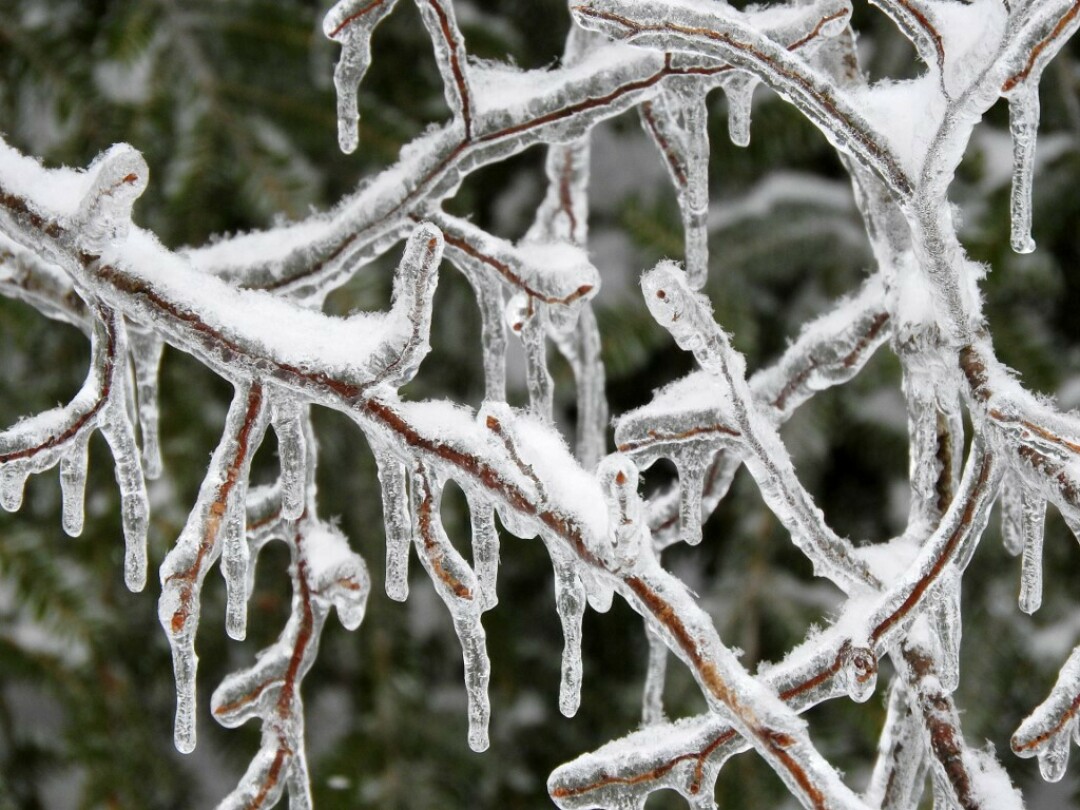 The ice-covered trees from the recent storm are stunning in their beauty and devastating in their destruction. Photos by Emily Stone.

“Isn’t it beautiful?” I exclaimed over and over this past week as sunlight glinted off the ice-covered trees. The glassy twigs outside my bedroom window distract me each morning, and I find myself gazing into their patterns and sparkles while I should be getting ready for work.

Of course, it’s also a terrible beauty that has wrought destruction on our forests, created deadly challenges for wildlife, and become a headache for the people who manage, maintain and use our many roads and trails. (As well as for the people who had a branch spear through their roof.)

“A mark of true intelligence is the ability to hold competing thoughts or ideas while striving to better understand both,” wrote my philosophical friend on her Facebook page this week.

It felt especially appropriate as my mind swirled trying to imagine all the impacts of this storm. Clearly, it’s beautiful. Clearly, it’s destructive. What are the positive and negative impacts, both now and into the future?

The immediate impacts on our trees are visible everywhere, while the long-term effects remain hidden. Gracefully bent birches form archways and tunnels over our roads and trails. Some are flexible enough that the tips of their twigs are now frozen to the ground. Some broke off completely.

The bent trees may straighten up over the next few months; or they may not. A Mr. Ashe, in a 1918 issue of the Monthly Weather Review wrote, “a young stand ... bent into an inextricable tangle ... the signs of this storm will be written in this stand for a century ....’’ Many of the straightened trees should be fine for lumber, but bent ones will be difficult to harvest and sell. Some smooth-barked young hardwoods may exhibit “stretch marks” on the outside of their bend.

What determines whether a tree will bend or break?

In part, it’s the structural characteristics of the species – wood density, flexibility, branching structure, height-to-diameter ratio, and surface area of the twigs and needles available to catch heavy ice.

When you cook asparagus, do you also find the place where the stem turns from tender to woody by bending it until it snaps? I imagine the force of the ice snaps trees in the same way.

The breaking point may also be determined by the characteristics of older wood vs. younger, or a weak spot caused by decay, a knot or other deformity.

The death of an individual tree is sad, of course, but the impacts on the forest as a whole are not all bad. Light gaps created by this storm will release saplings in the understory, and new trees will grow quickly to fill the gap. This storm is a rare opportunity for them – if they aren’t buried under debris.

Dead trees are an opportunity for insects and fungi – and therefore for woodpeckers and other wildlife, too.

Paul Cigan, Forest Healthy Specialist at the Wisconsin DNR, sent me a long list of the most common fungi that might colonize trees killed or damaged in this storm. Happily, oak wilt wasn’t one of them; the beetles that transport it being out of season.

Also happily, chicken-of-the-woods was on the list – one of my favorite edible mushrooms.

“Trees are more alive when they are dead,” is a favorite quip of ecologists while they imagine the extensive network of fungal hyphae, bacteria and insect tunnels inside a snag.

Where trees are damaged but not killed, the wounds left by ripped branches may develop into cavities.

Dead trees rot evenly, so hollows only form in living trees, because the outer wood stays intact while heartwood rots away. Tree cavities for nesting are a limiting factor for many birds, including bluebirds, sapsuckers, flickers, tree swallows, red-headed woodpeckers, wood ducks and American kestrels.

The wounds from this storm may yield more chicks in the future!

In general, the impacts on wildlife are negative in the short-term, but positive in the future.

Several people told me of seeing ruffed grouse confused and forlorn, walking hungrily across the crusty snow in the storm’s aftermath. The ice now prevents them from seeking warmth and protection from predators by diving into snow roosts.

The ice has also encased the aspen buds they love to eat in a hard, slippery shell. Not even the fringe of pectinations they grow on their toes – a combination of snowshoes and Yaktrax – could help them initially. They had to turn to starvation food, like the acidic fruits of highbush cranberry.

Just a few days later, though, south-facing trees had captured enough sun to melt ice off the twigs, and flocks of grouse were spotted taking advantage of this microclimate to find food.

Grouse and other birds might struggle again this spring and coming fall, though, since many of the cylindrical catkins that hold birch, hazel and alder flowers (and then become seeds) have snapped clean off.

Deer are struggling through the crusty snow, of course – that’s an issue every year – but the weighted branches of pines are now within nibbling height, bringing them a food source that had previously been out of reach.

My friend Jan even spotted a deer browsing on the twigs of a birch crown that had crashed to the ground.
Five days after the storm, as I snapped into my skis for a tour of the damage, Metro Maznio pulled up on the groomer. Metro has been in the area since the 1950s. I asked if he’d ever seen a storm like this, and he shrugged a “yes.”

He remembers some trees taking months to straighten, and seeing others permanently arched. Ice storms aren’t unprecedented here, but current models of climate change suggest that we’ll be seeing more of them – their beauty AND their destruction. 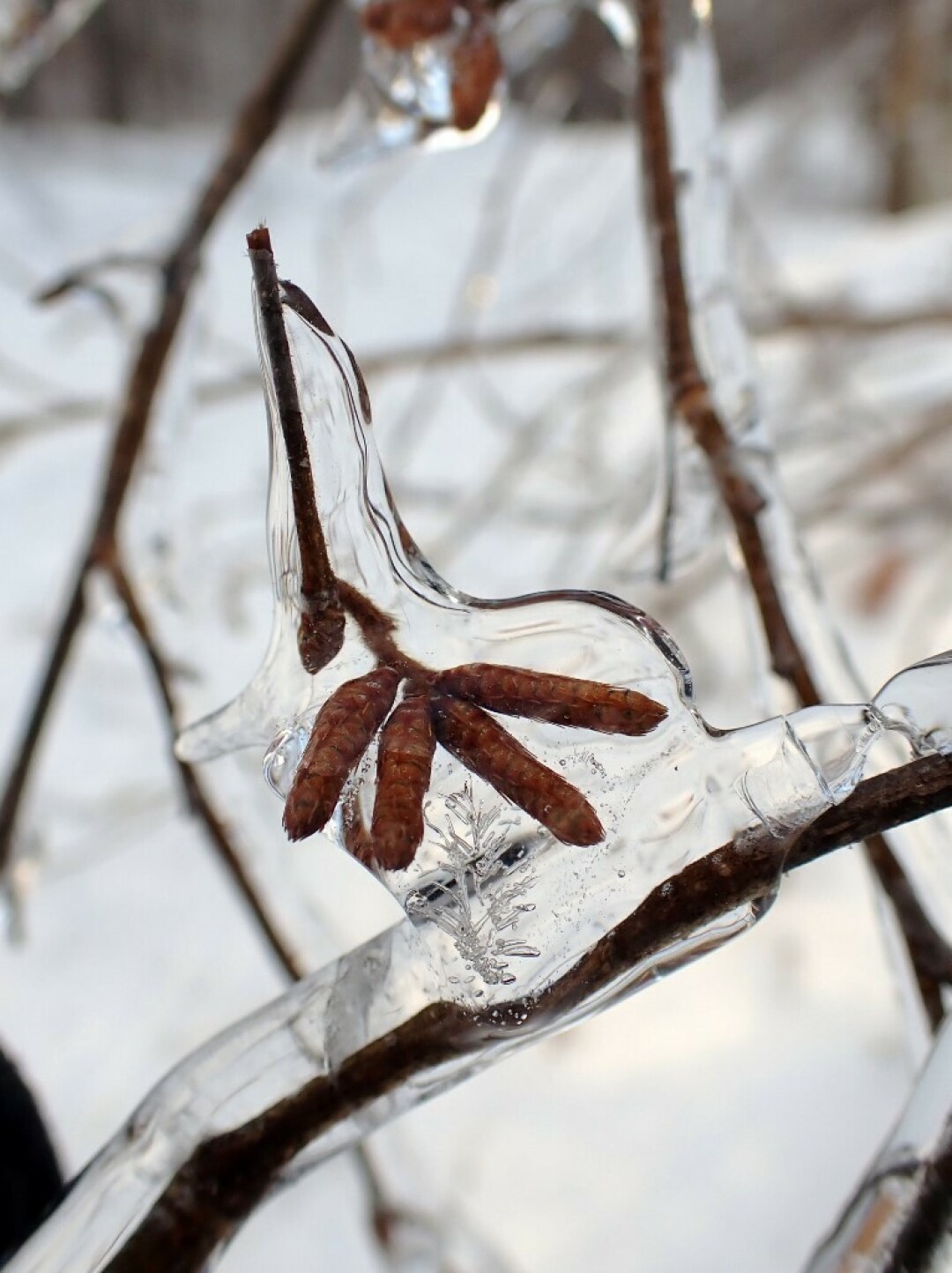 These birch catkins were encased in ice and glued to the twig next to them. Then their stem broke. They won’t be producing flowers to attract warblers or seeds to feed grouse.