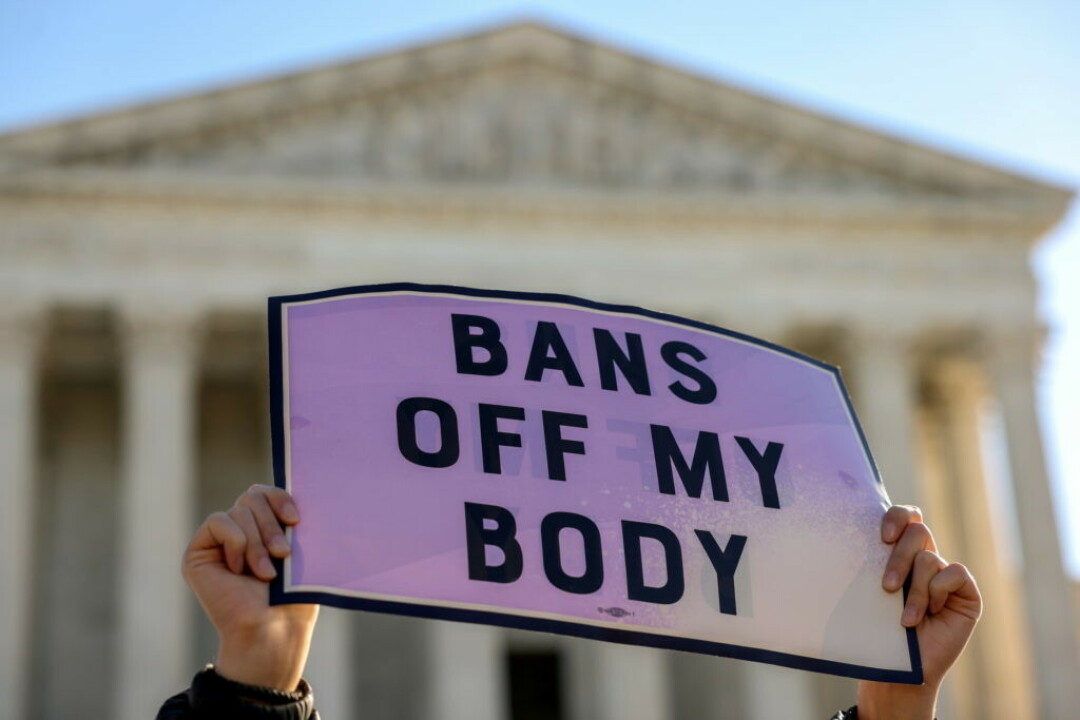 What can we do to limit population when females can have 39 births?

This is what happened in 1967 when Lorraine Saulino-Klein of Laramie, Wyoming was an 18-year-old student nurse at Kings County Hospital Center School of Nursing in Brooklyn. In a hospital room with a half-dozen doctors watching a pregnant 16-year old girl rolling her eyes, thrashing on a bed, yelling in pain, it was her job to keep tracking her temperature. The girl had been brought to the hospital after taking some pills and using a coat hanger in an abortion attempt.

The doctors seemed helpless, and the Catholic girl, who hadn’t told her parents she was pregnant, reached a temperature of 107 degrees before she died.

Lorraine writes at age 73 it was a never-forget experience: “I was a Catholic teen. But right then and there I thought no one, no matter what mistake or goof-up or whatnot they did in their life, they shouldn’t have to suffer and die like that. It was a nightmare. And I will for my whole life never forget it. It traumatized me. But it made me firmly in the camp that no matter what you do in your life, nobody should have to go through that.”

But we all know that through the centuries hundreds of thousands of girls and women have died without necessary reproductive health care because of the rules, laws, religions and other actions of men. If God were a woman, what would She do about abortion and sex?

Who gets abortions in the U.S. in 2022? The Guttmacher Institute, the most respected pro-choice organization, says 25% of Americans will have abortions before they end their childbearing years. It all starts when girls reach sixth grade and age 12.

As a father of four girls and as an elementary principal for 11 years, I and school staff have witnessed the remarkable switch from the fall of the year when girls hate boys – to the spring of the year when they fall in love with the same boys. The boys, maturing slower, don’t have a clue what’s happening.

According to Guttmacher, teenagers are having fewer abortions today because they are getting rudimentary sex education in some middle and high schools. Teens who just get “don’t do it” or abstinence lessons get abortions at a higher rate.

Years of statistics support that fact. The typical adult abortion patient is already a mother, is poor, is unmarried in her late 20s, and has some college education. Actually the same people who get pregnant and give birth are the same people who have abortions at different points in their lives. They normally get 43% of abortions in the first six weeks of pregnancy and 92% take place in the first trimester. Abortions in the third trimester are rare and occur for medical reasons.

What in the world is the world  doing about abortions?

The Center of Reproductive Rights estimates that six in 10 of reproductive age in the world are living in countries that broadly allow abortion. A few facts about how countries are gradually accepting this basic human right:

1. Sixty-six countries having 25% of reproductive age prohibit abortion or allow it only if a life is in danger.
2. Sixty-three countries having 35% of reproductive age allow abortion for protection of physical or mental health and consideration of social or economic circumstances.
3. Seventy-four countries having 38% of reproductive age allow abortion for any reason for a limited number of weeks, usually about 12 weeks. The United States, North Korea, Iceland, New Zealand, Singapore, Canada and Vietnam allow abortion generally up to viability of 24 weeks and beyond for medical and life-saving reasons.
4. Many countries allow abortion after the cutoff if there is a valid reason with many having the same viability as Roe v. Wade. In Germany, as an example, abortion is permitted until 12 weeks, and until 22 weeks if it is necessary for physical or mental health or for present or future living conditions. Denmark has a 12-week cutoff but abortion is allowed after that for factors including health, person, income, type of housing, age, income, type of housing and occupation.
5. In the Divided States of America, only eight percent of abortions take place after 13 weeks. Patients have to arrange transportation, child care, time off from work and time to travel distances to a clinic.
6. Many Catholic countries such as Mexico, Argentina, Italy and practically all European countries allow abortions. Ireland, once the “most Catholic country in the world,” now allows abortions because those of reproductive age raised so much hell with the government the laws were changed to pro-choice and the Vatican ambassador was sent packing. The Irish got tired of spending money and work time going to England for an abortion. Ireland now supports the LBGTQ+ community and has a same-sex-married prime minister! German Catholics and their bishops, have told the Vatican to recognize homosexuals as equals or they will leave the Vatican and form another denomination.
7. In the Divided States of America, half of reproductive age are below the poverty line and another 25% are just above the line. Six of 10 are having an abortion for the first time, a third are living with a partner and 14% are married. These people don’t have access to health care or contraceptives and unintended pregnancies occur at a 45% rate.
8. In Catholic Columbia, the Green Wave (the protest color) of women finally convinced the government to decriminalize abortion on Feb. 21. That means there are no more prison terms for the first 24 weeks of pregnancy. Previously, abortions were only allowed if there was risk for the life of the mother or life-threatening foetal malformations or because of rape, incest or artificial insemination. More than 400,000 abortions were performed yearly but only 10% were legal. Medical records indicate at least 26,223 unsafe abortions were carried out in 2021. Many deaths and injuries were not reported .

Of all the pregnancies in America, only 62% end in births

What happens with the balance of 38%? Twenty-two percent are aborted and 16% end in miscarriage for a multiple of reasons. It has been ever thus in modern times.
If you are a person of faith, you must recognize there was some real sloppy work done in the Garden of Eden with the system developed from Adam and Eve.
If you are an acolyte of Charles Darwin’s theory of evolution you might believe that imperfect human beings are at the top of the chain of being so far – that is, before the robots take over.
According to the experts we had 3,613,647 live births in the DSA in 2021. Do the math for the numbers of abortions and miscarriages.
On average, American families want two children. This means women will spend about three years in pregnancy and associated care.
This also means she will spend 36 years trying to avoid pregnancy. It ain’t easy.
Sex means a lot in human life, whether it’s love or lust. About 45% of pregnancies are unintended. We lead the world because of faulty pills and devices, misreading the calendar, having that extra martini, or that sudden thrust of lust, or the lost debate.
Stuff often happens to certain organs. Of the unintended pregnancies, the researchers say 27% were “wanted later” and 18% were definitely “unwanted.”

Of course, life begins at conception, but only six out of 10 breathe air

As a farm boy I watched the birth of chickens, geese, cats, dogs, rabbits (we raised them for food), pigs, calves and foals. Once I even helped my dad pull a calf out of the mother with a rope around a leg. The cow was in great distress and displayed her thanks later.

To those who yell “MURDER!” at abortion clinic patients, march against Roe v. Wade and pass laws making it extremely difficult for the poor to get an abortion, we are only near the top of the chain of being. None of us are angels sitting at the right-hand. Few of us are kings and queens or philosopher- kings.

We are beneath them and slightly above bonobos, apes and chimps in the survival of the fittest of Charles Darwin’s science of evolution. Notice I did not write “theory.” Evolution is a science way beyond that.

Why the Vatican is opposed to the use of modern contraceptives to prevent abortions is absolutely appalling and stupid. The use of Vatican Roulette (calendar and thermometer) has never worked very well as birth control. Too many variables.

Then we have the old men in the Vatican and various Bishop Conferences – and even a Supreme Court justice – who say those of reproductive age should have the “unwanted” child and then put it up for adoption. That’s not only cruel, the poor cannot afford the $16,884 needed for the birth or the thousands of dollars needed for prenatal and postnatal care and equipment for the baby.

I have never seen a financial offer written on a pro-life poster. What if the fetus needs a $50,000 operation to survive in the womb?

Studies show that 95% of Americans have premarital sex. Abstinence is required by law to be taught in 39 states and it must be emphasized in 28.

But there is that haunting old axiom: there’s enough blood to operate the penis and the brain – but never at the same time.

And there is something deeper going on in pro-life circles. It’s politics. Do you think the Trump cult is concerned about “life begins at conception” and the number of abortions? Why are they really opposed to contraceptives?

No, this is all about white nationalist political power over women. Fifty years ago Republicans made an offer to Catholics and evangelical Christians: vote for us and we will support pro-lifers and the domination of women. A deal was consummated.

Republicans don’t give a damn about abortion because their wives or girlfriends have had them at the same rate as other Americans of reproductive age.

More than 100 billion humans have lived on earth. That means perhaps 25 billion fetuses were lost to miscarriages and another 30 billion to abortions. Abortions have been recorded for more than 5,500 Years. That’s life and death on an evolving earth. It will not change until those of reproductive age have full control over their bodies.

By the way, the world record for live births is held by Mr. and Mrs. Feodor Vassilev of Shuya, Russia. In 27 pregnancies they had 69 live births. If interested, Google their names.