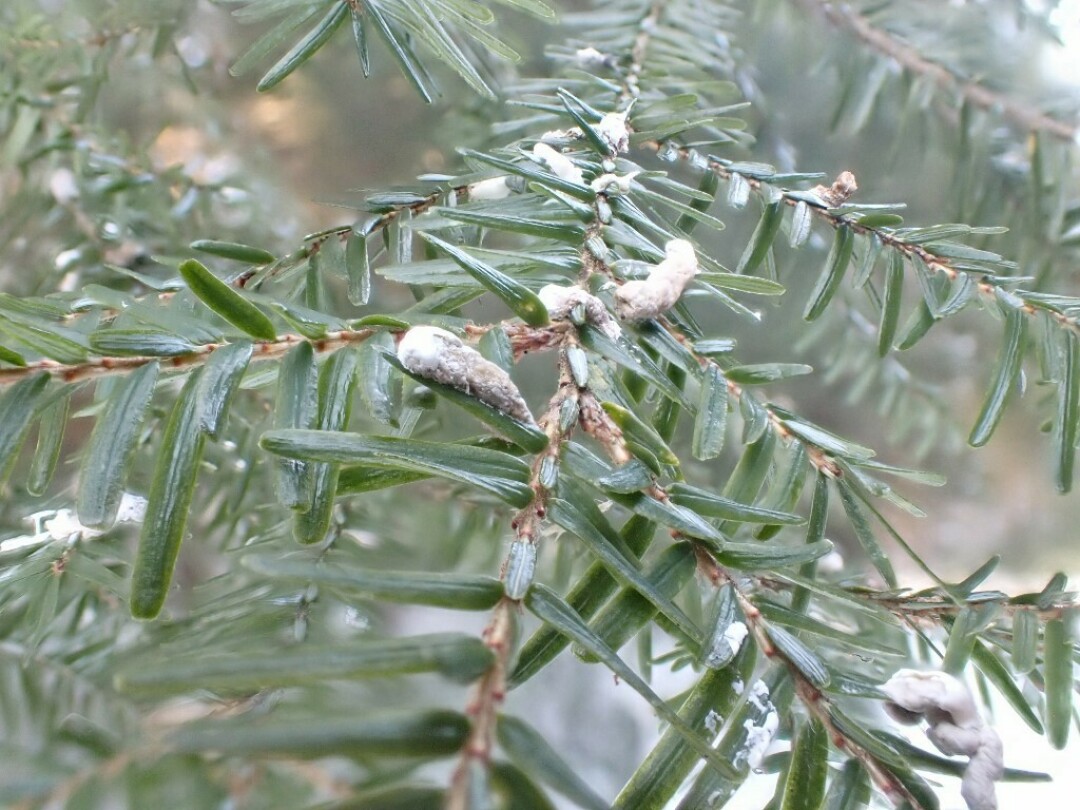 A few weeks ago, as I was watching the flocks of redpolls, goldfinches and chickadees swoop between hemlock boughs and my one little feeder, I noticed that the hemlock needles had spots. Could it be snow?
No, not after one of our long dry spells this winter. Since the plow pile hadn’t yet grown to enormous heights, I was able to nose in close to the trees for a better look.
As I examined the small, whitish, cylindrical lumps frozen to the twigs, first I started chuckling to myself, and then I went to grab my camera. The trees were covered in little nuggets of redpoll poop – of course I had to get some photos!
You know, I probably say the word “poop” more than your average three-year-old. During presentations about my Natural Connections books, I’ve been tempted to ask my adult audience if someone would count the number of times I say “poop.”
Why does it come up so often? We’ll, for starters, poop is essential to the flow of nutrients in nature.
For example, inside the leaf of a pitcher plant lives a community of critters. When an ant or other food item drops in, fly larvae, mosquito larvae and midge larvae all work together to break it down.
Bacteria and other microorganisms help, too.
At each step in the food chain, a community member eats something, takes what they need and poops out the rest. Their poop might still contain valuable nutrients that are useful to another critter.
Eventually, the nutrients take a form that the pitcher plant itself can absorb directly through its leaf.
Poop comes up when I teach kids, too, of course. Almost every lesson I present starts with a review of the food chain. Food chains really do make the world go ‘round.
After Sun, plants, herbivores, omnivores and carnivores, I like to include scavengers and decomposers. Since both of these groups eat dead stuff, I had to find a kid-friendly way to differentiate them.
My solution: scavengers have regular poop, and decomposers poop out soil! This is shorthand for the fact that decomposers break their food down into its chemical components – nutrients like nitrogen and carbon – that are essential for plants.
Poop is also valuable for studying wildlife. When I was in Alaska in 2018, I tagged along with a few different research projects, and two of them were gleaning information from the scat of snowshoe hares.
“We can’t just walk out there and say ‘hey animals, come out, I want to count you’,” explained Denali National Park’s wolf technician, Kaija Klauder, to a group of high school students from Anchorage who were attending a summer science camp. “Luckily,” she continued, “all animals poop, and that’s awesome for science.”

My student buddy and I counted all the Skittle-shaped, sawdust-filled hare pellets in a one-foot radius sample plot. The 200 plots our group sampled that day would get plugged into a spreadsheet.
With a little bit of math, scientists could estimate how many bunnies must be in the area in order to make that many poops.
Later that summer, I joined Claire Montgomerie, a graduate student from the University of Alaska Fairbanks, doing research in the Brooks Range. She was trapping the snowshoe hares to count their population numbers, and then also drawing blood to learn about body condition and stress levels.
In addition, we filled little whirl-top bags with fresh hare scat from under the wire mesh of the trap. Chemical analysis of the blood would give a seasonal average of body condition, while scat analysis might reveal a snapshot just from the hare’s stay in the trap.
Poop also comes up quite a bit while doing animal tracking. From seed-filled bear scat to hairy wolf turds, and even the frass of caterpillars and leaf miners, animal poop can tell us a lot about who lives where and what they are eating.
Little piles of worm castings can even clue us in to when these non-native wigglers have moved into our woods.
So, as a naturalist, I don’t think it’s weird that I spend time looking at, thinking about, and teaching about poop. I don’t even think it’s weird to Google it.
And today, I’m glad I did! I’ve always been taught that the white part of bird poop is their version of urine. It is concentrated uric acid that goes straight from the kidneys to the cloaca because birds don’t have a bladder.
Water is reabsorbed in the cloaca, which reduces the need for birds to drink. It gets excreted at the same time as their feces – the dark parts of bird poop. At least that’s the conventional wisdom.
In 2019, a researcher following his curiosity and a hot tip from an ornithologist, analyzed poop from six varied species of birds. Instead of uric acid, he found ammonium urate, struvite and two unknown compounds.
The resulting hypothesis is that birds do turn their wastes from protein digestion into uric acid, but that bacteria in their cloaca break down the uric acid into other materials before it leaves their body.
So much for conventional wisdom!
That doesn’t explain why I suddenly saw so much bird poop on my trees, though. That occurrence has several causes.
First, I have many more birds than usual at my feeder. The repolls have more than tripled my population counts!
Second, the cold weather meant that birds were eating a TON in order to stay warm. Eat more, and you have to excrete more, too.
Finally, birds tend to poop during lift-off. This lightens their load and makes flying more efficient. So, when they take off from my hemlock boughs, they leave a little package behind. In the sub-zero temps of those weeks, the poop froze to the needles and built up over time.
Next time your favorite three-year-old starts talking about poop, maybe you’ll have to join them in some scientific discourse.