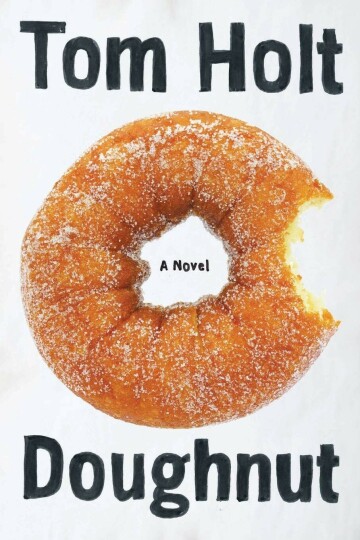 I reviewed The Outsorcerer’s Apprentice in my Oct 29, 2020, column. I thought it was hilarious, but was unaware that it was the third in a four-part series involving the multiverse and the YouSpace device.

Book 2 is a sequel of Book 1. We are introduced to King Mordak of the goblins in Book 2, where he is clearly a caricature of Rupert Murdoch, but he is a major character in Books 3 and 4, where he evolves into a politician.

Theo Bernstein’s friend and tutor, Professor Pieter van Goyen recommends him to run the Very, Very Large Hadron Collector, which has been built into a mountain. But Theo makes a mistake in his calculations, and the VVLHC blows up, reducing the mountain to ash.

Theo’s right hand is there, but invisible. He loses his job and his wife, and he’s overqualified for flipping burgers. He gets a job at the slaughterhouse taking offal and putting it in trolleys for disposal. He smells like sheep guts, so he can’t find lodging.

He gets a letter from a lawyer’s office telling him that Professor van Goyen has died and left him an inheritance. There is some cash, and a tin box which contains an empty bottle with writing on it, a lady’s compact full of pink powder, a manila envelope, an apple, and a note telling him he can get a job at his friend Bill’s hotel.

He goes to the hotel, which looks deserted, but Bill gives him a job and introduces him to his co-worker Mattie, a beautiful young girl. He soon realizes that Bill and Mattie have an unnatural desire to see van Goyen’s inheritance, and tries to keep the items from them.

Van Goyen has invented YouSpace, and tells Theo to have fun with it. It keeps taking him to places where people try to kill him. Instructions are confusing, and the program is unreliable, so Theo assumes it is a Microsoft product.

He is confronted by a little old man who is described as somewhere between 90 and 106 years old, with few teeth and wearing a floppy hat. He is accompanied by his nephew Art, sometimes referred to as Lunchbox due to his eating habits. Art is 7 feet tall, with oversized ears, rail thin, incredibly strong, and has his pockets stuffed with sandwiches and snacks, which he is constantly eating. They give Theo a summons for violating the injunction filed by his paranoid sister Janine. Janine, who has always had anger issues, was once denied entrance to her senior prom because she failed to hide her axe well enough, and now thinks that Theo is in cahoots with her doctor to have her put away. She spends her money cycling through rehab clinics.

Theo’s older brother Max, a charming cheat who people grow to hate, is presumed dead after a pair of his custom made shoes and a tooth are found next to a quicklime pit in Honduras.

In YouSpace, Theo gets hints that Professor van Goyen is alive and traveling with a man named Max, who might be his brother. Then people, including his sister Janine, begin asking him to bring Max back.
It seems every universe has someone frying doughnuts. The problem comes in getting one.

Maurice Katz has been found snogging with his best friend, Stephanie “Steve” Wilson. Steve has joined the Army, so she is the first person he calls when he kills a hydra in his bedroom. She has a phone number for Rockchucker Disposal Service. When they arrive, it is a little old man and his nephew Art, who is constantly eating. They dispose of the body and clean up the blood, but when they leave they tell him that the girl was payment for the device. Steve is gone.

Maurice is losing his job, so he visits his old classmate George, who has made a fortune. George lends him money after he signs all the documents, payment schedules and penalty clauses. George also tells him that he and Steve are getting married.

Maurice gets a job with Carbonic Company, an organization with a peculiar style. Their office building is in the shape of an upside-down pyramid. At the base is the top floors, with large offices and a few people who do nothing. The middle has smaller offices with some people who do very little. Maurice is put in the peak of the pyramid, which is the subbasement. He has no office, just a nail to hang his coat on, and he is expected to do the bulk of the work. It consists of moving very heavy boxes around. He gets notes telling him which boxes to leave out for delivery.

The delivery men are a little old man and his nephew, Art. Art has his hands full of kidney pie, so the old man hoists the boxes into the van. They tell Maurice they can’t tell him where the warehouse is.

Max wants Maurice to rescue his brother Theo. He gives him a bagel, Maurice looks through it, and suddenly he is editing a paper for Rupert Murdoch. OK, his boss is a goblin named King Mordak, but there isn’t a dimes worth of difference.

He is told that the only reason for newspapers is to keep track of the days. The date is the only thing in the paper that is an unassailable fact; the rest is made up.

Theo Bernstein appears to be bottled up, Steve is boxed in and Maurice loses the Best Hero award to Hercules.

Benny Gulbenkian is tall and lean, his uncle is short and fat, but they do happen to wear the same shoe size. Uncle Gordon is not in Imelda Marco’s league when it comes to shoes, but he seems to have a lot of pairs which are seldom worn, so Benny often just picks out a pair to wear.

While searching for shoes in his uncle’s closet, he finds a YouSpace device and a doughnut. Looking through that doughnut takes him to a Fairyland where he is the handsome prince.

King Mordak is still drinking his margaritas from the jewel encrusted skull of his predecessor, but now he is a savvy politician. He has noticed how the humans are pitting him against the dwarves to enrich themselves, and is determined to forge an alliance with them to control the price of ores. The wizard is not happy.

King Mordak has been Enlightened. The sign across from his desk says: “Elves – not just for breakfast anymore.” He is promoting a New and Improved Evil, and he has won a Lifetime Achievement in Evil Award from the Academy of Darkness.

He has bought up all the Elf-owned papers – “Sneer,” “Supercilious!” and worst of all, “Beautiful Golden Face,” which he has renamed “Horrible Yellow Face.”

Of course, all the Elves have been laid off.

Efluviel the elf had written things about Mordak for that paper. She thought they were made up stories, but they happened to be true, which impressed Mordak. He thinks she is a great investigative journalist, so he offers her a job. He wants to know where the humans are getting all the money to buy dwarf armor.

The Dark Lord wants to know that too, so he sends Mordak to accompany her on her quest.

Meanwhile, goblins are using YouSpace to clean up on American movie sets. Much cheaper than CGI.