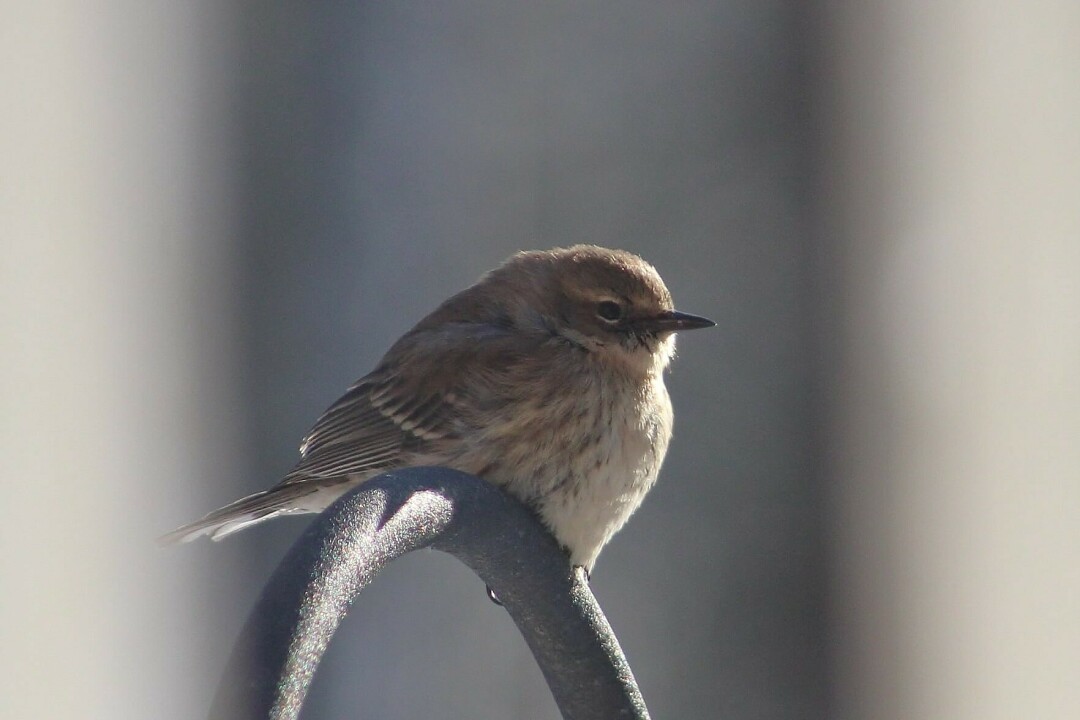 As days lengthen and the sunshine strengthens, I start dreaming ahead toward spring.

We all have our favorite signs of the new season, I’m sure, and one of mine is hearing the sweetly whistled trill of a yellow-rumped warbler, and then catching a glimpse of their “butter butt” as the namesake patch of color is revealed.

Yellow-rumped warblers are some of the first of our summer breeders to arrive and often seem in no hurry to leave. That’s because they don’t need to migrate all the way to Central or South America to find insects to eat.

Instead, they survive the winter by nibbling on the fruits of wax myrtle trees common in the southeastern United States.

Still, we don’t expect to see them by the time temperatures plummet and blizzards blow in. That’s why museum volunteer Jan Sharp was both surprised and worried when she spotted a yellow-rumped warbler in her yard in Clam Lake, Wis., on Dec. 4, 2021.

An avid birder, Jan started posting updates and observations to the Chequamegon Bay Birding Facebook group right away. Her posts revealed a mix of hope and trepidation for the bird’s predicament.

On Dec. 21, Jan made detailed introductions on Facebook, and explained her efforts to help the warbler survive:

“This is Myrtle. She’s a yellow-rumped warbler. She’s not supposed to spend the winter here. She’s supposed to be only as far north as St. Louis. She’s a first-year female, and I guess with the warmish fall we’ve had, she missed the memo about migration (or is sick or hurt): She likes the nuts and berry suet, and sunflower seed (shelled):

“She’s gutsy, and smart, and skulky. And I’ve put little grass-lined huts out for her, too (I doubt anything will use them): I doubt she’ll make it through the winter, especially if we have more polar vortexes. But I admire her spunk and will to live. Pretty amazing creature. (And she’s a new record on the Clam Lake Christmas Bird Count!)

During the course of several weeks – and several extreme temperature swings – Jan kept us all posted on Myrtle’s feeding schedule, the level of fluff in her feathers, the condition of her tender feet, and her interactions with other birds. Then, on Jan. 20, the news came: “Sadly, I believe Myrtle is no longer with us. I have not seen nor heard her all day. She had a shaky foot yesterday morning and I felt it was a red flag as the cold seemed to get to her feet first. And with the -19 degrees F this morning, I think the cold weather finally took its accumulated toll. What a survivor. I celebrate her grit, her brains, her persistence and her resilience.”

Meanwhile, as Myrtle was failing in her battle against a Northwoods winter, huge flocks of redpolls were moving in. These little brown birds have been whirling under bird feeders across the region in much higher numbers than usual.

It’s an irruption year for several species of northern seed-specialist birds. (No, not an eruption, although sometimes I do imagine a volcano of boreal forest in Canada spewing forth a feathered ash cloud.) 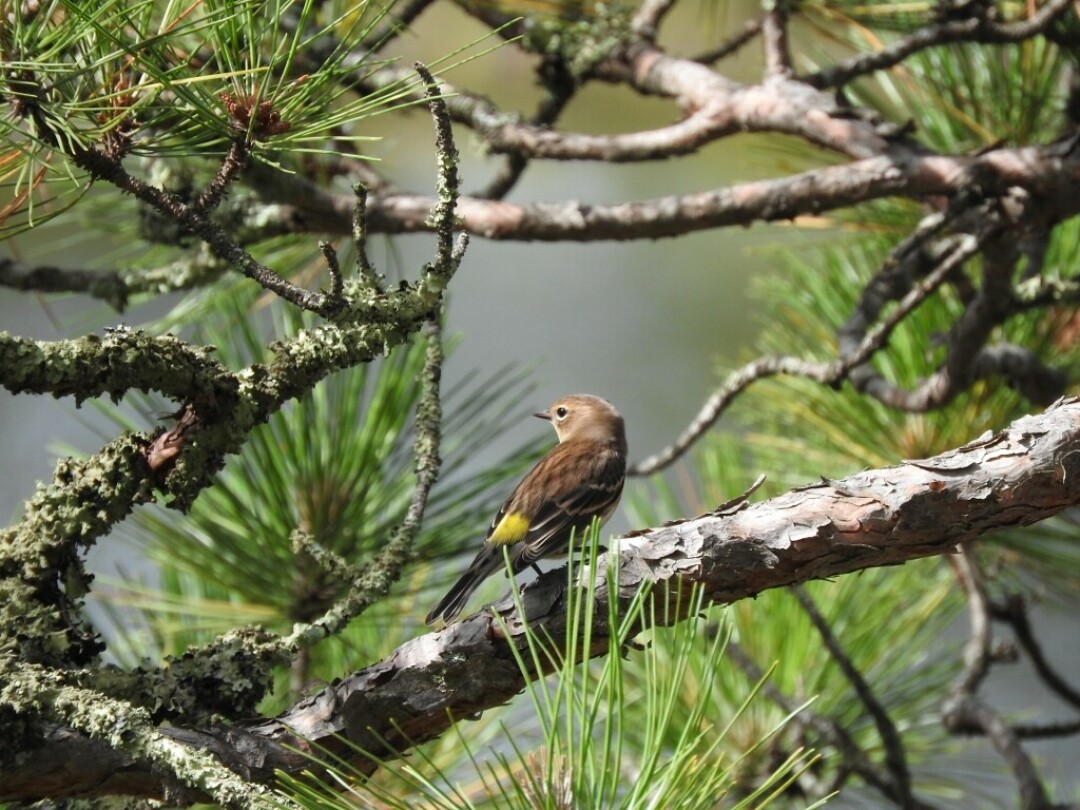 This yellow-rumped warbler was preparing for fall migration while the weather was still warm in September 2019. Photo by Emily Stone.

A bird irruption, according to the Cornell Lab of Ornithology, is a “movement of northern-wintering species to the south in years of low food availability.”

This year, redpolls are the most common out-of-town guests at my feeders. With a jaunty red cap and rosy breast to brighten up their brown and white stripes, they are very welcome. For weeks, if not months, I’ve been watching them flutter over the snow surface scooping up the delicate seeds of birch.

Now, with the blizzard, they’ve come to my feeder and are nibbling at sunflower hearts right along with the chickadees.

Even as temperatures drop again, I’m not worried about the comfort of these little friends. Myrtle may have needed our concern, but redpolls are built for the cold.

Remember, the Northwoods are south for them! Each autumn, just when we’re pulling sweatshirts and down vests out of our closets, the birds increase their insulation. Redpolls grow about 31% more feathers by November.

Then they take a hint from ruffed grouse – by diving under the snow to stay warm. Their tunnels can be more than a foot long and four inches under the surface. For such a tiny bird, that is impressive!

Even while buried in the snow, redpolls can keep eating. There’s a pocket in their neck where seeds collect and then trickle down into their stomach. These seeds fuel the bird’s metabolism and allow them to maintain their body temperature without a mid-nap trip to the refrigerator. With all these adaptations, tens of millions of redpolls survive in their rugged homelands surrounding the Arctic Ocean at the top of the globe, and we get to enjoy their visits every few years.

Emily Stone is the Naturalist/Education Director at the Cable Natural History Museum. Her award-winning second book, Natural Connections: Dreaming of an Elfin Skimmer, is now available to purchase at cablemuseum.org/books and at your local independent bookstore, too. For more than 50 years, the Cable Natural History Museum has served to connect you to the Northwoods. Follow us on Facebook, Instagram, YouTube, and cablemuseum.org to see what we are up to.