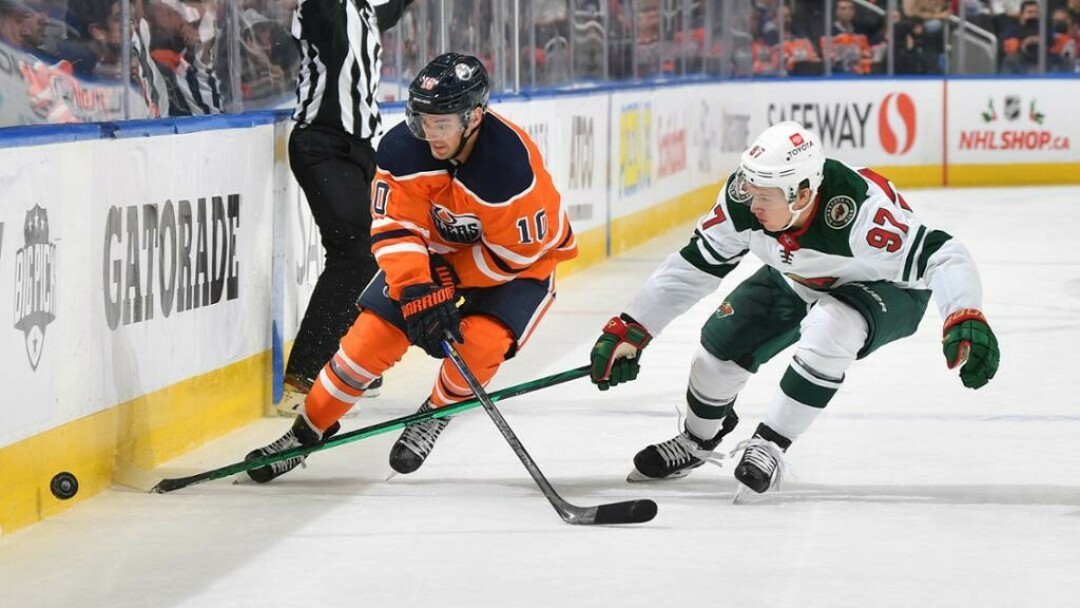 Kirill Kaprizov defends against the Oilers Derek Ryan in a 7-3 WILD win.

LAKESIDE – The 2022 Olympic Winter Games in Beijing have officially concluded. It seems that they came and went like a lightning bolt in the summertime sky.
As there are with many things of this magnitude these games had their high spots and had some problems. Doping issues and politics reared their ugly heads into this athletic spectacle but I’ve seen it before. I thought back a bit to realize that the first Olympics I saw that I remember anything about would have been the 1964 games in Tokyo.

I would have been somewhat young to understand if there was any controversy. That would change in the 68’ and 72’ games. And there has been some co-mingling of politics and sports since then that most fans could do without.
The original tenet of the games was for nations of the world to get together in the spirit of athletic competition and to hold high the standards of sportsmanship and the like. And then I guess humans got involved (intended sarcasm).
The USA Women’s hockey team won the silver medal and it was a letdown to be sure. In retrospect it was what I believed was the likely outcome of the women’s tourney.
In following the women’s game closely at this level when I saw the 2021 IIHF Women’s World Championship last August and Team Canada put on a dominating show in a 5-1 Gold Medal win I knew the U.S. club was in trouble.
I’ve referred to the personnel losses of the Lamoureux twins, Meghan Duggan and Gigi Marvin and the relatively young players who have replaced them.
It was in my opinion though before the games that the U.S. squad would be in tough. And they were. As expected both the U.S. and Canadian teams made it to the Gold Medal game. In the game itself the Canadians built up a 3-0 lead and it wouldn’t be until late in the 2nd frame that Team USA would score to make it 3-1.

It would stay that way until almost the end of the game. The Yanks’ Amanda Kessel would notch one with 13 seconds to go to make it 3-2 and that would be the final score as well.
There will be an IIHF Women’s World Championship in late August. At some point I’ll take a look at four years down the road and guess what the National team roster will look like for the 2026 games in Italy.
There will be turnover on the American squad and there will also be some on Team Canada. But for now I’m thinking that the Canadians are taking a little break to celebrate. I am proud of our team for getting the silver. They earned it and they know they have some work to do. The next Olympics starts – right now.

THE USA MEN’s HOCKEY team did not medal. After going 3-0 in the preliminary round they were eliminated immediately in the quarterfinals by Slovakia in a 3-2 SO loss.
The American team led 2-1 late in this contest before the Slovaks tied it up with 44 seconds left. The OT frame would prove nothing and then the Slovaks won a five-round shootout by a 1-0 score.
Team USA was eliminated. It would be the 3rd consecutive games the U.S. entry has not medaled. The immediate aftermath was quite a low point for me. I came in without expectations. Then I got excited by the success of the preliminaries only to get body slammed in the quarters.
The young U.S. squad played hard but could not finish on several scoring chances that would have given them the cushion to withstand the late Slovak charge.
As quickly as the men’s tournament had begun, it was over, and the Americans were on their way home. The Slovaks would lose to the eventual Gold Medal-winning Team Finland in a 2-0 shutout. Team ROC would make their way to the final where they would drop that game in a 2-1 loss to the new Champion.
The Finns had the brother of former WILD star Mikael Granlund on the roster. Markus Granlund would finish the games with 1 point in 6 games but does play a solid 200-foot game.
Where does the men’s tourney go from here? There has been a lot of dialogue in the past about moving the ice hockey competition to the summer games so there would be no conflict regarding NHL player participation.
But the IOC has been dragging its feet on the issue. In the end the fans do not see a best-on-best tourney and the countries you would expect to have strong showings in a format of that nature come away with nothing for their efforts.
The Canadians went home without any medal as well. It is beyond time for the IOC and the IIHF to fix this. And the only way to do so is to move this competition to the summer games. Just do it already.
THE MINNESOTA WILD had a topsy-turvy week going 2-2. They bested a still developing DET Red Wing club 7-4. Then they dropped two pretty ugly games in one-sided losses to WIN (3-6) and FLA (2-6) before finishing the week in Alberta where they put a pounding on the EDM Oilers in a 7-3 tilt.
After the two week-night games went awry, the alarm bells going off among the club’s diehard fans were deafening. They were ugly efforts to be sure but in an 82-game season those kinds of situations will happen. Like the coaches approach it a good perspective is necessary and in a long campaign you can’t get too high or low. If you let it gnaw on you, you would be burned out by December.