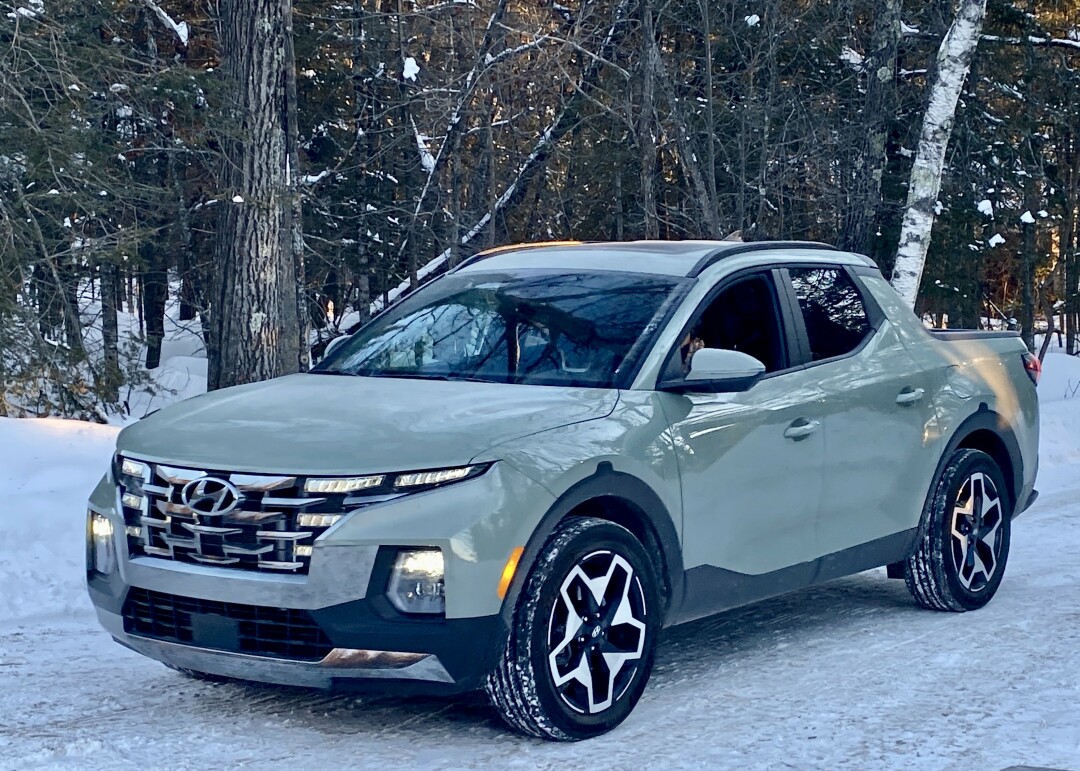 When, I hear you ask, is a pickup truck not really a pickup truck?
Interesting question, in this era when people are buying fancy and luxurious pickup trucks faster than new cars, and yet most people who buy pickup trucks admit they only really need the pickup capability a few times a year, and might privately admit they prefer driving a car.
The more macho pickup owners, who need pickups for work or because they own a farm, speak disparagingly about compact pickups as if they were playthings. The Honda Ridgeline suffered that criticism when it came out, with excellent versatility and greater economy, but lacking the tough image. So Honda redesigned the Ridgeline a couple of times, and now it can be mistaken for a “real” pickup at a glance. The sudden emergence of some downsized compact trucks muddies the picture some more.

And now we have a South Korean entry — the Hyundai Santa Cruz.

It came out several months ago, right in the midst of Hyundai’s surge upward in safety and initial quality surveys that helped the technologically advanced company keep making a profit and increasing sales when most other companies were struggling to get parts and turn out vehicles.
My first chance to test drive a Santa Cruz came just as this seemingly endless winter of 2021-22 was biting hard into the comfort zone of Northeastern Minnesota residents – of which, I happen to be one.
Eagerly, I went out to try the Santa Cruz in various circumstances from our Duluth area home, up and down the hills, and up and down the North Shore of Lake Superior.
Having become fully familiar with Ford’s F150, Chevrolet’s Silverado, Rams of all denominations, and Toyota’s Tundra and midsize Tacoma, my first opinion of the Santa Cruz was that “this ain’t no pickup truck.”
And maybe it ain’t, as they say in pickup land. But maybe it’s perfect for that vast number of pickup buyers who might rather be driving a midsize SUV and getting peppy performance, sporty handling and fuel economy that can range up to about 30 miles per gallon.
And still have that stylish bed in back to haul building supplies or wet scuba gear a couple of surfboards or a couple of bikes – bicycles or dirt bikes.
Furthermore, it has the eye-appeal that has helped Hyundai upgrade such popular SUVs as the Tucson, Santa Fe, Kona and Palisade in the last couple of years.
In fact, it struck me as curious that Hyundai regenerate the name Santa Cruz, because the company made a luxury SUV called the Santa Cruz up until a few years ago, when the aforementioned stable of SUVs seemed to squeeze it out of room in the showroom.
The base model is a real bargain at just a little more than $25,000, with a 2.5-liter four-cylinder. The upgrade is the same engine with turbocharging, which boosts it from 191 to 281 horsepower and lifts the towing capability to 5,000 pounds, and zooms the sticker price up to about $37,000.
The Santa Cruz comes only as a four-door, so you might be right in thinking of it as two-thirds of an SUV, with the other third being a composite bed that steals several good ideas from competitors.
There is a hidden and lockable cargo storage bin, for example, similar to one of the Ridgeline’s most popular features, and there are tie-down anchors that can be moved, a much-loved feature of Nissan’s pickups.
The composite material also is a Ridgeline staple, making the bed abrasion-proof and free of the kind of nicks and dings that prompt pickup buyers to spring for a spray-in bedliner.
All of that meets the requirements of a pickup truck, but otherwise, it is a great looking and sporty compact SUV.
First, from the front, it shares the flashy grille and headlight application of the new Tucson, and that fits, because it rides on an elongated Tucson platform with its unibody build. The sleek lines carry over the hood and front half of the body, as well.
When you climb behind the wheel to drive it, the Santa Cruz further might play with your mentality.
After driving along the North Shore and heading to downtown Duluth, I had barely made it 10 miles when I remarked that you have to remind yourself that you have a pickup-like vehicle here, because it has agility and maneuverability of a high-tech midsize SUV.
It feels wide and roomy, because it is. Its 2.5-liter turbocharged engine feels quick off the line and in passing/merging situations, because it is potent, and its 8-speed dual-clutch transmission is perfectly tuned to handle that power and distributed to all four wheels.
And it has steering wheel paddles if you want to have more control of its operation, allowing you to easily downshift for descending hills or slowing coming off an exit.
You also have driving modes, to switch from eco to normal to sport.
One very neat feature is that while you can easily carry four or five adults with stuff in the bed, one of the serious drawbacks of pickup trucks is that you hate to run into a store or anywhere else and leave your personal stuff exposed back there. So the Santa Cruz has a built-in tonneau cover over the bed, but it’s not something you have to wrestle off and work to put back on. It is made of strips of composite stuff, and when you get out, you can use the key fob to lock the doors, and then hold the switch just right and the whirring you hear is that cover transitioning from a rolled-up window-blind type of thing to a perfect-fit tonneau cover that locks over the bed.

Hyundai had to decide about which vehicles would get its extremely impressive hybrid or electric vehicle powertrain, and as a new vehicle, the Santa Cruz didn’t make the list for its first year.
I was totally impressed with Hyundai’s hybrid in the Tucson and Sonata cars, and the Tucson hybrid powertrain would easily fit under the Santa Cruz hood and body.
My guess is that it will be quite promptly added, especially since Ford has recently come out with an extremely popular compact pickup called the Maverick, and it comes in standard form with a hybrid powertrain.
Maybe some macho pickup guys will scoff at the Maverick, but it won’t matter, because so many buyers are clamoring for one Ford has stopped taking orders until, like, July. So if Hyundai wants to play with the big hitters by introducing a pickup of its own, the Santa Cruz deserves to be fully armed.
For certain, non-pickup types will see the Maverick as a pickup, and if that leads them to the Santa Cruz as an alternative, Hyundai will be happy to sell them one.