Love and marriage (and cooking) 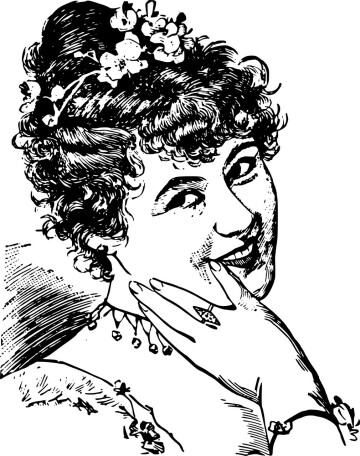 Once you got 'em laughing, you got it made.

In Tom Holt’s book "Doughnut," he describes a young lady giving a laugh which is not humorous in the least, but is throaty, sexy and the kind of laugh a female produces when she is attracted to a guy. They either learn this laugh when they are very young girls, or maybe it is just something that is in their DNA.

I know it’s hard to believe, but I have heard that laugh being directed at me as a teenager, when I was wrestling on the lawn with the neighbor girl. I was not the sort of boy who would be forward enough to instigate a match of this kind, and I assure you, it was all her idea.

The laugh struck a chord deep inside me, and I instinctively knew what it meant. It was, to put it bluntly, a mating call.

Unfortunately, it also struck a chord in her mother, who immediately called her daughter home before the laugh could fade away. This was no coincidence either, because it happened more than once.

I was married twice, and I don’t remember either of my wives using that laugh on me. Of course, they both could tell that I was hooked from the first, so maybe it wasn’t worth the effort.

When I was safely married, our neighbor boy was a talented and handsome lad. Across the street, an attractive young girl used to come out in the street to practice her baton twirling. One summer evening, I heard that laugh coming from out in the street. I looked out to see the neighbor boy chatting up the prospective majorette.

I don’t know if her mother heard her. All I can say is that the next time I looked, they were off the street, so I have no clue how that situation developed.

It was the Great Depression when my parents married, so I’m pretty sure there wasn’t a great deal of Whoop-Dee-Dooing. They just got on with it, and supper would be on the table every night when my father came home from work.

My mother was a good cook. Of course, her mother had been a professional cook, My mother worked in her cafe as a teenager, and then worked for a wealthy Italian family in Minneapolis. I suspect that is where she learned to cook spaghetti sauce. It was with spare ribs, not meatballs, and always had a bayleaf floating on top that had to be taken off before we began eating.

My sisters and I have bemoaned the fact that we neglected to get recipes from her when we could, but then we decided that she didn’t really go by any recipe, she just put in a little of this and a little of that as she saw fit.

The American dream wedding begins with the engagement ring. Then the girl spends the next year or two thinking about who and how many bridesmaids she will have, Sometimes she will pick out the dresses they will wear. Photography of course – there has to be a lot of pictures to commemorate the event. Planning the Wedding Supper and the Wedding dance – where and with what band? Then they need a wedding ring and the DRESS. Especially the dress, which has to be an expression of the bride’s personality.

The big event happens, and goes off flawlessly. There are albums of pictures which go up on the shelf to be pored over for a few weeks, and then forgotten. Five years later, they may have a little one, and they are arguing about money; about half end up in divorce court.

In the old days, the divorce courts were inclined to think that the woman could not be expected to bring home the bacon, so she got everything. If she let him keep the car, the divorce was described as amicable.
Sometimes there is cheating involved. Some people get away with it, and others do not, and sometimes they surprise the people that know them.

I thought my boss was a happily married man until we went to visit our mill in L.A. We got in the car to the airport, and the first thing he did was to take off his wedding ring and slip it in his wallet.
I met a couple I thought were the salt of the Earth. He was a millworker, and she was a mousy little woman who stayed at home. Then I found that he liked to have a few after work. He would come home and fall asleep, and she would call her boyfriend.

My wife’s divorce left her nothing, and mine left me with mostly debts, so our second marriage was done on the cheap. It was a happy affair even though we didn’t have two nickels to rub together. After the little party, we went home and put the kids to bed.

My wife’s mother grew up in an orphanage, so she learned to cook CHEAP meals. That stood her in good stead later, when they had a maximum of $10 a week to feed a growing family.
My wife made my lunches for 30 years, so it’s not that she couldn’t cook, but when it came to big meals,

I was in charge. This was especially true when we had family over for Thanksgiving or Christmas. I was always in charge of the turkey, mashed potatoes and gravy.

I never quite got the hang of making gravy, but it was good enough for family as long as they had plenty of beer.

A high school friend of my wife’s was a fantastic cook – her pork chops in mushroom gravy were to die for – so when we were invited to her parents house for Sunday dinner, we gladly accepted. This was the woman who taught her how to cook.

That Sunday, we showed up in our best bib and tucker for the meal of a lifetime. And it certainly was.
The night before Mr S. had stopped after work to tip a few, as he often did. He crossed paths with the day drinker on duty, a widow woman everyone knew. She had had a full day, and her feet weren’t operating properly, so Mr S. gallantly offered to drive her home. It was only a block or so, but hard to crawl with snow on the ground.

When Mr. S. went home, he mentioned that he had done that to his wife, with apparently no reaction.

The more she thought about it, though, the more it bothered her. By morning, the bone she had to pick with him had festered. It was not that he gave the widow woman a ride home, it was that he KNEW his wife was out of booze, and he didn’t stop at the liquor store before he went to the tavern, so she had to walk to the store, pick up the booze, and carry it home – she had to walk, and the widow woman rode home in style in their family car.

Their daughter said “We may as well eat. Everything’s done, and they’ll eat later.” So we did, and it was delicious.

A few years later, I was playing in a little band, and they asked us to play for the old folk’s 50th Wedding Anniversary. They had gotten a cake made, a bar with a small dance hall lined up, and relatives coming from out of town.

Three days before the party was supposed to go on, they called it off because they were fighting too much.

Another few weeks, and they called. The party was smaller, the cake was gone, and so were the out of town relatives. My band played.

I was standing there at intermission, when an old man approached me. “I was Best Man at their wedding,” he said. “ We never believed they would ever be married, they were fighting so bad.
So there’s another kind of wedding, folks. Start the fight at the engagement, and never give up. It’s a wonder they stopped long enough to have kids.